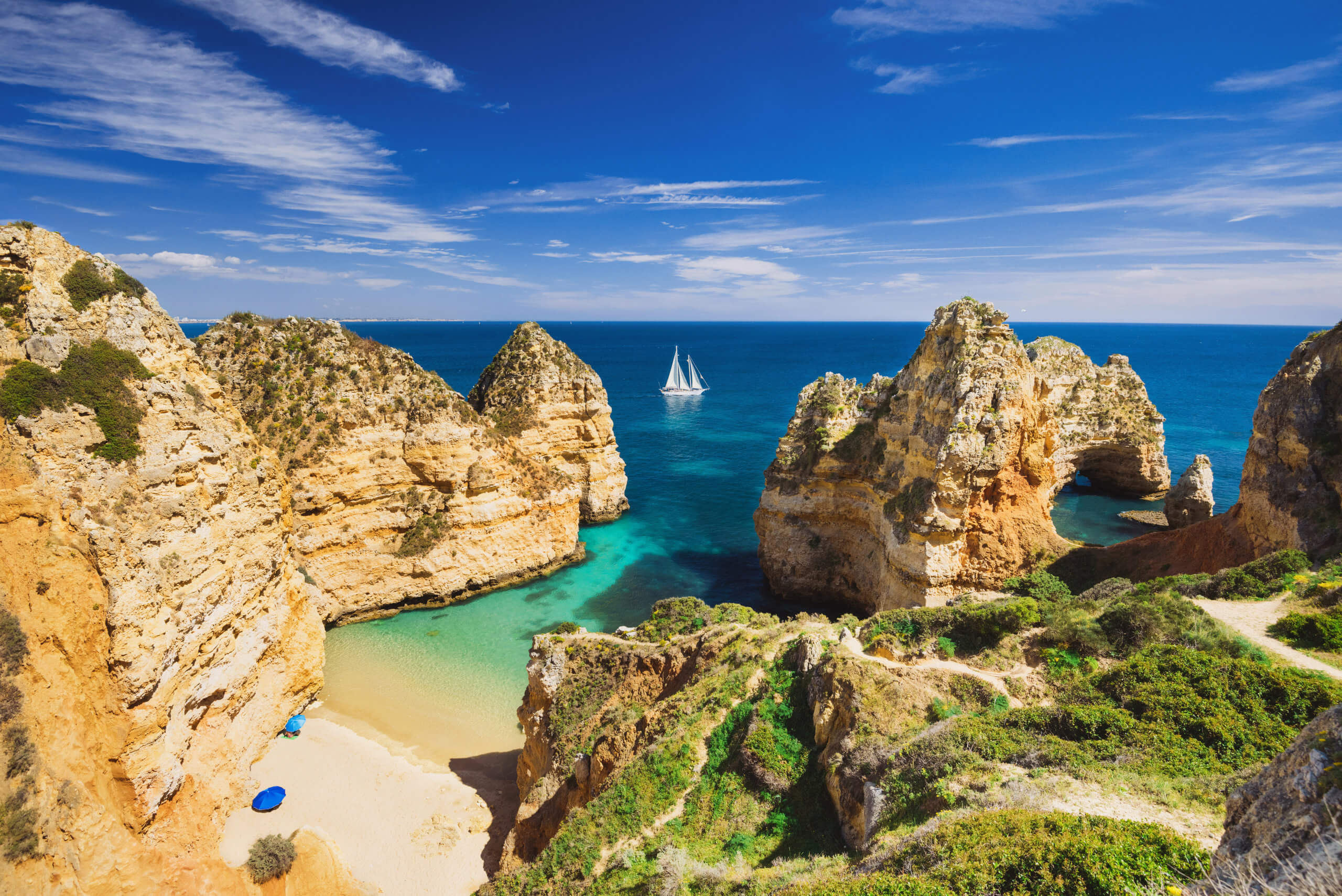 Explore sunny Portugal, with its miles of dramatic shoreline and legacy of global discovery. Along the way, discover the charms of Lisbon with your choice of included sightseeing. Enjoy a three-night stay in a beautiful resort town on the Portuguese Riviera. Meander its narrow cobblestone streets, oceanfront promenade and quaint bay area. In Evora, step inside a medieval walled city with Roman ruins.

• Spend three nights on the sunny coast of the Algarve.
• Stay three nights at a coastal resort on the Portuguese Riviera.
• Tour Lisbon, Portugal's capital that overlooks the Tagus River.
• Experience local cuisine and wine. Immerse yourself in the moving sounds of Fado.
• Indulge in a tasting of the Alentejo region's wines during a winery tour.
• Spend the night in the heart of the Alentejo region among vineyards and farmland.
• Stop in historic Evora, known as the "Museum City in Portugal."
• Venture to Lagos, where Prince Henry the Navigator began his explorations.

Day 2: Cascais, Portugal - Tour Begins
Your tour opens in a scenic coastal resort on the “Portuguese Riviera,” your home for three nights. The mansions scattered about Cascais and Monte Estoril hint at its history as a haven for exiled European royals and nobility. Tonight, join your fellow travellers for a welcome dinner.

Day 3: Choice of Lisbon Panoramic City Tour or Alfama District Walking Tour
This morning it’s your choice! Join a panoramic Lisbon city tour by coach and uncover sights that include Jeronimo’s Monastery (a UNESCO World Heritage site), Belem Tower (UNESCO), and the Monument to the Discoveries, with the tour capping off with a visit to the National Museum of Coaches -OR- embark on a walking tour* of the historic Alfama District, Lisbon's most symbolic quarter. Step back in time on an exploration of this residential neighbourhood, which is considered a village within a city. Stroll the neighbourhood’s medieval alleys, narrow streets and small squares, and pass by beautiful churches, whitewashed houses decorated with tile panels and wrought-iron balconies adorned with pots of flowers. Next, climb the hill to explore the castle, which boasts the most breathtaking panorama of the city. Later, enjoy leisure time in the Portuguese Riviera. Stroll the narrow cobblestone streets, sit in a seaside café, walk wide oceanside promenades, or shop for ceramics, lace, filigree, hand woven works and tapestries. This evening, savour excellent Portuguese cuisine and wine while local artists perform the traditional Fado (UNESCO).

Day 5: Cascais - Evora - Alentejo
Travel the beautiful Portuguese countryside and stop in historic Evora (UNESCO), known as the “Museum City of Portugal.” Inside this medieval-walled city stands a 2nd-century Roman temple to Diana and the 16th century Chapel of Bones. Indulge in the full-bodied character of the region’s wines during a winery tour and tasting. Tonight, enjoy your stay in the heart of Alentejo’s countryside at a country resort set among 3,000 acres of farm land, vineyards, and cork trees.

Day 6: Alentejo - Sagres - Lagos - Algarve
Journey to the famous Algarve and discover the secrets of the 16th-century fortress at Sagres, home of Prince Henry’s School of Navigation and the “compass rose.” Garner magnificent views of beautiful Cape of St. Vincente, where 200 foot cliffs plunge into the Atlantic at the most southwesterly point of Europe. Next, explore the historic resort town of Lagos, where Moorish and Renaissance influences abound. Here, the famous voyager, Prince Henry the Navigator, began his explorations and from the harbour where Vasco da Gama sailed in 1499 on his epic voyage of discovery. Stroll through the fortress and historic buildings while taking in the surrounding ocean views during some leisure time.

Day 7: Algarve
The entire day is yours to experience the beautiful Algarve on your own. Geraniums, camellias and oleanders grow alongside fig, orange and almond trees, while brightly coloured fishing boats bob on the seas. Protected by hills to the north and warmed by the sea, the Algarve’s mild climate and beautiful beaches attract vacationers from all over the world.

Day 8: Algarve - Faro - São Brás de Alportel - Algarve
Journey to Faro, gateway to the Ria Formosa protected lagoon landscape. Explore the city’s historic centre with 9th-century Roman walls, dramatic golden coastline, and its archaeological and architectural gems. In historic São Brás de Alportel, a presentation by a local liqueur maker is followed by a tasting of some of the many varieties produced in the region. Portugal is the world’s number one producer of cork. Visit a local cork factory to learn about its importance to the local economy and its many uses. Complete your day with dinner featuring local delicacies and wine.

Day 9: Algarve - Azeitao - Lisbon
En route to Lisbon, make a stop in Azeitao, a charming agricultural village known for red wine, olive trees and beautiful country estates. Spend time at the centuries-old Jose Maria da Fonseca Winery. Embark on a tour followed by a tasting of local wines, including moscatel. Next, meet local artisans at a family-run shop that demonstrates how azulejos, the famous hand-painted Portuguese tiles, are made. Later, bid Portugal goodbye during a dinner to celebrate the end of a wonderful tour.