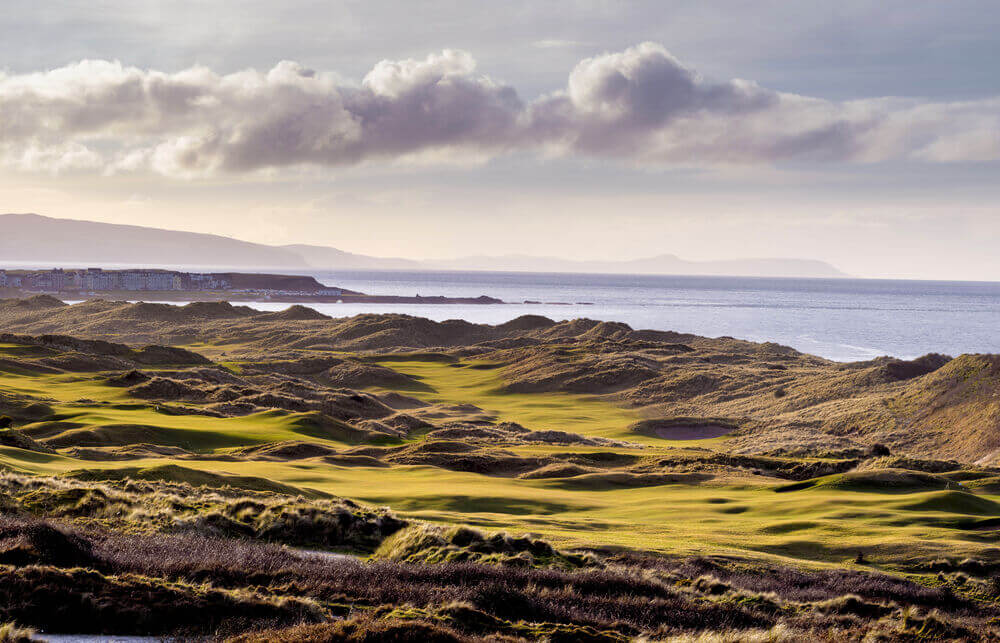 Enjoy once-in-a-lifetime golf experiences and classic sightseeing, all along the rugged coast of Northern Ireland.

Day 1
Arrive in Dublin, pick-up a SUV rental and drive north to the village of Portrush (drive time 3 hours 30 min). Check in to the Bushmills Inn for a 3-night stay. One of Ireland’s most well-known, luxurious four-star hotels, The Bushmills Inn is situated in an enviable location a stone’s throw from a host of visitor attractions including Royal Portrush Golf Club, Old Bushmills Distillery, The Giant’s Causeway, Carrick-a-Rede Rope Bridge and Dunluce Castle. Roaring peat fires, nooks and crannies and a secret library set the tone. In the bar, still lit by gas light, try a glass of malt from the hotel’s private cask and make sure to sample some of the finest North Antrim produce in the AA Rosette restaurant.
Once checked in drive 30 minutes to the Castlerock Golf Club, to play an afternoon round on one of Northern Ireland’s best kept secrets with stunning views across the coast on this challenging links course which will host one leg of the Northern Irish Open in 2022.

Day 2
Today, after breakfast you will head 10 minutes to Royal Portrush Golf Club to play a staff favourite course in all of Ireland, the Dunluce Course at Royal Portrush - home of The Open champion Darren Clarke and host of 2019 Open Championship and confirmed host of the 2025 Open Championship.
Simply put, Dunluce at Royal Portrush is one of the world's finest links courses and the only course in Ireland to have hosted the British Open. Famous for its magnificent turf, unimaginable rough and tricky greens, this course is an admirable test for a seasoned golfer.

Day 3
Today, following breakfast, you’ll motor 15 minutes west to play the Strand Course at Portstewart Golf Club.
The claim is often made that Portstewart has the best opening hole in Irish Golf – and some would suggest the world. Situated on Ulster's magnificent Causeway Coast, Portstewart’s fame goes back to 1951, when the course was used as a qualifying venue for the Open Championship at Royal Portrush.

Day 4
After breakfast, you will head 20 mins along the coast to Ballycastle Golf Club. Established in 1890, it is a founding member of the Golfing Union of Ireland. Despite some additions over the years, the course has remained largely unchanged since its final layout in 1926. It provides some outstanding views, from the ancient Bonamargy Abbey to the panoramic backdrop of Glenshesk and the Causeway Coastal Route.
After golf, just over an hour drive brings us to the Grand Central Hotel right in the heart of Belfast for a 2 night stay and the opportunity to soak up some of the city’s world class eateries and lively pub scene.

Day 5
After breakfast head to the second ‘Royal’ of the itinerary at Royal Belfast Golf Club.
Founded in 1881 Royal Belfast Golf Club lays claim to the title of the oldest golf course in Ireland. In 1885 the club became “Royal” after the Prince of Wales was invited to become its Patron during a visit to Ireland. The present course dates back to 1925, when responsibility for the course design and layout at the present location was given to H.S. Colt.
After golf you will have the opportunity to visit Titanic Belfast which once held the title of The World’s Leading Visitor Attraction and get right up close and personal with a Political Taxi Tour of the city which gives you an poignant and insightful journey through the areas most affected during The Troubles.

Day 6
Following breakfast we head to Belvoir Golf Club (pronounced ‘Beever’). Located just 3 miles from the city centre of Belfast. Golfers are shielded from the noise and sights of the city by huge, mature trees which line every fairway, many of which were well established in 1927 when the course was first built using teams of horses and hand ploughs. Largely unaltered since its design, the only changes to the course have been brought about by thoughtful planting of 40,000 new trees in the late 1950s. From the balcony of the imposing new clubhouse, the green fingers of the fairways fan out like avenues, giving panoramic views of the 9th green, 10th fairway, 13th tee and 18th green.
Following golf we head an hour to Newcastle and stay 2 night at the Slieve Donard Resort & Spa. Nestling at the foot of the Mourne Mountains, the 4* Slieve Donard stands in six acres of private grounds, and is one of Northern Ireland's most popular hotels and in walking distance to Royal County Down Golf Course.

Day 7
After breakfast head an 30 mins over to the Ardglass Golf Club. An 18 hole links course in a natural setting hugging the north-east coast of Ireland, with stunning views & unique golf holes, Ardglass is a true test of golf. With the almost ever-present wind capable of wreaking havoc from any quarter; the hard fairways and the small firm greens, it is just about impossible to play “yardage based” golf on this links. The Irish Sea, which can be seen from all 18 tees and greens, comes into play on no fewer than 8 holes.
Overnight and dinner at the Slieve Donard Resort & Spa.

Day 8
Following breakfast, you will play one of the best courses in the world – Royal County Down.
Rated by many, as the finest golf course in Ireland, if not #1 in the world, Royal County Down is situated at the foot of the Mountains of Mourne, and enjoys wonderful views across Dundrum Bay. Old Tom Morris is credited with the original routing in 1889, which was possibly the first course to ignore the then traditional layout of nine holes "out" and nine holes "back." Royal County Down was opened for play in 1891.
After golf, continue driving south to Dublin where you have a 1 night stay at the Fitzwilliam Hotel. Ideally situated in Central Dublin, overlooking St Stephen’s Green. The Fitzwilliam is known for its contemporary style and its warm Irish welcome. The city of Dublin is filled with places to explore. You may wish to give yourself an overview of the city by taking one of the Dublin Bus hop-on-and-off tours that will take you to all the main landmarks. Among the many highlights are the homes where the Duke of Wellington and Oscar Wilde were born, as well as the beautiful Christ Church Cathedral, St. Patrick's Cathedral, the Molly Malone statue and Dublin Castle.

Day 9
After breakfast, you’ll drive 30 minutes to Dublin Airport, return your vehicle and depart for home.

Subject to availability at time of booking. All offers are subject to Merit Travel standard Terms of Service. Additional terms and conditions may apply. As to images: © Tourism Northern Ireland.