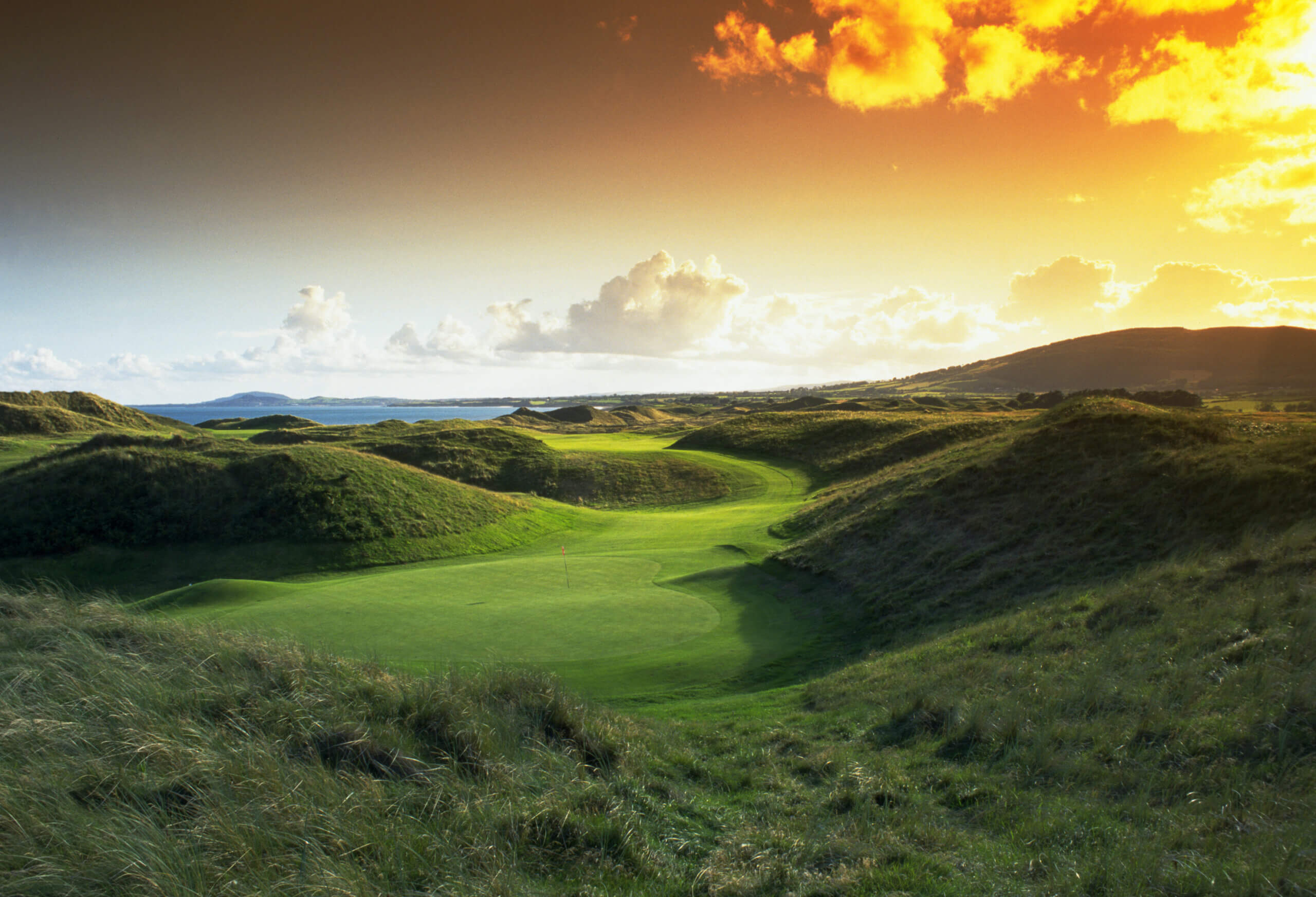 Enjoy once-in-a-lifetime golf experiences and classic sightseeing all along the rugged coast of Northern Ireland, with plenty of time in Dublin to immerse yourself in Ireland’s history and culture.

Day 1
Arrive in Dublin, pick-up a SUV rental and drive north to the village of Portrush (drive time 3 hours 30 min). Check in to the Bushmills Inn for a 3-night stay. One of Ireland’s most well-known, luxurious four-star hotels, The Bushmills Inn is situated in an enviable location a stone’s throw from a host of visitor attractions including Royal Portrush Golf Club, Old Bushmills Distillery, The Giant’s Causeway, Carrick-a-Rede Rope Bridge and Dunluce Castle. Roaring peat fires, nooks and crannies and a secret library set the tone. In the bar, still lit by gas light, try a glass of malt from the hotel’s private cask and make sure to sample some of the finest North Antrim produce in the AA Rosette restaurant.
Once checked in drive 10 minutes to the Royal Portrush Golf Club, to play an afternoon round on the Valley Course. Home of the U.S. Open Champion Graeme McDowell, this is a great links course that will both challenge you and reward good shots. (Great views also!!)
Day 2
Today, after breakfast you will return to Royal Portrush Golf Club to play a staff favourite course in all of Ireland, the Dunluce Course at Royal Portrush - home of The Open champion Darren Clarke and host of 2019 Open Championship. Simply put, Dunluce at Royal Portrush is one of the world's finest links courses and the only course in Ireland to have hosted the British Open. Famous for its magnificent turf, unimaginable rough and tricky greens, this course is an admirable test for a seasoned golfer.
Day 3
Today, following breakfast, you’ll motor 15 minutes west to play the Strand Course at Portstewart Golf Club. The claim is often made that Portstewart has the best opening hole in Irish Golf – and some would suggest the world. Situated on Ulster's magnificent Causeway Coast, Portstewart’s fame goes back to 1951, when the course was used as a qualifying venue for the Open Championship at Royal Portrush.
Day 4
After breakfast, you will drive south for a 1 night stay at Slieve Donard Resort & Spa
Day 5
Following breakfast, you will play one of the best courses in the world – Royal County Down. Rated by many, as the finest golf course in Ireland, if not #1 in the world, Royal County Down is situated at the foot of the Mountains of Mourne and enjoys wonderful views across Dundrum Bay. Old Tom Morris is credited with the original routing in 1889, which was possibly the first course to ignore the then traditional layout of nine holes "out" and nine holes "back." Royal County Down was opened for play in 1891.
After golf, continue driving south to Dublin where you have a 4 night stay at the Fitzwilliam Hotel. Ideally situated in Central Dublin, overlooking St Stephen’s Green. The Fitzwilliam is known for its contemporary style and its warm Irish welcome. The city of Dublin is filled with places to explore. You may wish to give yourself an overview of the city by taking one of the Dublin Bus hop-on-and-off tours that will take you to all the main landmarks. Among the many highlights are the homes where the Duke of Wellington and Oscar Wilde were born, as well as the beautiful Christ Church Cathedral, St. Patrick's Cathedral, the Molly Malone statue, and Dublin Castle.
Day 6
After breakfast, drive 40 minutes north to Malahide. Here you will enjoy a round of golf at the Island Golf Club. Established in 1890, The Island Golf Club enjoys a unique setting bordered by sea on 3 sides. A classic links course set in a rugged terrain & nestled between the highest sand dunes along the east coast.
Day 7
Following breakfast, you will drive north for 40 minutes to the Portmarnock Golf Club where you will play the Old Course. Portmarnock Golf Club is known as one of the world's truly great links courses. It was established in 1894 on a small peninsula extending into the Irish Sea and is surrounded by water on 3 sides. Located 10 miles North of Dublin city just south of Malahide, the quality and location of Portmarnock have made it a superb venue for some great events over the years, the British Amateur, the Canada Cup, the Walker Cup and some 12 Irish Open Championships.
Day 8
After breakfast, you will drive 1 hour south to Arklow and The European Club where you have another great round of golf. The European Club is located in tumbling dunes just south of Dublin and it features sweeping sea views from nineteen of the twenty holes. Yes, there are two extra par-3s here and they are in play most days affording the golfer a 20-hole round which includes five holes running very close to the sea. Enjoy your last round of golf on this epic trip!
Day 9
After breakfast, you’ll drive 10 minutes to Dublin Airport, return your vehicle and depart for home.

As to images: Tourism Ireland.