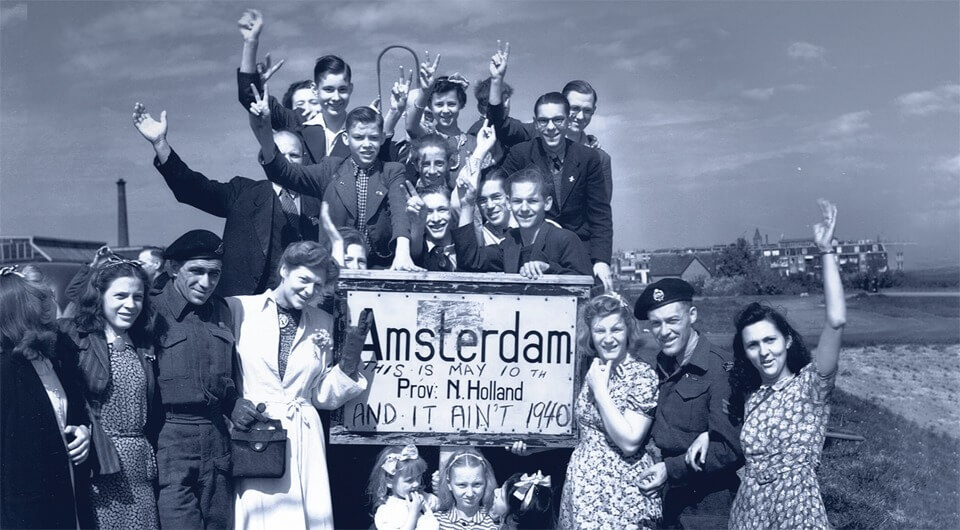 Fixed Departure – this is a tour package with a fixed departure date, fixed inclusions. While we may be able to make some additions, like a hotel night pre or post trip, most of what you see is what you get.

Join historian Ted Barris to commemorate the 75th anniversary of Canada’s liberation of the Netherlands from Nazi occupation. You’ll tour historic sites like the “Bridge Too Far” site at Arnhem, participate in Holland’s “Silent March”, join VE Day festivities at Apeldoorn and more! It’s a springtime journey when tulips bloom and the grateful Dutch pay homage to their Canadian heroes. As a special treat, we’ll also be in Amsterdam during the Dutch Grand Prix, which returns to the Formula 1 calendar after 35 years. If you’d like to attend, please enquire.

Day 2 | May 2, 2020 | Amsterdam (D)
Upon arrival at Schiphol Airport, your group will transfer to Amsterdam by private motor coach. We’ll explore the city on a narrated canal boat tour, passing gabled warehouses, arched bridges and colourful houseboats as we cruise Amsterdam’s
most popular attraction. Then you’ll check in at the Movenpick Hotel Amsterdam City Centre and enjoy a traditional welcome dinner.

Day 3 | May 3, 2020 | Nijmegen, Oosterbeek and Arnhem (B)
After breakfast, we’ll travel the Allied liberation route from Nijmegen to Arnhem, where Field Marshall Bernard Montgomery’s ill-fated Operation Market Garden. We’ll retrace their steps, touring bridge objectives and Oosterbeek’s Huize Hartenstein, former headquarters of the 1st Airborne and now the British Airborne Museum. We’ll continue west to the Old Dutch Reform church, for a little-told tale of valour by the Royal Canadian Engineers on the night of Sept. 24, 1944. Then it’s back to the hotel for rest.

Day 4 | May 4, 2020 | Amsterdam and Baarn (B, D)
May 4 is Remembrance Day in the Netherlands, when citizens commemorate all the civilians and soldiers who gave their lives. After breakfast, we’ll visit the Anne Frank House for a self-guided tour that explores the importance of Anne Frank’s life and diary in understanding the tragedy of the Holocaust. Next it’s on to Baarn for dinner and an evening of remembrance and celebration, as we join veterans and locals on their Silent March to mark the end of occupation. Then it’s back to the hotel for rest.

Day 5 | May 5, 2020 | Wageningen (B)
Liberation Day. After breakfast, we’ll visit Hotel de Wereld, one of the pivotal locations of the Dutch liberation. It was there, along the Rhine, that Canadian Gen. Charles Foulkes faced Gen. Johannes Blaskowitz as the German occupation forces formally signed unconditional surrender. Today’s ceremony marks the 75th anniversary and signifies the key role that Canadians played
in the Allied liberation of Dutch citizens. Afterwards, we’ll return to the hotel.

Day 6 | May 6, 2020 | Bergen op Zoom, Walcheren, Nieuwdorp and Delta Works (B)
After an early breakfast, we’ll travel to the north shore of River Scheldt, where the 2nd Canadian Infantry fought German artillery and entrenched infantry during the war’s final phase. 5,000 Canadians gave their lives and we’ll pay our respects at the Bergen op Zoom Commonwealth War Graves Commission cemetery. Then it’s west to Walcheren Island, flooded in the campaign to literally flush out the German troops. We’ll visit Westkapelle’s Polderhuis museum and meet the curator of the Nieuwdorp’s War Museum Infatuate, commemorating and Canadians’ role in the battle of the Scheldt. Finally, we’ll travel back to the hotel along the North Sea coast, crossing the historic Dutch Delta Works – the planet’s largest flood protection system and one of the Seven Wonders of the Modern World.

Day 7 | May 7, 2020 | Groesbeek (B, D)
After breakfast, we’ll visit Groesbeek’s National Liberation Museum, built where Major-General James Gavin landed with the U.S. 82nd Airborne as part of Operation Market Garden. Notable exhibits include the Dutch resistance’s secret closet for hiding and playing Radio Orange, the Human Rights wall and the tolerance test. You’ll taste Swedish liberation bread and see a bird’s eye-view model of Operation Market Garden and the Diorama of the Waal crossing. Before returning to the hotel for dinner, we’ll visit Groesbeek’s Commonwealth War Graves Commission cemetery and pay our respects to 2,338 brave Canadians killed in the liberation.

Day 8 | May 8, 2020 | Apeldoorn (B)
After breakfast, we’ll travel to the VE Day Parade in Apeldoorn, home of the royal palace. The annual event is an extraordinary outpouring of gratitude from Dutch citizens. Veterans, military organizations, marching bands and grateful civilians will line the
streets in a 75th anniversary tribute to Holland’s liberators – the Canadians, British, Americans and Poles among many. After the festivities, we’ll return to the hotel.

Day 9 | May 9, 2020 | Keukenhof, The Hague and Delft (B)
Following breakfast, we’ll travel west to the famous Keukenhof Gardens, likely the largest flower garden facility in the world. Well-marked paths take visitors through gardens bursting with the daffodils, narcissi, hyacinths and tulips of spring. Then we’ll continue to The Hague, with highlights including Parliament, Palace Noordeinde and the Peace Palace’s International Court of Justice. Then it’s on to Delft, birthplace of Vermeer but even better known for Delftware, the Netherlands’ iconic blue and white ceramics. After touring the factory, we’ll return to the hotel.

Day 10 | May 10, 2020 | Amsterdam (B, D)
After breakfast, we’ll visit Rijksmuseum, the Netherlands’ largest art museum. The world-class collection of nearly 8,000 pieces boasts revered paintings by Flemish and Dutch masters, including Rembrandt, Vermeer, and Frans Hals. The museum also offers extensive outdoor gardens and a Michelin-starred restaurant. The rest of your day is free to shop, explore and relax. At the end of the day, we’ll gather back at the hotel for our group’s farewell dinner.