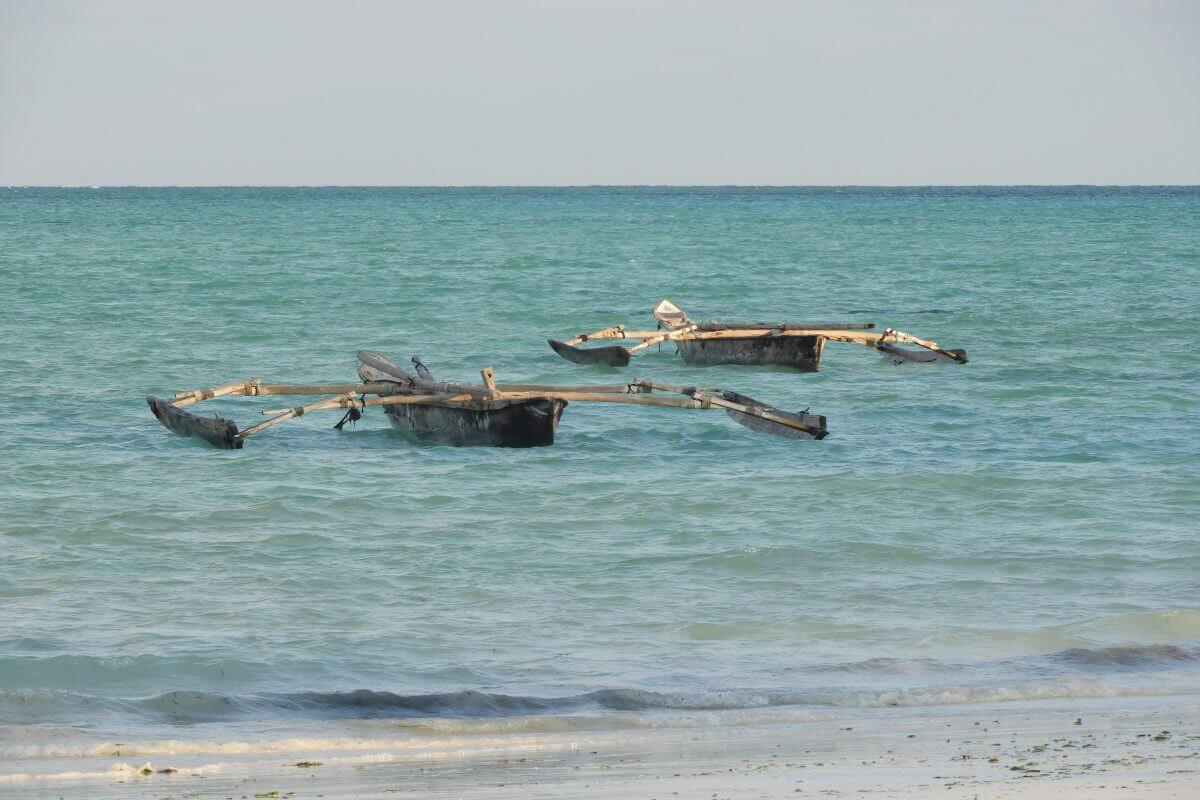 As we were climbing up the crater rim, it reminded me of climbing Kilimanjaro a little as we were once again ascending into the clouds. I hadn’t anticipated that we would once again be camping at altitude, although much lower at 2300m. The evening temperature dropped very quickly once the sun went down. At least this camp site had hot showers if you were lucky enough to beat the line-ups and they were delightful after the cold showers in the Serengeti.

One of my highlights of my trip to Tanzania was watching elephants walking and snacking on the bushes at the edge of the camp site. Watching these gentle giants a little more than 5 meters away from me while I went for a walk was a pretty special moment. 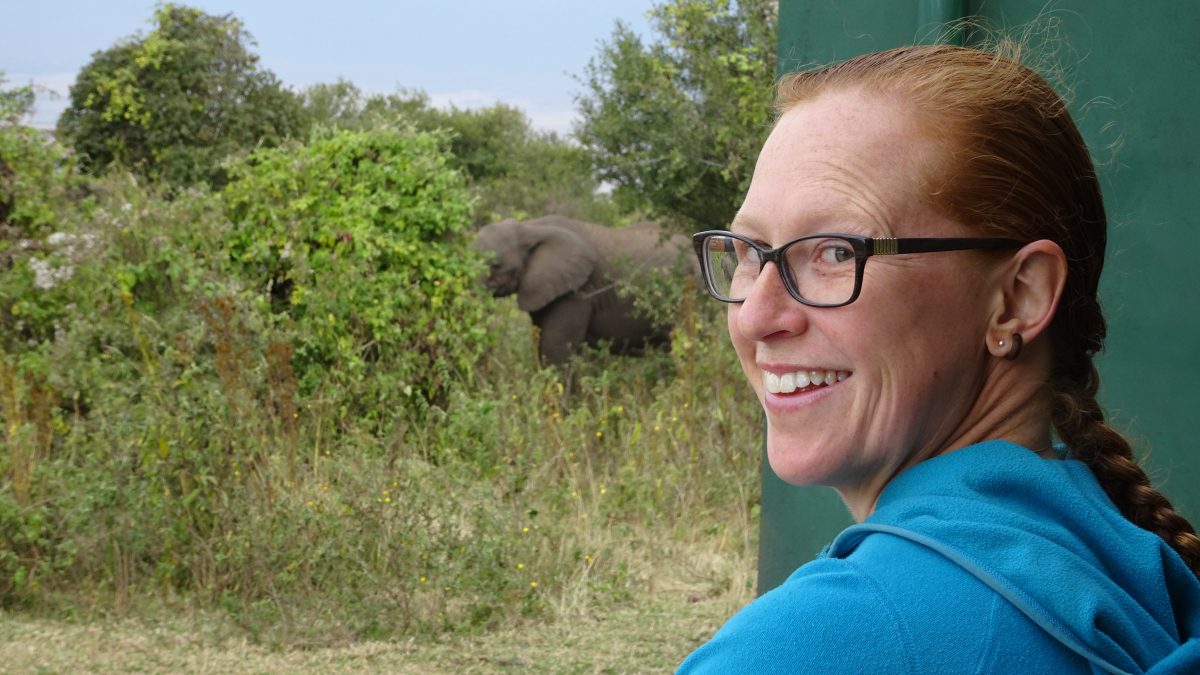 As this campsite was much bigger than the Serengeti and much more populated, it helped make me feel much less vulnerable to wildlife, even after watching the elephants so close. After dinner in the protected dining tent, we walked out to find the campsite covered with zebra’s. They were looking beautiful lit up by the moon.

Another dawn start for our last safari drive, this time in to the crater of Ngorongoro. On this morning we were on the hunt for Rhinos as they were about the only animal we had not yet spotted. Although there were no Rhino appearances we certainly weren’t left disappointed. We saw more mating lions, that actually rested on tyres. A large hippo filled pool, wildebeest, ostrich, grey crowned-cranes, helmeted guineafowl, egret, flamingos, zebras and elephants.

A family of elephants was spooked by something and they took off quite startled while we were watching. The noise they made was terrifying! If you’ve never heard the sound of a concerned/worried elephant, it’s a very unsettling sound to hear and nothing like I could have imagined. Once the threat was over, they went back to their business pretty quickly. Two of the teenagers started play flighting which was neat to watch.

I loved watching the orographic cloud formation fall over the crater rim. It reminded me a lot of “table cloth” over Table Mountain in Cape Town. I found the constant cloud movement very peaceful to watch. It was amazing how different the landscape inside the crater was compared to the rim and the Serengeti was. I didn’t expect it to be so varied within the crater; forest, salt lakes, wetlands and open plains all squeezed in to 260km². It looked very large from the view points along the rim, but once on the crater floor we really only needed a few hours to cover the ground.

We headed back to the campsite from lunch while the car was being packed up. We made the mistake of deciding to eat on the grass to enjoy the much-needed warmth of the sun after a chilly morning. We had barely taken a bite when we looked up and saw several eagles circling above us like we were prey. Needless to say we very quickly relocated into the safety of the dinning shelter. Once fed, we were back on the road to Arusha. At one stage a group of camels crossed the road in front of us which seemed very out of place! Certainly not one of the animals I ever imagined I would see in Tanzania.

After an exhausting few days on Safari we were happy to be having an early night and a real bed as we would be up before dawn once again for our flights to Zanzibar for some much-needed relaxation and down time. As soon we landed it was clear we were in a very different area of Tanzania! The heat was intense as soon as we stepped off the plane and everyone was dressed much more modestly.

Luckily there was an ATM located in the car park to top up with local currency as there would be no options in the area that we were staying in. We had booked to stay in Paje which is located about an hour from the airport across the island on the east coast.

Paje is a very relaxed area known for kite surfing. The long white sand beaches and shallow waters make it a great area to learn to kite surf. The relaxed atmosphere means it’s easy to leave your shoes at the hotel for the duration of your stay and walk barefoot along the beach every day. The beach is full of low key bars and restaurants making is easy to escape the heat of the day.

We had arrived at the start of the low season, so the wind was low and there were very few people along the beach. It was very quiet and a great way to relax at the end of a very busy trip. We spent the time walking along the beach, swimming, strolling through the small markets and enjoying watching people learn to kite surf.

I booked a dive while I was there as well and was very happy to see some creatures that I hadn’t seen before. I hadn’t been diving for quite some time so I definitely found it a little more of a challenge than I had expected. We left while the tide was still low and went out to the outer reef for the first dive. Here we dove along the reef wall and saw numerous colourful corals and small fish. Between dives we were replenished with ginger tea, water, fruit & cookies before heading onto the second dive site.

The second site was within the Jambiani lagoon and although there were not too many corals or species of fish about I was able to spot seahorses and sting rays which I had never seen before while diving. I was pretty happy after my dives and the colour of the water was even more beautiful being away from the shore.

After three days of relaxing and enjoying meals of fresh seafood it was time to head home. I was hoping to have one last swim before the flight, but unfortunately the tide was so low there wasn’t enough water for me to swim in without having to walk out several hundred metres. I had been out on the boat diving the morning before that the same time, but on my last morning it was like someone had drained the ocean! Such great tidal differences are not something that I am used to, nor was I expecting it. The low tide meant that a lot of the locals were out in the water swimming and fishing which was a nice to see rather than a beach full of tourists.

Zanzibar was the perfect way to end my Tanzania adventure. I would certainly recommend that everyone finishes their visit to Tanzania this way!