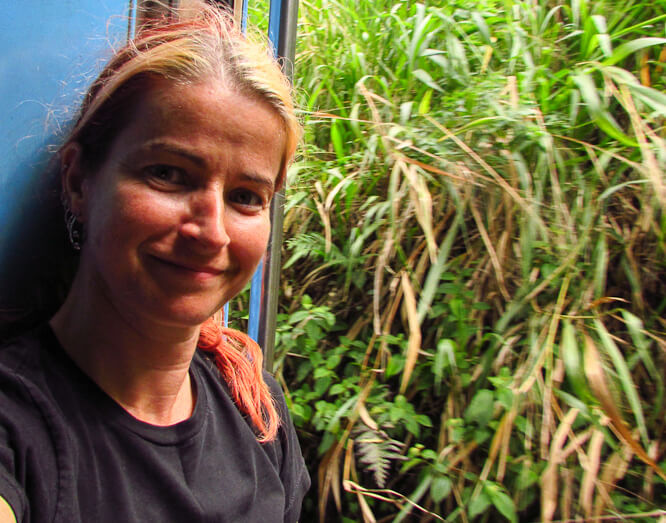 I escaped some of the brutal Toronto winter, and headed to beautiful Sri Lanka! What a great country with so much diversity for such a small country.

Sri Lanka is located just off the east coast of Southern India, but the culture and people seem so different from its neighbour. If I had to compare them I would say that Sri Lanka is a middle class, much cleaner, less congested country than India. It also has a majority of Buddhists. India is primarily a Hindu country. I still love India, but I think this might be a good warm up for anyone who doesn’t want the culture shock. 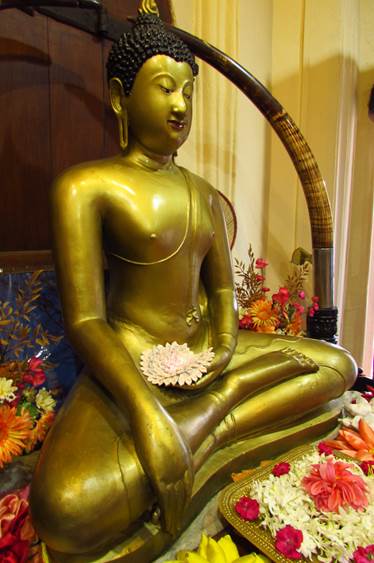 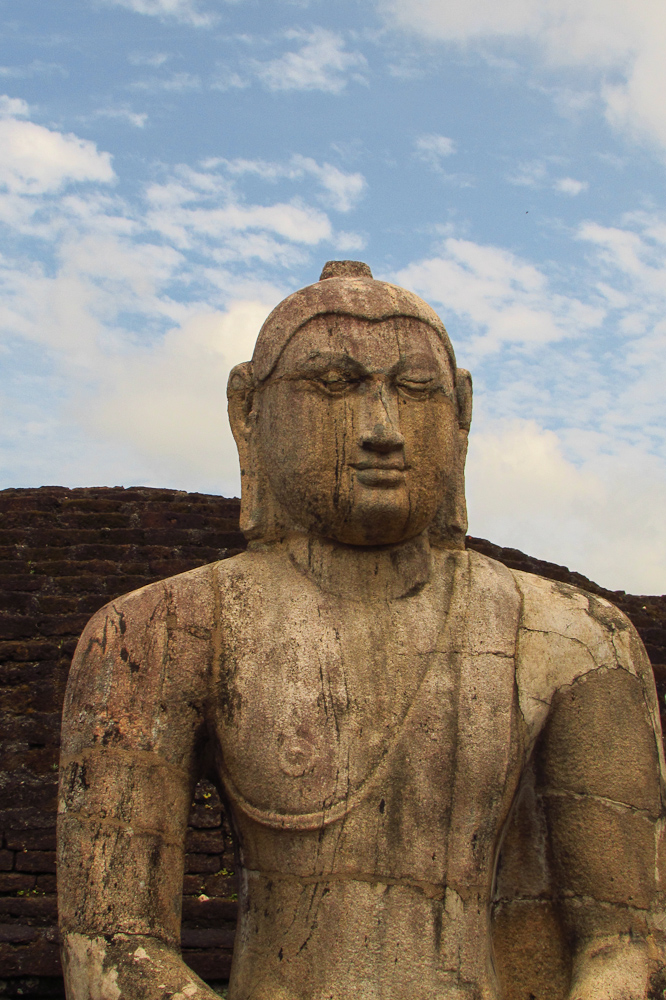 I was travelling with G Adventures and had a fantastic group! Our CEO Sumudu went above and beyond to show us some amazing places while we were there. This 14-day trip covered a lot of ground and I saw so much diversity throughout the country. 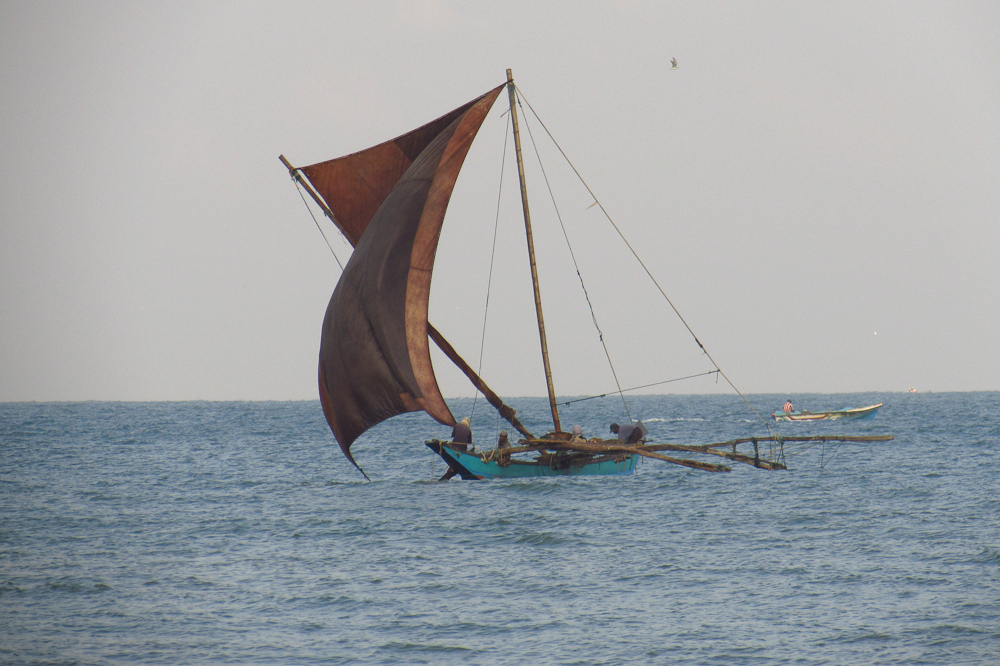 I arrived first thing in the morning to the fishing village of Negombo after a quick taxi ride from the Colombo airport. I dropped my bags at the hotel and headed straight to the water to dip my feet in the ocean and to watch the crazy fishing boats — a great way to start my trip! These thin boats have massive sails that shine copper in the sunlight and are beautiful to watch. Along the beach I also saw some of the happiest and healthiest stray dogs I have ever seen. They just ran along the beach playing and completely ignoring me and everyone else. 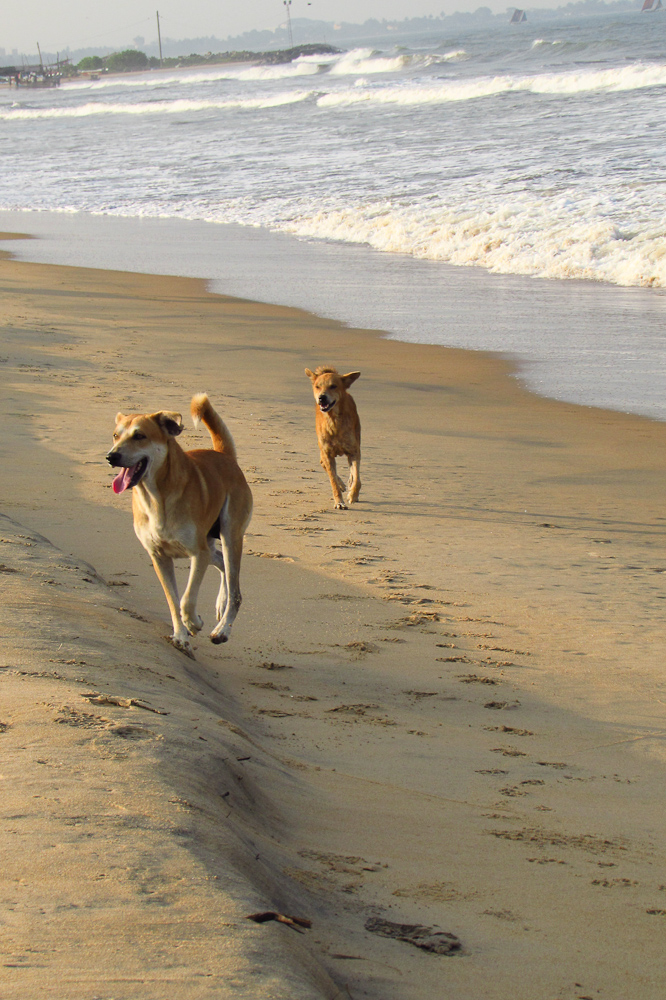 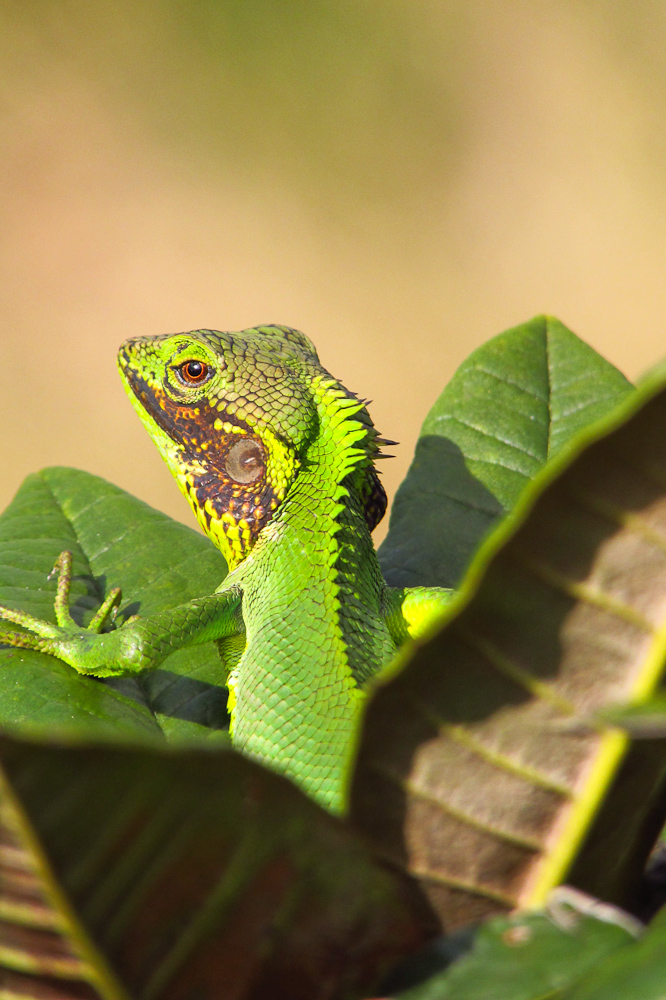 My tour met up on a Saturday, so our first day together we took small boats through the canals and marsh lands where we saw monitor lizards swimming and sunning themselves as well as a lot of species of birds. From here we headed to the fish market. I was surprised that this is one of the Christian areas of the country so the market was closed. This was fine since just beside the fish market there were fisherman drying their catches of the day on burlap on the beach. Salted fish is a big thing in Sri Lanka. 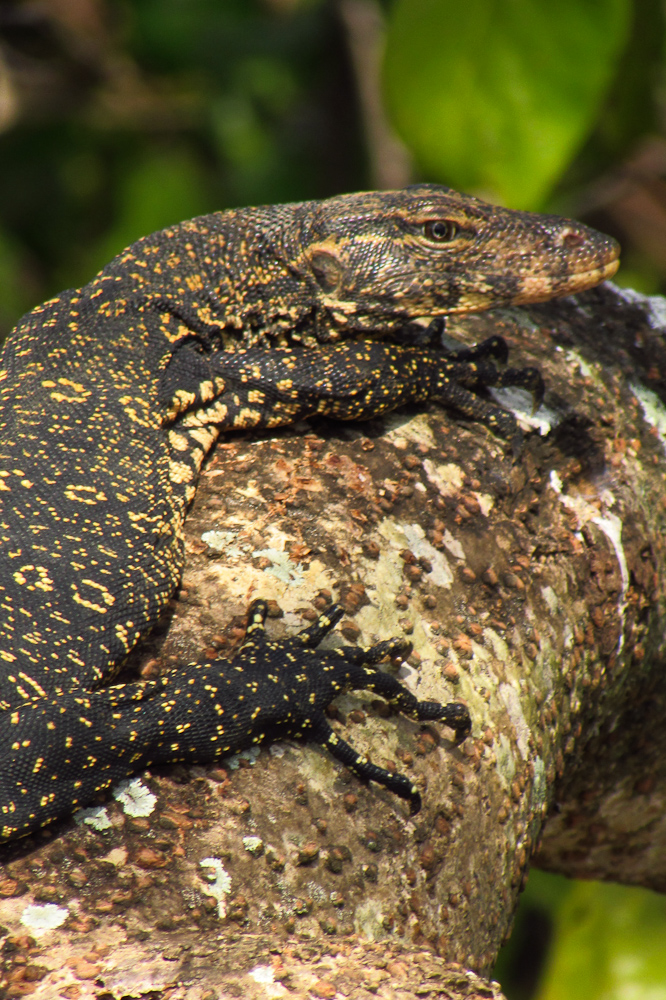 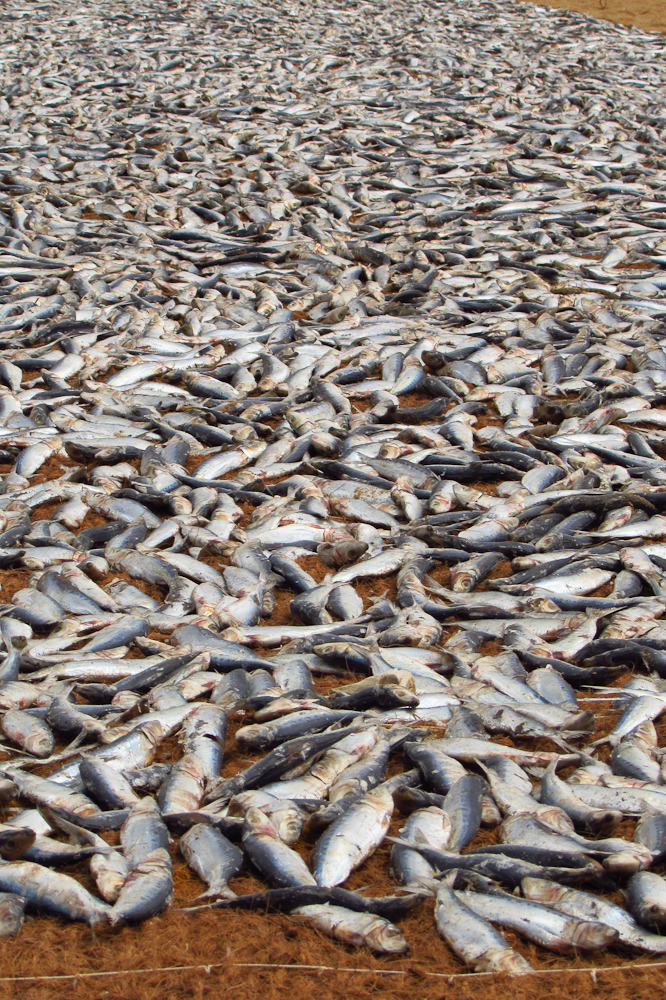 I’m just going to tell you the highlights list of this trip is going to be massive! There are many UNESCO sites throughout this trip and all of them are worth visiting. The Golden Cave Temple of Dambulla, and the 5th century Rock fortress of Sigiriya are both great to see. Sigiriya is a massive rock that is often used to promote the country. I didn’t get a great photo of it from a distance, but after climbing thousands of stairs I did enjoy the view and seeing the remains of the palace and monasteries. 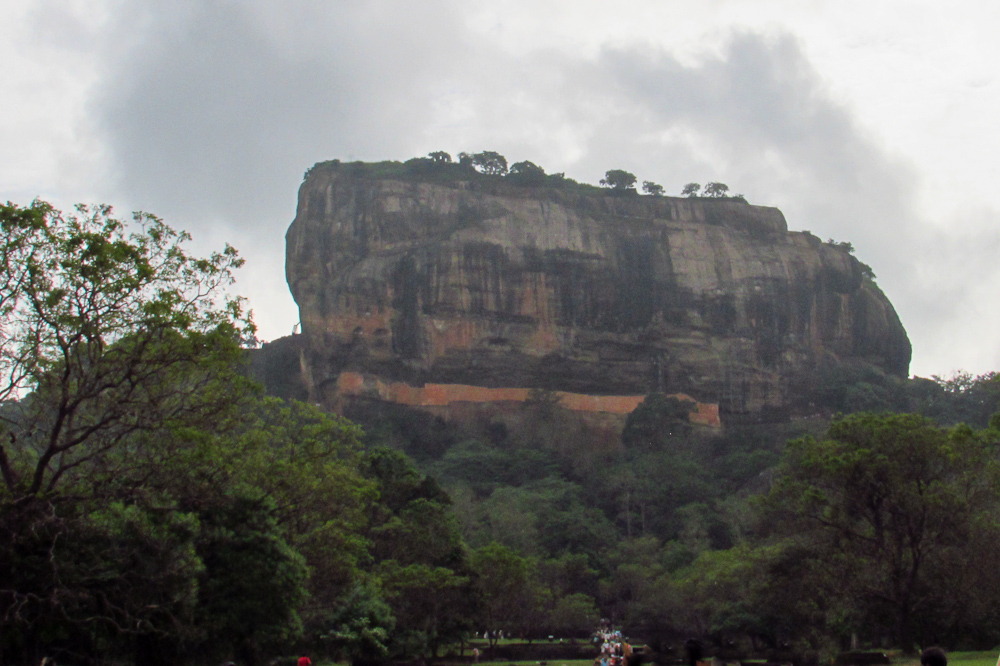 Kandy is a great city in which to walk around. There is a picturesque manmade lake in the centre of town that is perfect to navigate day or night. I wish I had more time here to wander. I headed to the botanical gardens which were great, but I would have loved an extra day here to explore more of the city. I did make it to the Tooth Temple where they keep a tooth from Buddha which is a proven relic. Buddhists from all over the world come here to pray and offer flowers. 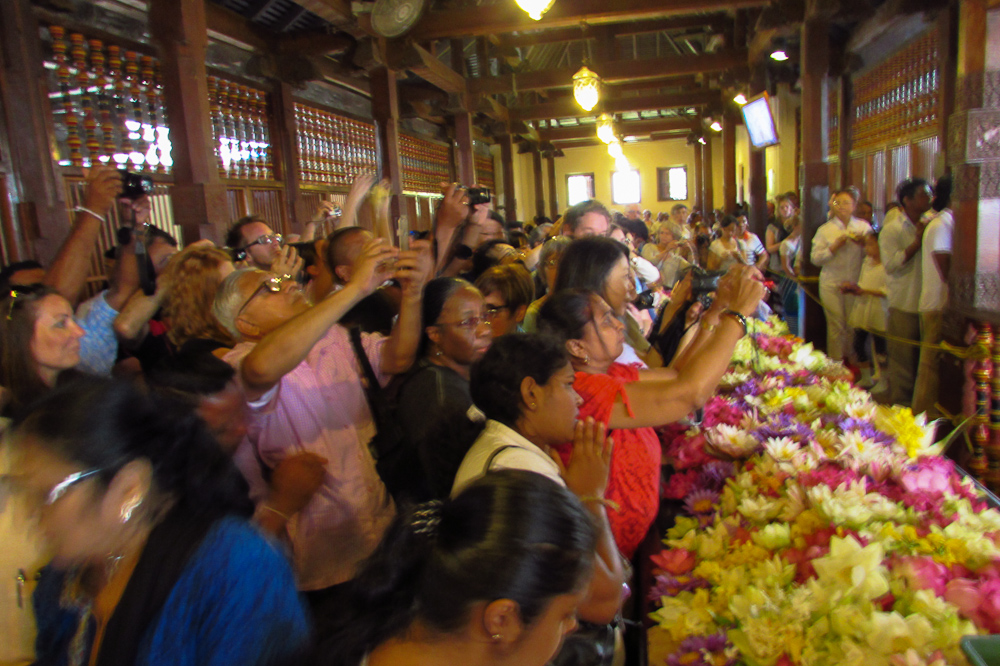 One of my absolute favourite parts of this trip was the train ride from Kandy to the tea plantations of Nuwara Eliya. The views along the way are spectacular! I spent most of the trip sitting at the open doors with my feet dangling out and just enjoying the scenery. It’s a 4-hour trip and worth it. The highlands are cooler and wetter than rest of the country. It was about 15C and the locals were all bundled up. I love tea and it was great to walk along the tea bushes and wander the processing factory. Sri Lanka is the land of Ceylon Tea so there was an opportunity to get dressed up for high tea at the Grand Hotel! 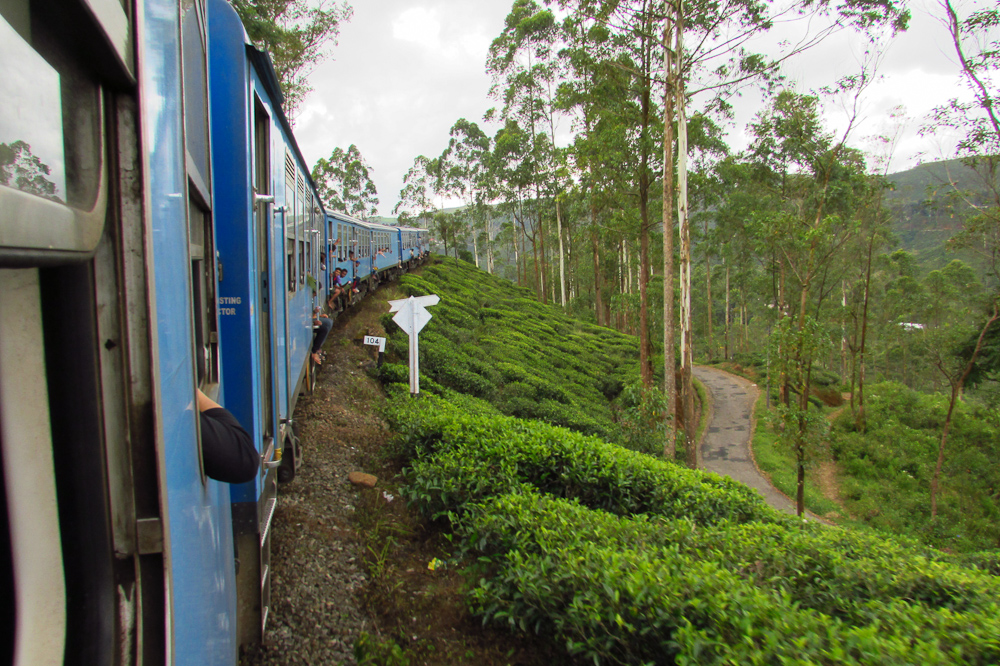 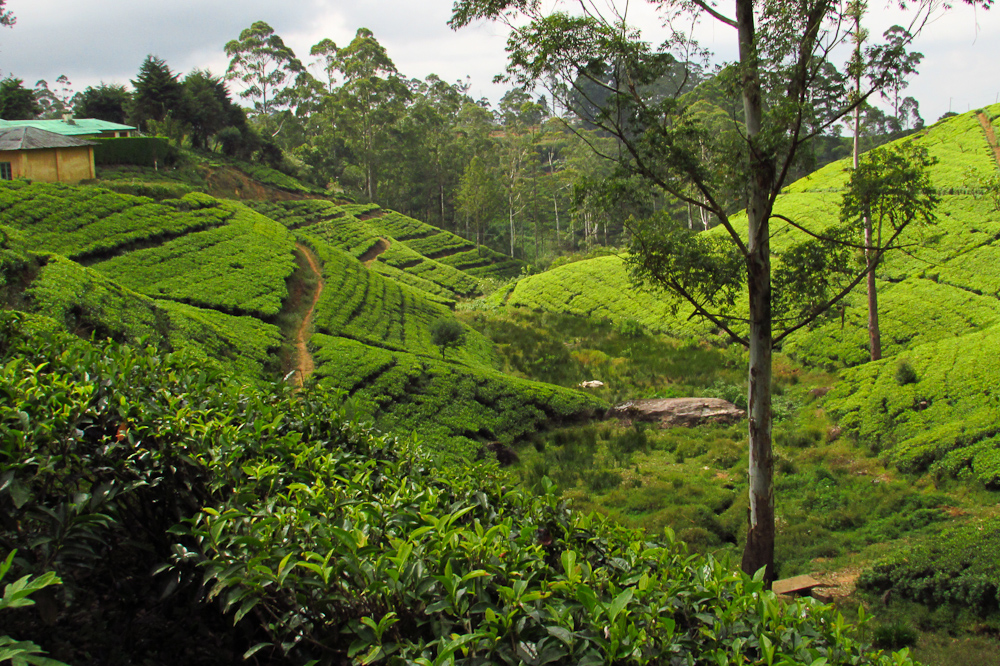 This is another area I would have liked to stay longer. The people were so friendly here, and there are some great walking trails. Our group hiked along a 9km trail in the Horton Plains that had some stunning views and beautiful flora and fauna along the way. I was amazed to find that they checked our day packs for plastic bags before we hiked in the National Park. The park, like everywhere else in the country was spotless! 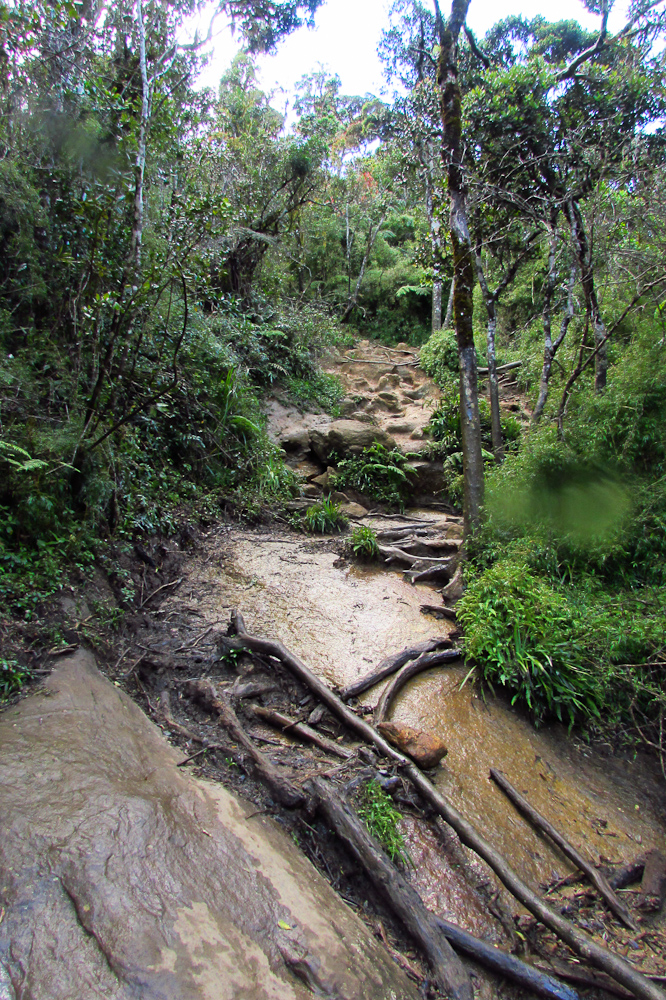 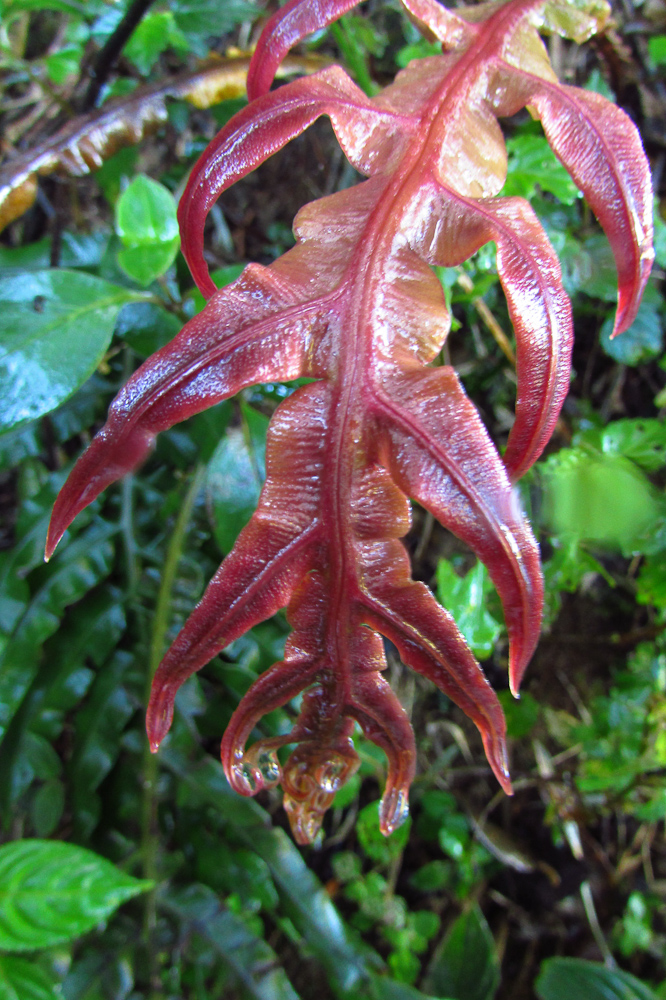 Our next stop was Uda Walawe reserve to see the wild elephants roaming. We stayed in an eco-lodge in tented rooms and had a great time walking through the woods to watch the elephants come to the water’s edge to drink. This area is beautiful and I loved swimming in the river steps away from my room. 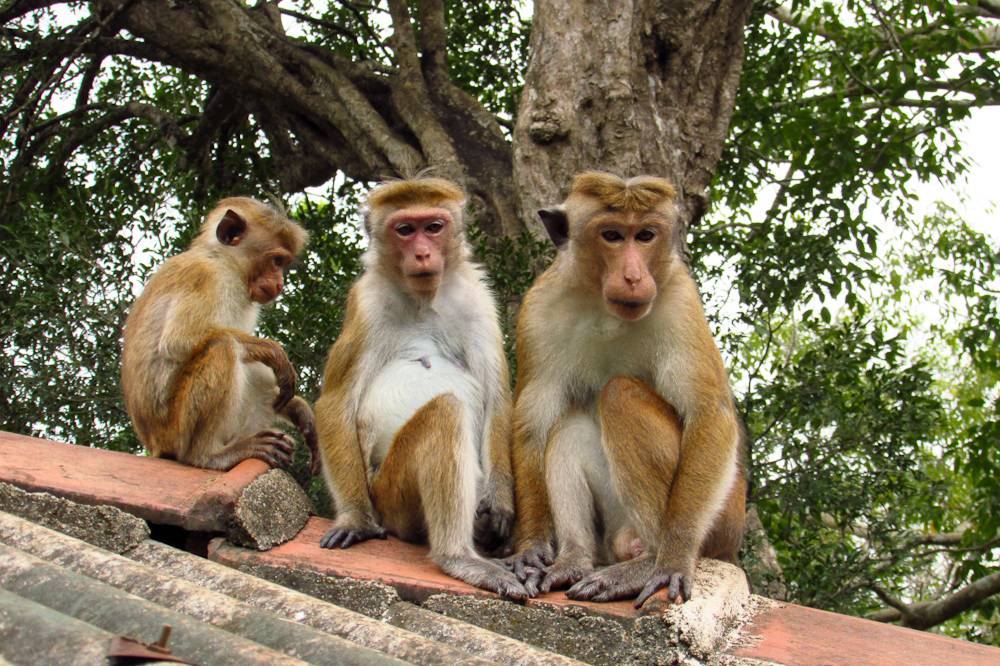 There’s an elephant orphanage in this area that we also went to. There are others in the country but this one takes in the orphaned babies and raises them until they are old enough to be released in small groups. They have released about 100 over the last few years and track them to make sure they are doing well. The other orphanages in the country are not as reputable.

Time for the beach! Hikkaduwa Beach is a great way to finish off a busy trip and to swim, walk the beach and play in the waves. At the end of the beach there is a hotel that has semi-wild turtles that come to take algae to eat from visitors. The hotel has staff on hand to supply the algae for visitors and locals alike, and to make sure that no one is harming the turtles. The turtles come and go as they please, and let me pet their shells and give them a scratch on their necks. This area of the beach is quite calm and is a perfect area for swimming away from the surfers. I also went on a whale watching expedition and saw blue whales! These are the largest mammals on the planet and spectacular to be able to see so close. 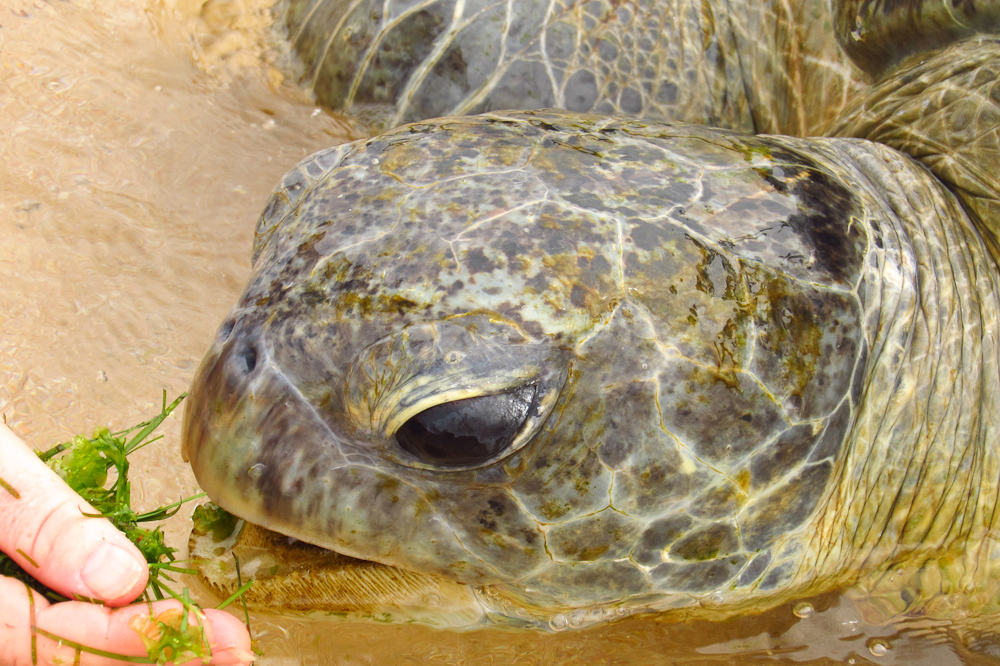 Close to the beach is the UNESCO town of Galle with its 16th century fort that the Portuguese built and later occupied by the Dutch. It’s a great place to spend the day wandering around, and watching all the people. The architecture of the town is so different from the other areas of the country. 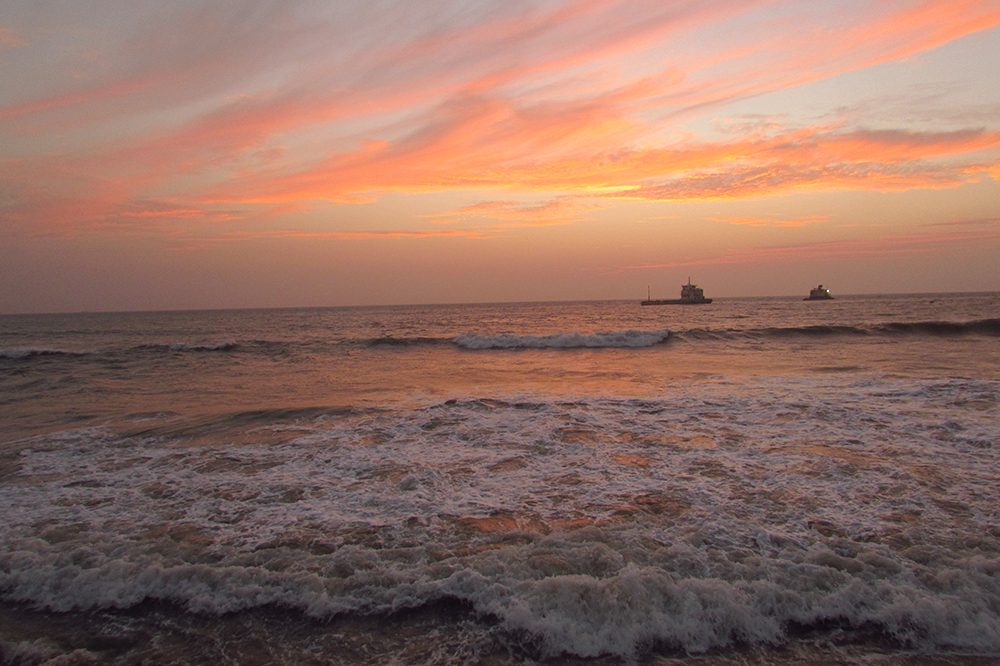 My partner and I left the group and spent an extra day by the beach with my sea turtle friends before heading to Colombo. If I had a few extra days it would have been great to do some hiking at Sinharaja Forest Reserve, but maybe next time. Our last two days were in Colombo were filled with visiting places all over the city. Most of my time I was in the Fort district visiting parks and museums, but my favourite part was Galle Face Green by the waterfront watching the sun go down. This is a festive area with families picnicking and lots of kites in the air. Our flight left just after midnight so it was great to spend the evening in the park before having dinner and heading to the airport. 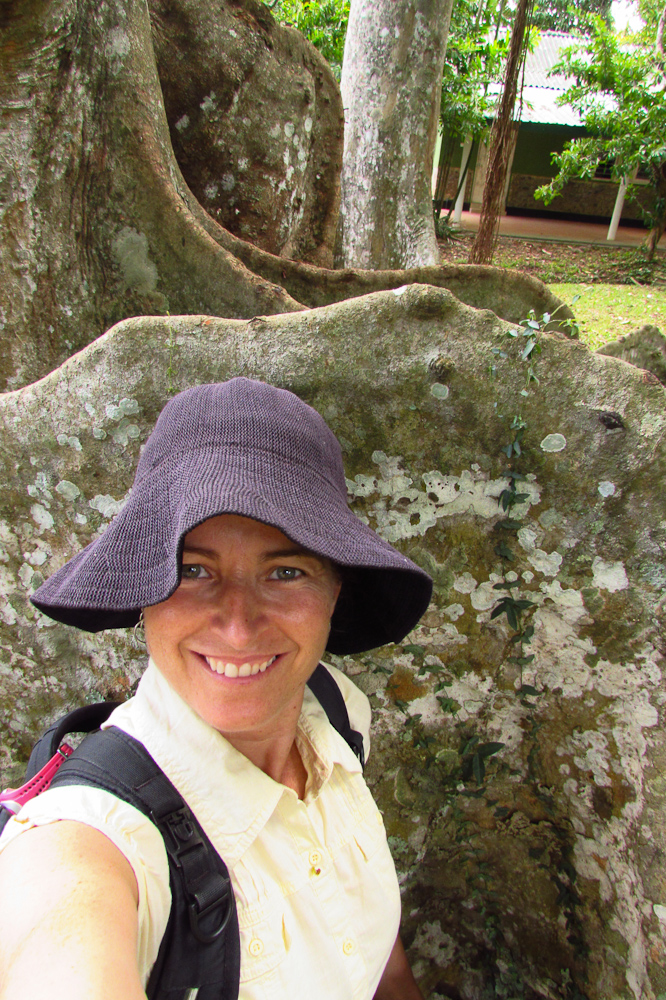 If you’re interested in heading to Sri Lanka I would love to help you plan your trip. It’s a fantastic country to visit, and I didn’t mention half of the temples, heritage sites and beautiful things that I experienced along the way. We were with a great group of people and would recommend Sri Lanka as a destination on its own or teamed up with a trip to India or Nepal.

You can contact me at SMckee@MeritTravel.com and I would love to help you with your next adventure!