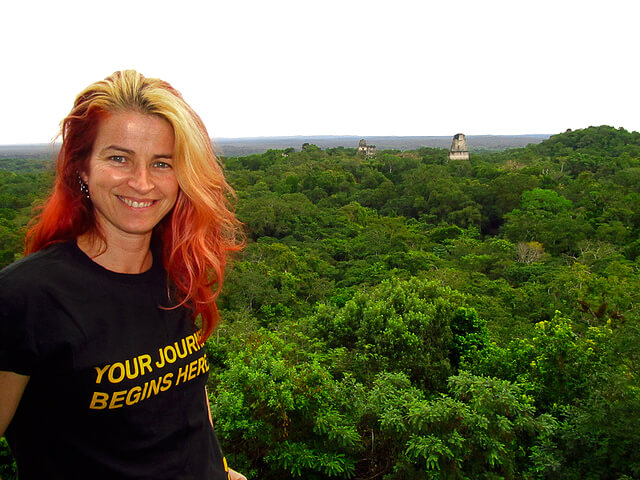 Giant tortoises, swimming reptiles, playful sea lions, giant cactus trees and the most beautiful coloured iguanas I have ever seen. I just got back from Galapagos in June and I loved it!

Most people heading to Galapagos choose to hop on a small cruise to see the islands. I decided to do things a bit differently and did a land-based itinerary with Intrepid. For me this was ideal because I could spend more time on the islands and do some exploring. There are three main inhabited islands that travelers are permitted to stay overnight and I had the pleasure of staying on two of them.

lsabela Island is the largest island in the Galapagos and the youngest. A chain of 5 volcanoes formed the island, and on a map it is shaped like a seahorse. We took a flight from Quito and a speedboat to get there. The speedboat takes between 2-3 hours depending on the weather, but well worth the journey. Isabela has tons of things to see and do.

My dream was to hike the active volcanoes and to see the land iguanas that live by the rim where they lay their eggs… Unfortunately the weather in the highlands had not been good for over a week and with very muddy trails and no visibility we were unable to do our 7-hour hike… not all was lost though since the island has so many other places to see and things to do to make up for it.

We went to a Ranch in the highlands where we saw giant tortoises wandering freely just outside of the national park. These tortoises are massive and really unbelievable to see up close. We were given much needed rubber boots to walk around and find them. I even got to squeeze into one of the tortoise shells they have on display. The drive to the highlands had ever-changing landscape that kept us wondering what was around the corner.

Another place that was totally fantastic was the tortoise sanctuary. They collect the eggs from different islands and protect the tortoises there for a few years before returning them to strengthen the population. Tortoises didn’t need protection for centuries, but when the ships that stopped in the area, they infested some of the islands with rats. These rats eat the eggs and young tortoises so this center is such an important place for the survival of the species.

One unexpected stop turned out to be a great one. We had extra time after our hike was cancelled so our guide Zambo brought us to a local coffee farmer. He had only planned on seeing if we were interested in getting fresh coffee, but after finding out we were interested in the coffee process we stayed for a couple of hours and made our own coffee. They make it all by hand there so we had a chance to pound the coffee beans to remove the outer shell before roasting it in a clay pot over an open fire. They were so friendly and served us coffee along with fresh fruit from the farm. It was so nice to meet some locals, see what their day was like and be welcome to their home.

Snorkeling in this area is filled with colourful fishes, and we were fortunate to see sea turtles and stingrays. Since the island is volcanic there really isn’t any coral, but the texture of the lava flows in the water making some amazing patterns.Heading out on a kayaking trip we got so close to a large group of Galapagos penguins, and blue-footed boobies. I couldn’t believe how close they let us get to them. Also later that day we saw a flock of blue-footed boobies swooping down and fishing in a fairly spectacular way.

I think my favourite place to spend time was on the beach at the lookout platform watching the marine iguana. They hatch on the beach in an area that has been blocked off to prevent people accidently stepping on the buried eggs. I went to see them every morning at breakfast and enjoyed walking the beach at night. Close to the port there is also a tiny island called Islote Tintoreras that is all jagged lava rocks and has a massive population of marine iguana. These guys were much larger than the ones I would see on the beach and looked like dinosaurs. I love iguana and lizards so it was great to get so close to them and not to scare them.

I was travelling with a small group of five others and our amazing guide Zambo who knew everything about the wildlife and the fauna in and out of the water. The weather was fantastic and the water at this time of year is so warm that none of my group needed a wet suit when we went swimming with sea turtles and colourful fish. Even with our busy schedule we still had a chance to hit the beach one day and play in the waves. Isabella is amazing! If you’re thinking of doing a cruise you can sometimes add on a side trip to Isabela to stay a few extra days.

Santa Cruz Island is more developed and has the largest population of all the islands. Puerto Ayora is where we stayed and were able to enjoy the town a bit with street long BBQ with such good fresh fish. We didn’t spend much time on Santa Cruz, but we did get to see the Darwin Centre with some beautiful tortoises and land iguanas from different islands.

One island that we went to see that is only for day trips is called Santa Fe and I am so happy we went there. They have massive cactus trees that make everything seem a bit surreal. We went out to the island on a really nice yacht and were dropped off at the beach by zodiac for our wet landing. There were a ton of sea lions all lined up waiting to great us. I love this island! No humans, and it has probably looked this was for thousands of years. They have a special species of Land Iguana there that we were fortunate enough to see on our walk on the island. I would have loved to spend hours walking and watching all the critters on this tiny island. We also went snorkeling in the cove and I was able to swim with a few sea turtles again.

What a great trip! I will definitely be back and try my luck with the volcanoes again. If you have ever dreamed of heading to Galapagos, but aren’t interested in sleeping on a boat this would be a great trip for you!

Maybe it’s time to start planning a trip to Galapagos? If you’re interested, I can give you a hand with land or small boat cruise options.