Peru on a Shoestring: Part 1

My friend and I went to Peru in September to celebrate our 21st ‘friend-iversary’. We couldn’t think of a better way to celebrate a lifetime of friendship than to climb up (and down) a mountain together (and maybe see some world renowned sites along the way).

We joined G Adventures’ Peru on a Shoestring in Lima on day one, and were promptly immersed into a whirlwind 15 day adventure down the coast and inland. I have been to Ecuador twice, and was expecting Peru to be very similar—but I found them to feel completely different despite sharing similar histories. 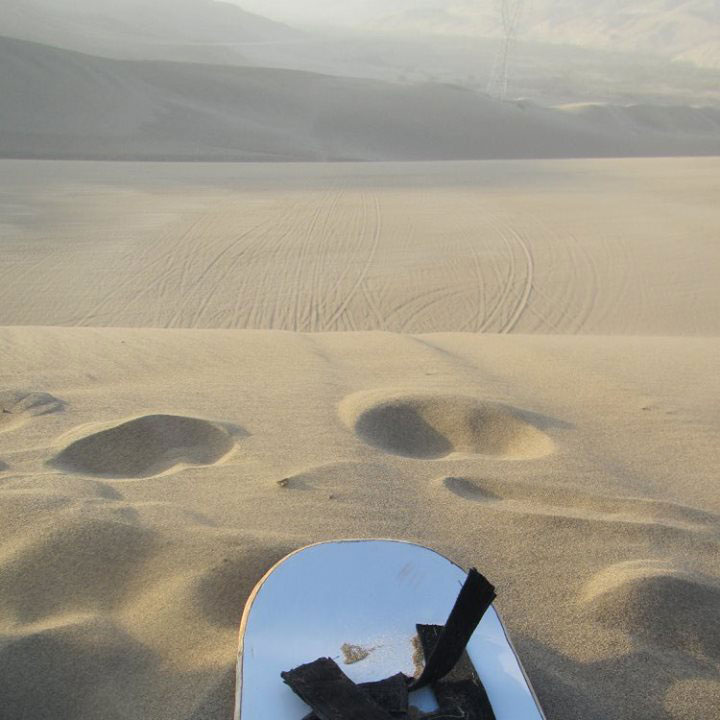 The landscape along the coast was not what I expected. I am used the coastal towns of the Indian Ocean; lush with greenery, swelteringly hot and teeming with mosquitos, but instead I was greeted with the arid Nazca desert. This isn’t any old desert. This is one filled with the much speculated geoglyphs aptly named “The Nazca Lines”. These mystical figures, made from shallow trenches in the desert sand are said to date back to 500BC and are best seen from tiny 6 seater planes that bank steeply (almost too steeply) from 15,000 feet up. The pilots then instruct you to look past the end of the wing, where after a little adjustment of the eyes, the lines appear seemingly out of nowhere. The variety of shapes that have been etched into the red soil is staggering; my favourite being The Astronaut. 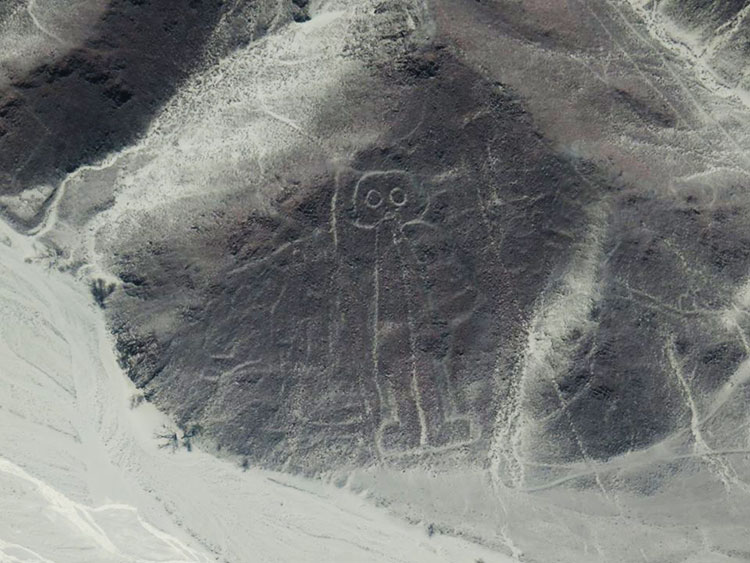 The small planes used to best view the Lines can feel a little precarious, so the overnight bus to Arequipa was almost welcomed—as welcomed as a 10 hour overnight bus can be. The buses in Peru are surprisingly comfortable; as I found out on my three 10+ hour bus rides. Arequipa is a beautiful city that is overlooked by snowcapped mountains. It is perfectly suited for exploration on foot and offered a ton of picturesque photo ops. It also offers a great jumping off point for Chivay and the famous Colca Canyon. 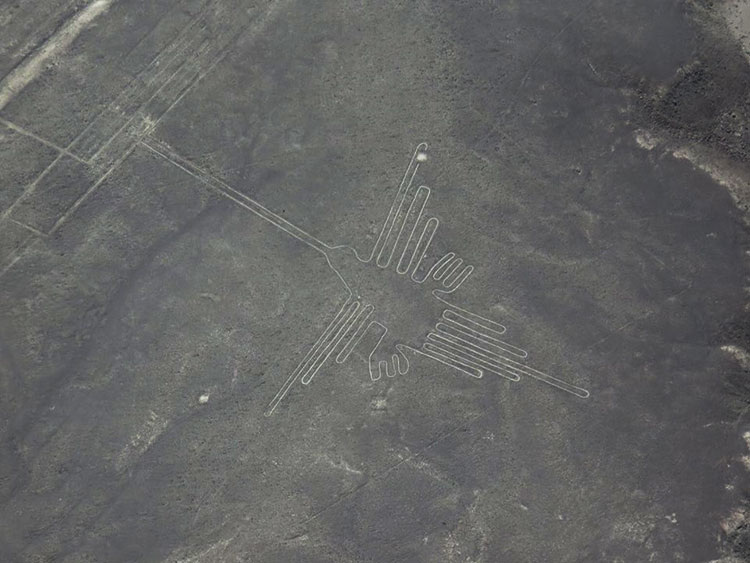 Andean Condors are some of the biggest birds in the world. Their wingspan is second only to some species of Albatross (if I remember correctly). Condors are actually very unattractive carrion eaters, but look entirely majestic in the air. They glide effortlessly on the thermals and almost never flap their wings. The Colca Canyon is one of the best places to observe these birds in their natural habitat. The hike to the lookout also serves as sneak peak of what’s to come. Even the slightest incline feels laborious at these heights: something I was going to become even more familiar with as the trip went on. 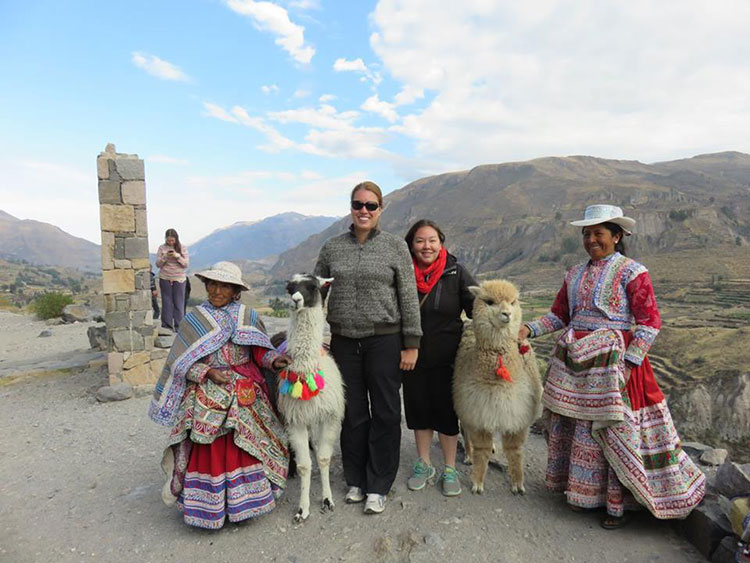 One can only watch birds glide for so long, as there are many adventures in Peru to be had. Cusco was once the centre of the Incan Empire, and is now the centre of adventure sports which is exactly what the majority of my group had in mind. The infamous Urubamba River and its rapids are a short drive from the centre of town. We spent the better part of the day navigating (somewhat successfully) down the river through class 2-3+ rapids. I’ve never been whitewater rafting before—it. was. so. much. fun. We were greeted with a homemade lunch at the end of the run, which always helps. 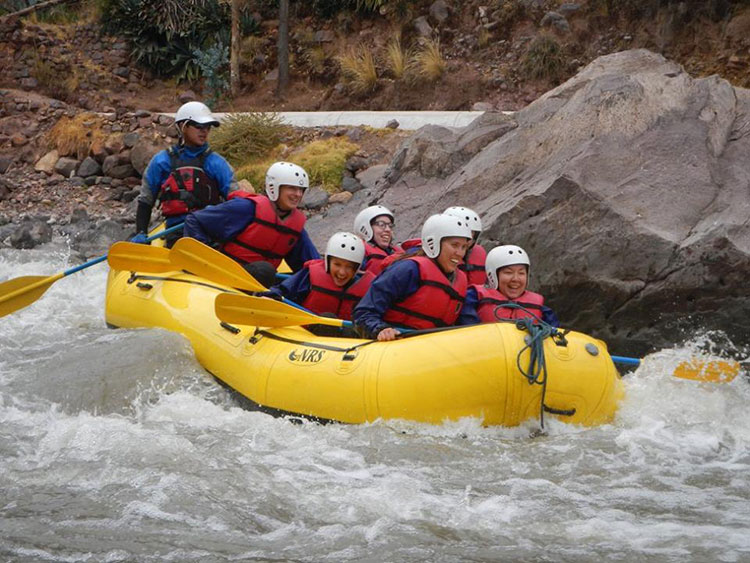 You can’t really beat a homemade meal, and we were lucky enough to experience two days’ worth in Ccaccaccollo. One of the highlights of our trip was spending a night with the “mamas” of Ccaccaccollo, which also happens to be the same town in which the Planeterra Weaving Co-op operates. We spent a day, eating, dressing up and dancing with the local ladies and children. Many of the men from this town are porters for the various hikes in this region, so they didn’t get to join in our fun. Dressing up in traditional garb was also on the game plan. I am not much of a ‘joiner’ but was pressured into it by my very kind, but very persistent mama. I ended up being grateful for my outfit as the evening got quite brisk and the multiple woolen layers helps stave off the chill. 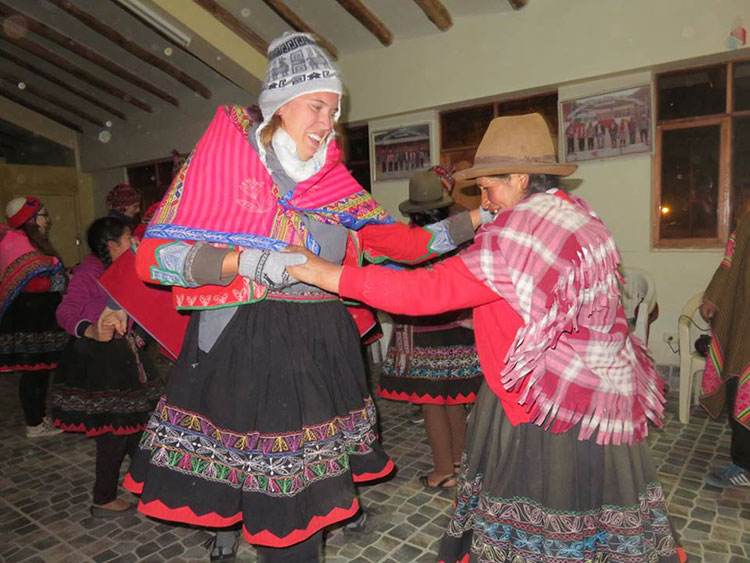 Turns out, it is chilly in the mornings when you are in the Andes, as well. An early wake up call, and some breakfast popcorn prepped us for some serious shopping. The Planeterra Weaving Co-op has a marketplace in Ccaccaccollo to satisfy any shoppers’ needs. I was so disappointed to have already gotten all of the wooly accessories I’d need for my trek, but did manage to spend a few Soles without much trouble. We could have easily spent the whole day perusing the various woven and knitted items, but had to leave enough time in the day to explore the Sacred Valley and eat at Parwa Restaurant. 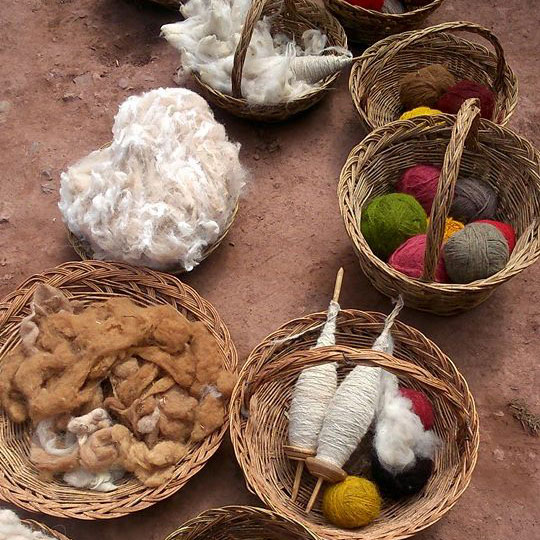 The ruins of Pisac and Ollantaytambo are some of the most beautiful I have seen. The stones used to construct all the structures and terraces are immaculately carved. It was nice to be able to experience some ruins as the Lares trek only has one site right at the end (where the Inca Trail passes numerous sites). We spent the morning into the early afternoon wandering around Pisac’s various temples and along stunning trails overlooking those temples. Our guide led us past the throngs of tourists to the backside of the mountain where we had a set of ruins all to ourselves. 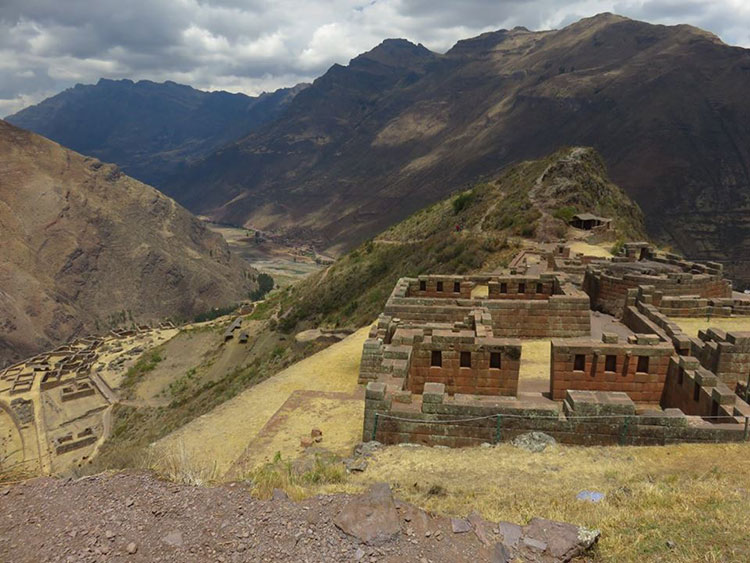 Breakfast popcorn is delicious, but doesn’t do much to keep you satiated throughout the day, so by the time we arrived at Parwa Restaurant we were ravenous—a good thing, since we were about to be fed a ton of delicious locally grown food. The restaurant had a prix fixe menu, and everything is served family style. I am a vegetarian, and they were able to cater to my needs wonderfully! We were fed several starters, a giant main and dainty little desserts all washed down with fresh juice and strong coffee. This community run, Planeterra backed restaurant had some of the best food I had eaten in Peru, which is saying a lot since Peru boasts the culinary capital of South America—Lima. 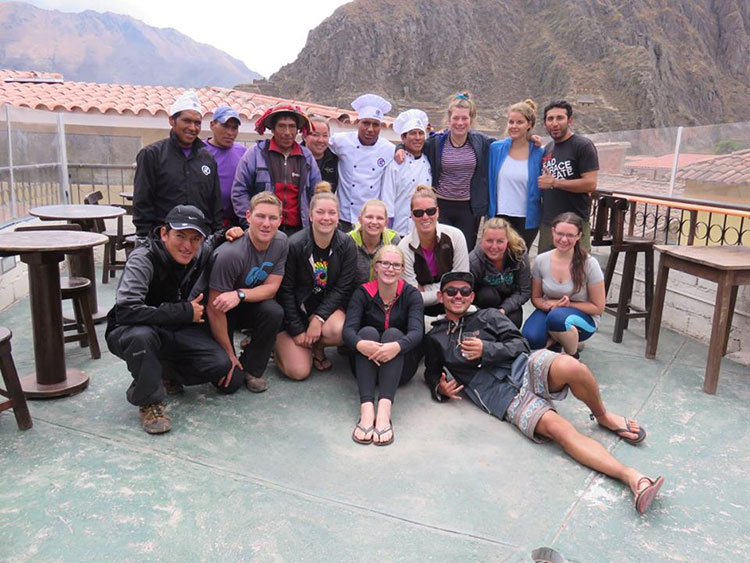 Once we were all fueled up, we headed to the adorable town of Ollantaytambo which sits adjacent to ruins of the same name. The complex was huge, and just as impressive as Pisac, but much more crowded. We saw some lovely functioning fountains, and took pictures with free roaming llamas, so I would say it was an afternoon well spent.
Most of us didn’t want to overexert ourselves before starting our trek the next day, so we only climbed up the mountain once to properly take in the stunning vistas. Others were a little more energetic and climbed back up to see the ancient ruins from a different vantage point; those same people would go on to race the guides up the Inca Trail. 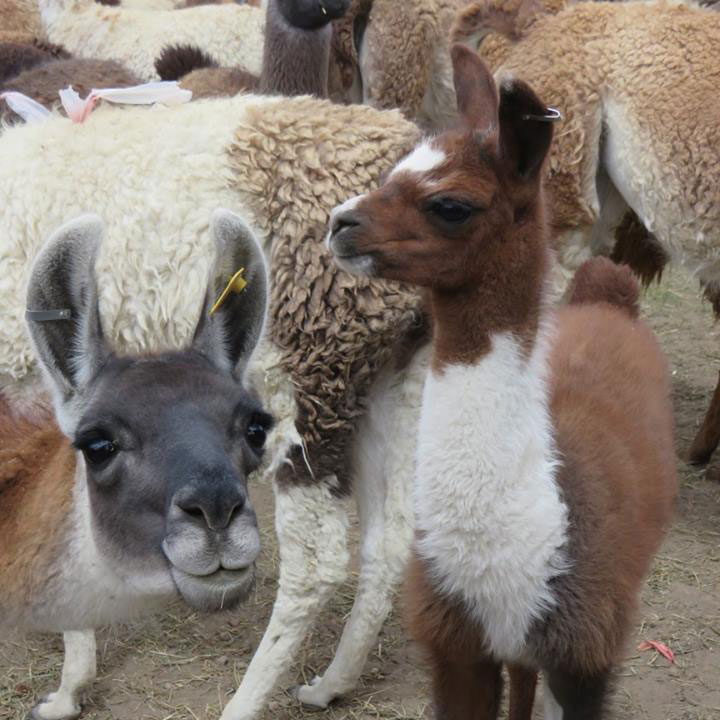 Our group was split up into two groups the following day. Some would go on to do the Inca Trail and the rest of us would start the Lares Trek. We drove for a few hours up winding roads to the starting point of the Lares Trek. There isn’t actually one ‘Lares Trek’, rather, the Lares Valley has a number of treks that lead you up through the mountains, past icy blue lagoons and through tropical feeling forests. 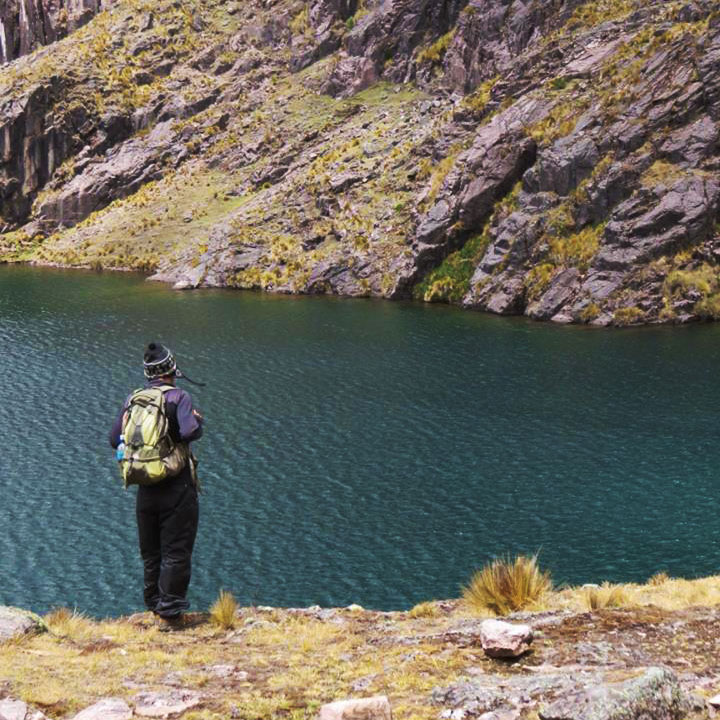