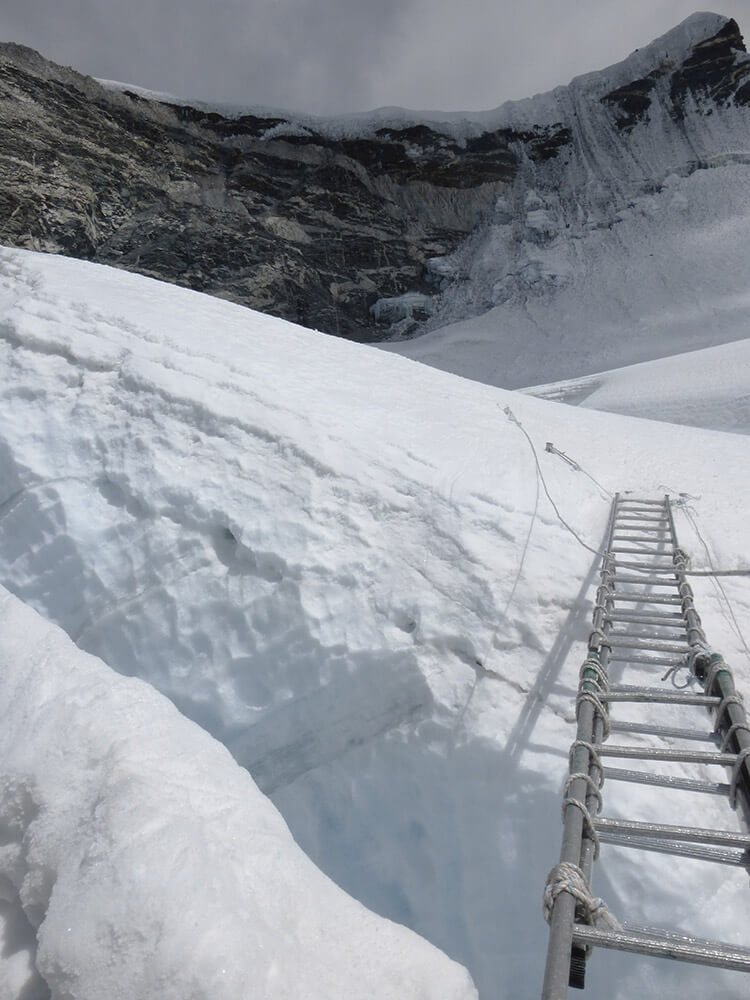 Continued on from Part 1…

As Island Peak is below 7000m, it is considered a trekking peak, however it was no walk in the park. Fixed ropes, ladders and a good level of fitness was most definitely needed. Summit day was the hardest of them all. We were up a little after midnight to try and eat breakfast and set off walking by 1am. We trekked for 5 hours up loose rocks and scree from 5090m to 5900m just to get to crampon point for sunrise. Not only was it nice to start to feel the warmth of the day coming through, the dawn also brought about spectacular views.

Island Peak is now being used a lot as preparation for Everest climbers as the ice wall is similar to the Khumbu. But without as many crevasses – it’s not as dangerous. At this point we ran into two American climbers camped out for a few days to acclimatise and practice their skills before attempting to summit this year –  it was certainly a beautiful spot to spend a few days. 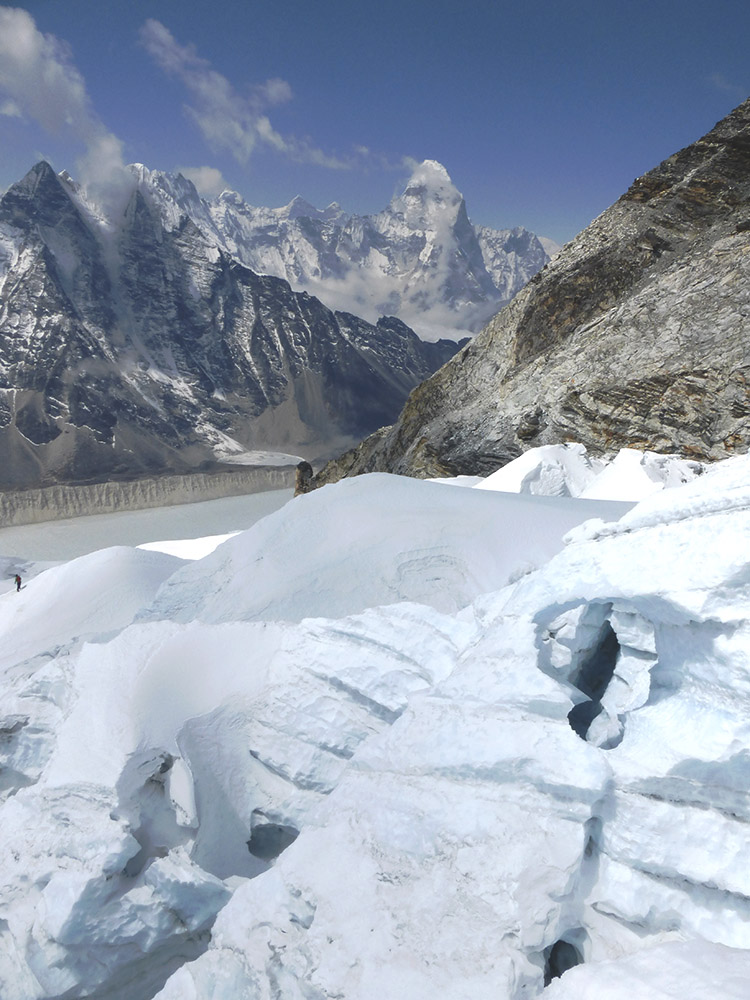 My Favourite Part of the Climb

As much as it felt like a full day had already been walked, now was time to change the crampons and get onto the ice. Initially, we should have been relying on crampons and ice axes to get us up the first slope, but one of the guys I was climbing with fell twice (lucky for the ropes attaching us that kept him from falling too far), which meant we were on the fixed rope and jumars earlier than anticipated.

After getting up the first icy hill, it was gentle slopes before tackling the crevasses. Ladders had already been set up with safety ropes attached and I was glad for the training at base camp to know where to position my crampons. Initially very nerve racking, it quickly became my favourite part on the mountain. It’s not often you get to stand in the middle of a crevasse and be able to look down into the abyss below. 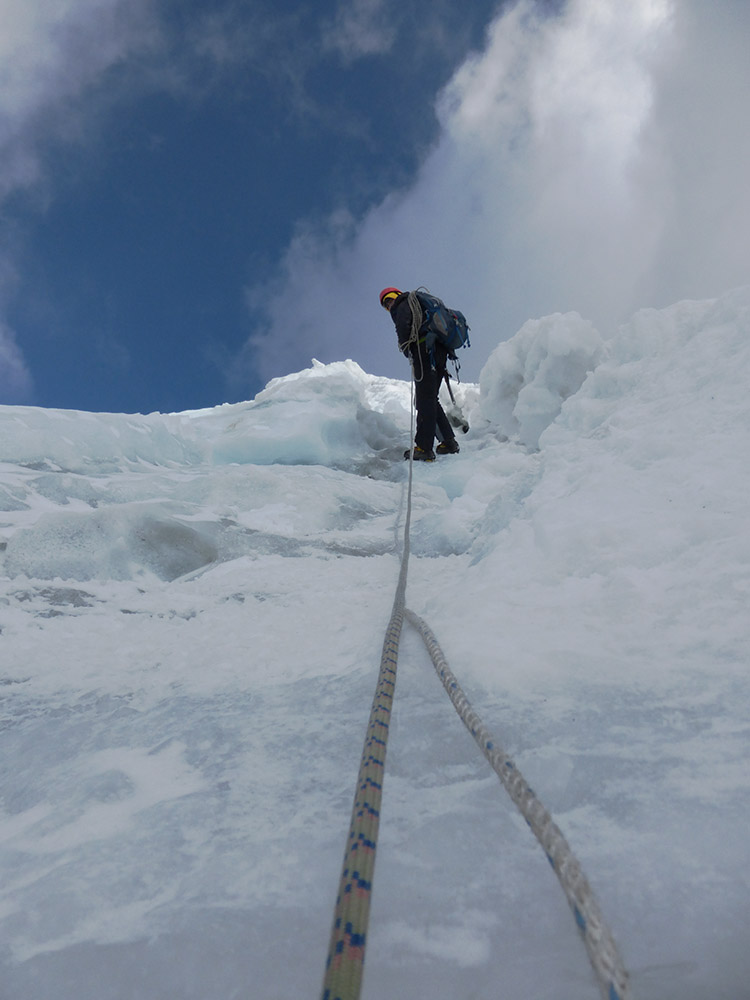 From here it was a nice relatively flat section before taking on the ice wall. What I thought the ice wall would be certainly turned out to be very different. I thought I would be climbing a near vertical fairly flat wall of ice (which it used to be) but now it is a quite a jagged mess of ice, with large steps, holes and vertical sections. After over eight hours of hiking and climbing the last 150 vertical meters up the ice wall, it proved to be too much for me.

A Well-Timed Change of Mind

As hard as it was to make the decision to turn around by the time I got back to crampon point, I definitely knew that I had made the right decision. And I even got brought down the mountain by a famous Sherpa, who’s known to be super speedy even by Sherpa standards and was one the Sherpa’s used in the movie Everest. The wind was picking up, the weather was coming in again and my knees were starting to give out. More than 13 hours later I was finally back at base camp, with a hot drink in my hands and very happy to be climbing into my tent for a sleep. 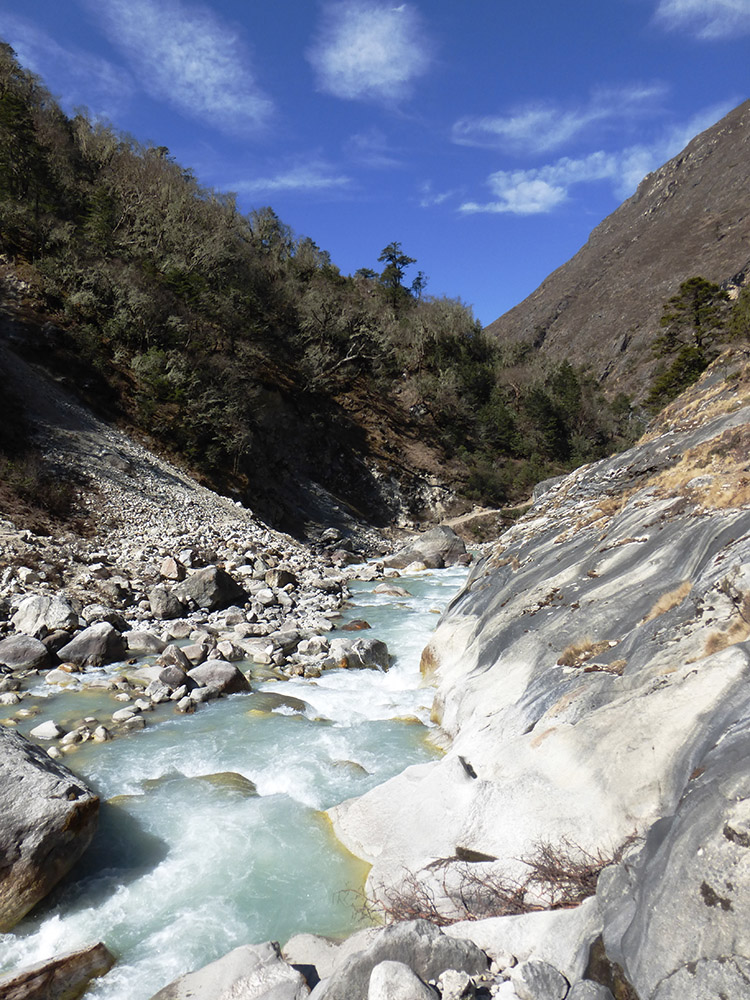 Considering this was my first ever attempt at mountaineering, I’d say getting above 6000m, using fixed rope, crampons, ice axes, jumar (ascenders) and ladders to get over some of the larger crevasses is a pretty good effort. I’m sure I’ll end up trying something like this again (I already have my sights set on Mera Peak, whose ice walls are substantially shorter), but for now I will stick with regular hiking where my boots, pole and micro-spikes in the winter are all I need.

The walk back to Lukla was undoubtedly a lot quicker and easier now that I was well and truly acclimatised, and heading mostly downhill certainly helps. It was nice to get into the lower altitude and see how the crops and rhododendrons had grown in the weeks I had been above the treeline, along with the birds and butterflies that were now active. Spring was now certainly in full swing.

The Time to Visit Nepal

Although it is currently the high season for trekking, the tourism numbers are still very low, so it is a great time to visit Nepal. The people are happy, friendly, welcoming and ready to show you what their country has to offer. Nepal is a country I will be sure to visit again and wished I’d had the time to spend longer exploring the different valleys and treks that are in abundance. 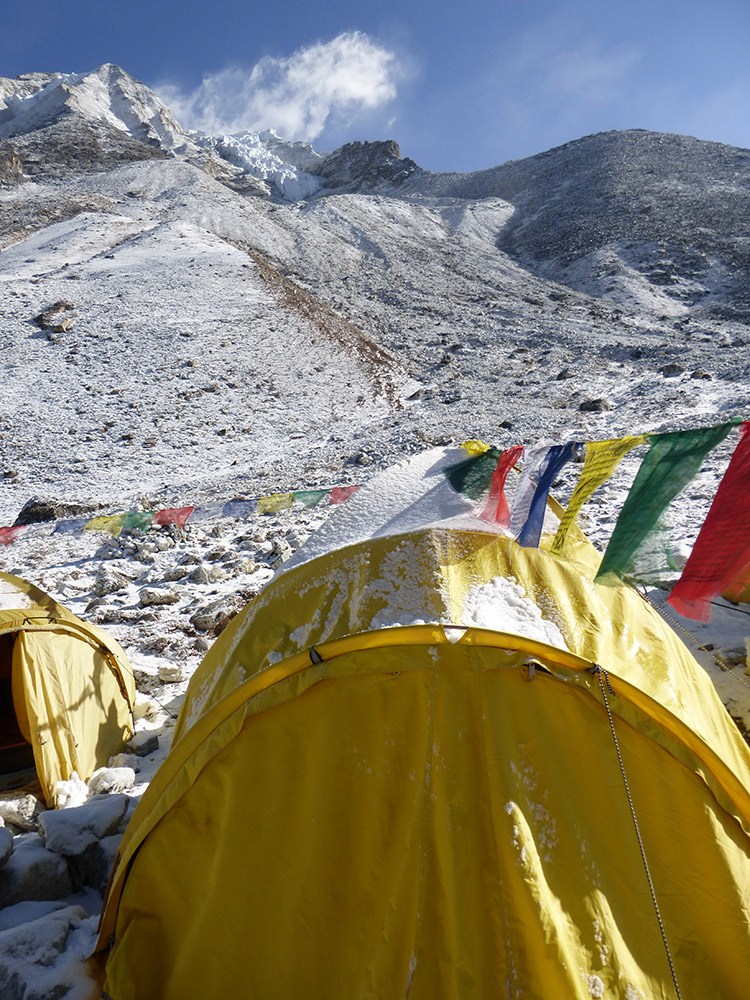