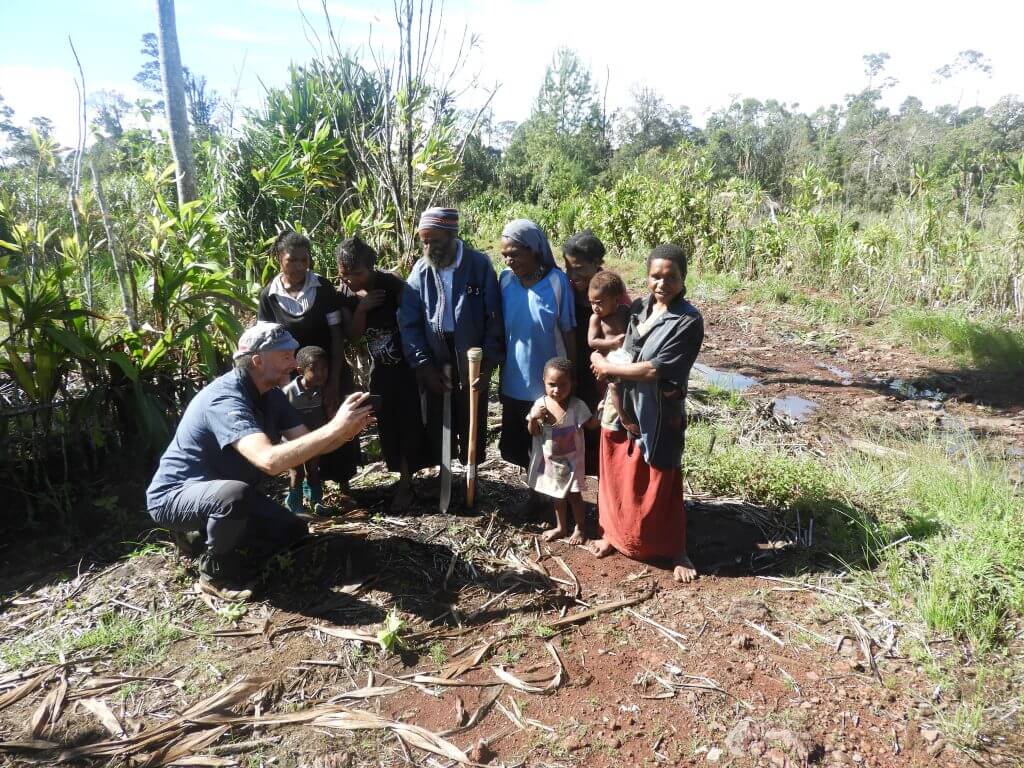 Today marked the day that we were to start trekking into the unknown and down the southern side of the mountain. There was quite a lot of waiting at times while people went ahead to look over the ridges and down the spurs to find the best route. The way that we were originally hoping to go looked like it turned into a massive gorge after inspecting it on the way to the summit.

Although the morning had starting out beautifully the clouds came in a hurry with torrential rain. The rain was so heavy that everyone stopped and huddled under a tarp for about 30 mins while we waited for the rain to subside. As the morning was so wet we found a spot to camp and to continue the following day.

It was remarkable to see how quickly the men started a fire, given how wet everything was and to watch them build another shelter again and appear from the bushes with hats they had made.

What was expected to be a fairly leisurely day, turned into an epic day of trekking. Although the morning started off fairly easily through the alpine grass, we soon headed into virgin jungle. We had anticipated spending the night at the tree line, however as we had reached the trees by 11am we thought it best to push on. It’s amazing how quickly the alpine grasses became the rainforest.

This forest was unlike any I have seen before and it was obvious that no-one had walked through here. It felt very mystical with every colour green imaginable; it all appeared extremely vibrant.

Nature had a Heartbeat

There was a feeling that the area was alive. We were walking on a false floor of decaying vegetation with a very soft and spongy feel; it was strange not ever knowing when the floor would give way underfoot. It was fairly slow going trying not to trip over the vines and tree roots. Several of our porters were leading the way with their bush knives trying to break a path through the vegetation.

One of the men was a little ambitious with the branches he was cutting and managed to snap his machete in half. After coming across a small clearing near a creek that we had hoped to camp, we pushed on due to the number of trees and risk of falling branches in the night. The search for clear, flat ground continued. The rainforest quickly turned into a bamboo forest where we had to cut a tunnel through to be able to continue. The jungle had zapped all my energy, and it took all my concentration to be able to continue walking and not trip over.

Thankfully the bamboo didn’t last for too long before giving way to head high grasslands on relatively flat ground, which made walking a little easier, even if the grass scratched any exposed skin. Luckily just before nightfall we came across an old logging road, complete with a leftover bulldozer, that provided flat ground and enough space for us to make camp for the night.

At Night the Rains Came

During the night, I encountered some of the heaviest rain I have ever experienced! It was so heavy it sounded like I was sleeping under a waterfall as raindrops couldn’t be heard and in a volume heavy enough to cause a tent wall to fall in on a couple of people’s heads. Luckily, I stayed pretty dry aside from a few drops on my head, my boots were not so lucky. Thankfully there was only one more day of trekking so having wet boots didn’t cause too many foot problems.

Based on GPS calculations, the relatively flat and open terrain, we knew that we had about 5 km to go before hitting the road and making our way back to Mt Hagen. We continued down the logging road, which was fairly flat and wide making walking pretty easy considering where we had come from. We stumbled across a few more trucks and tractors that had been left behind from the logging days and a rickety bridge that was barely still standing.

We had the feeling that we were getting close, when we ran into 4 men from the local village who were cutting wood to sell. They informed us that the road was only about a 15 min walk away. Before we knew it, the start of the village appeared and slowly the people emerged from their houses. This village (Tiewe?) was certainly a lot more timid compared to where we began. The children seemed especially timid as they either looked very unsure or hid behind their mothers. 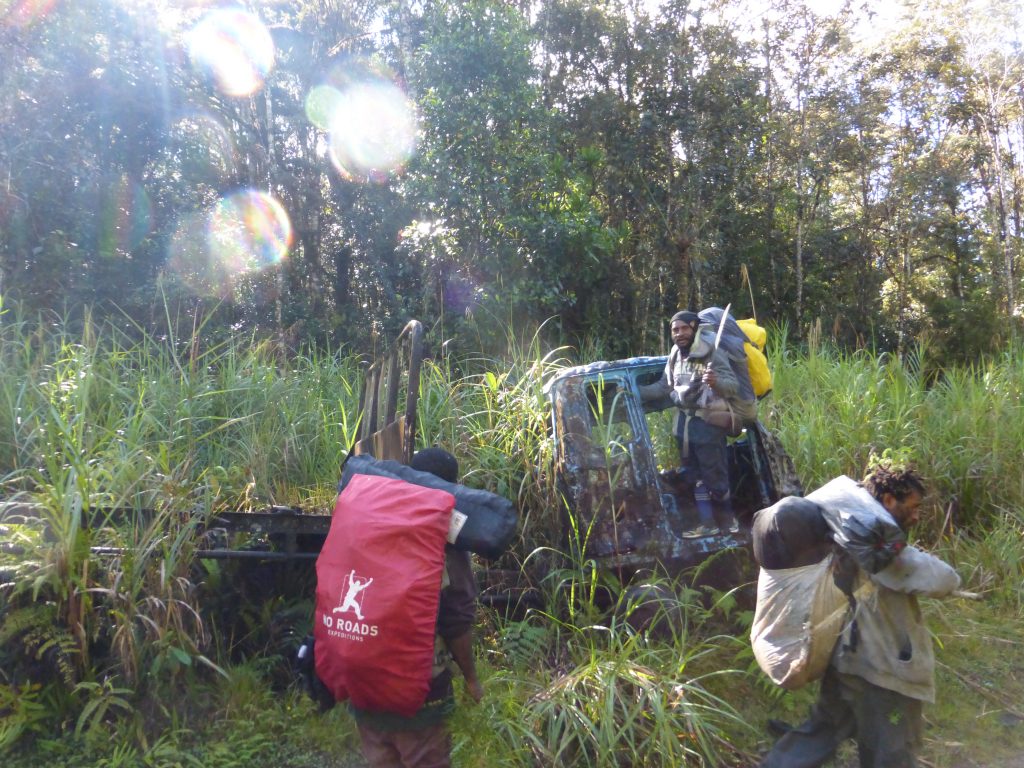 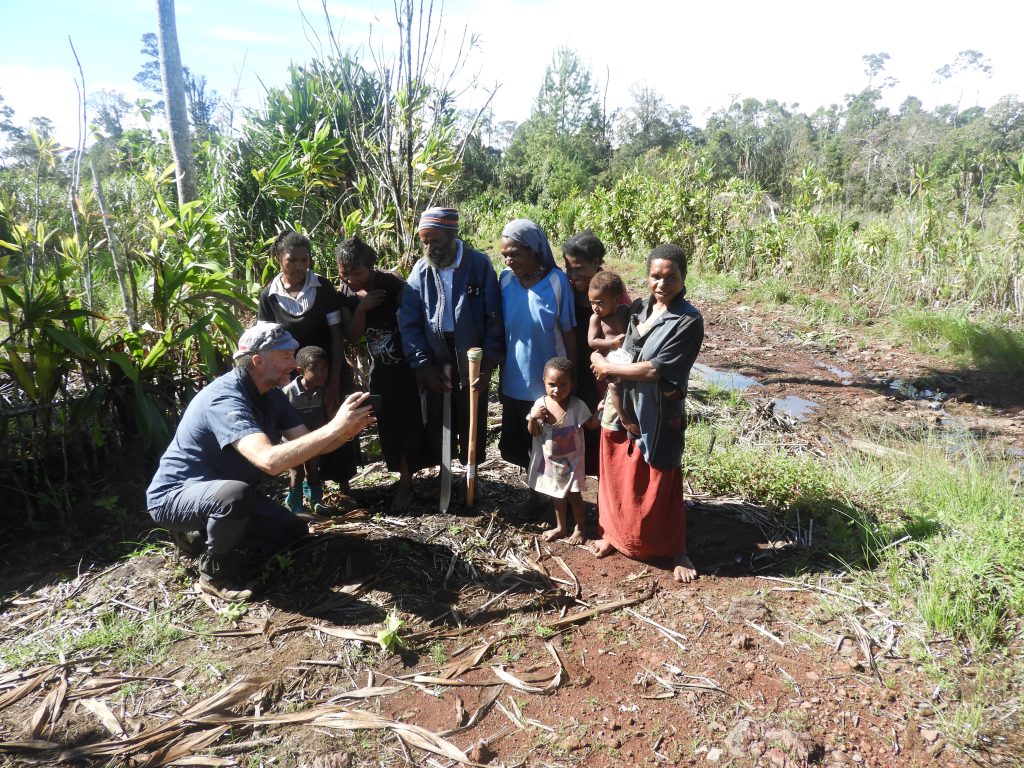 We met the village elder, who doesn’t know how old he is, but we estimate in his sixties as he remembers when everyone wore traditional clothing made out of the bush rather than modern clothing. He remarked through translation (the village speaks the same language as Malke where we began) that we were the first tourists he has ever seen walk into his village from the mountain. It was exciting to hear that what we had embarked upon as a first traverse was confirmed as we finished. 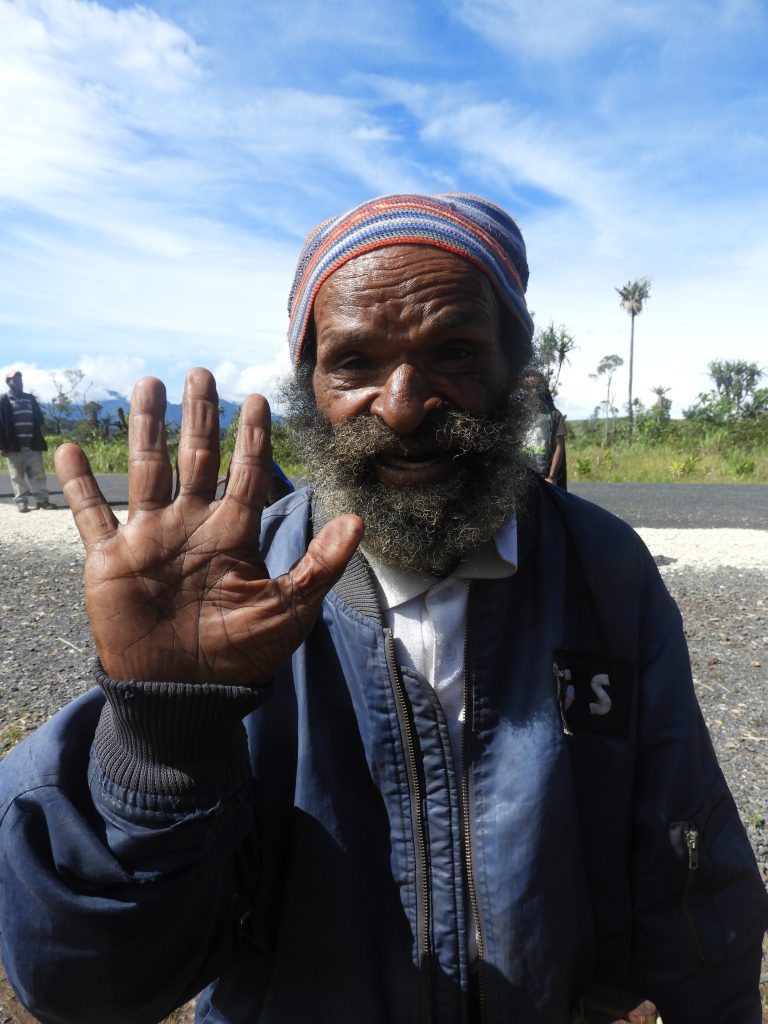 Joy Amongst the Porters

All of our porters ran onto the road jumping around almost like children, taking selfies and celebrating that we had descended Mt Giluwe safely, with time to spare as we hadn’t backtracked too much. It was beautiful to see such raw joy and happiness that almost seems to have been lost in the western world. As we finished a day earlier than anticipated we were taken to spend the night at Ben’s place on the outskirts of Mt Hagen, where all the Hagen Porters we had hired live. Ben, who provided us with the porters from Hagen, owns an area on the outskirts of Mt Hagen, that is set up in a village style setting, with open spaces and homes made of traditional materials.

Although Ben was not around, we met plenty of his family. This spontaneous gesture for us to be able to stay on their land was a wonderful way to finish and reinforced the hospitality and friendliness that we had experienced throughout the trek. 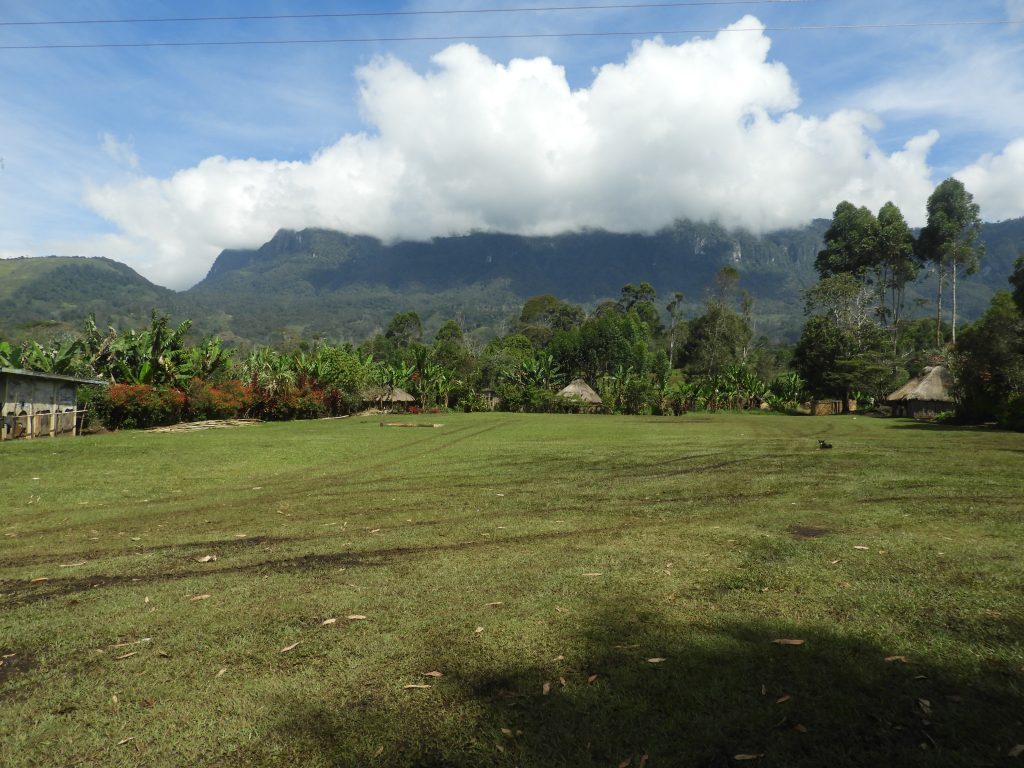 After a leisurely morning relaxing with the village it was time to say our farewells to the boys of Malke and Hagen and show our appreciation for all the hard work they had put in to help us achieve our goal of completing the first ever traverse of Mt Giluwe. Before heading to the airport we went to the local school to meet the kids and have some fun flying a drone around them. I loved seeing the different reactions, from absolute fascination to fear.

Unfortunately, when we arrived at the airport for our flight to Port Moresby we were informed that it had been cancelled. We were able to check in for our later flight and drop our luggage off. When leaving the airport, we followed one of the local politicians out through the gates. As it was election time in the country there were a lot of supporters waiting for him and we had to walk through a group of women dressed in traditional clothing who were singing and showing their support for him.

Funnily enough we ended up in the national newspaper the next morning as part of the election news. We spent the afternoon having lunch, stocking up on snacks and killing time before our departure. Upon arriving back into Port Moresby it was time for a quick shower to wash the week of dirt off us and have a final celebration dinner with all the trekkers and porters from Kagi. 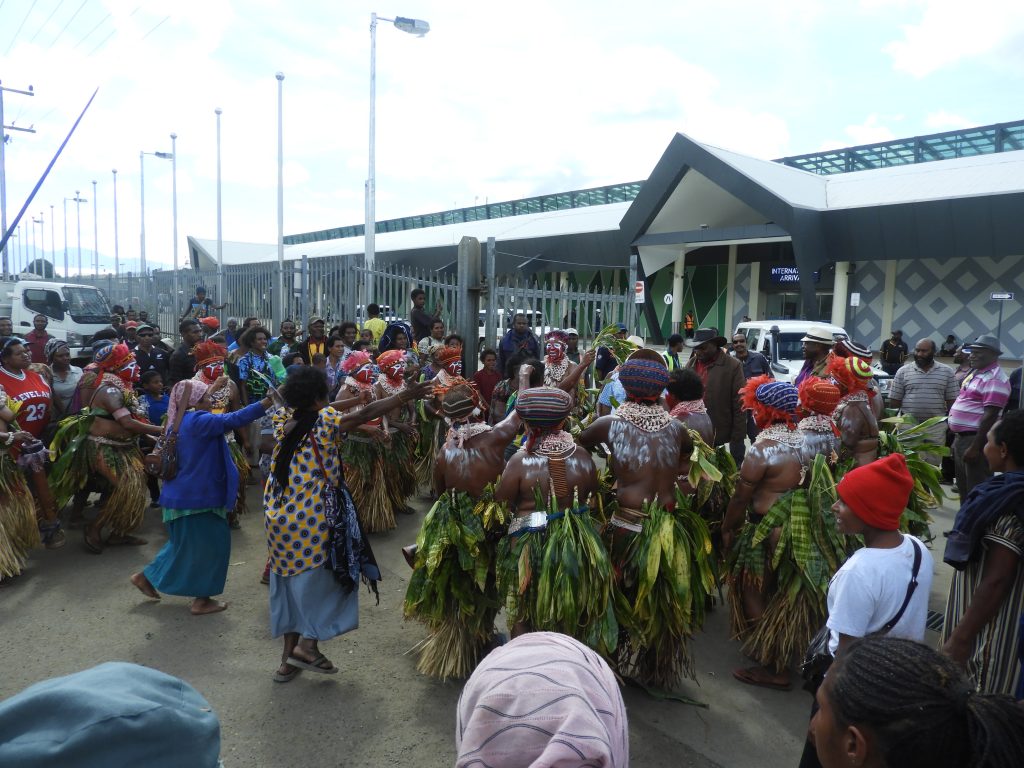 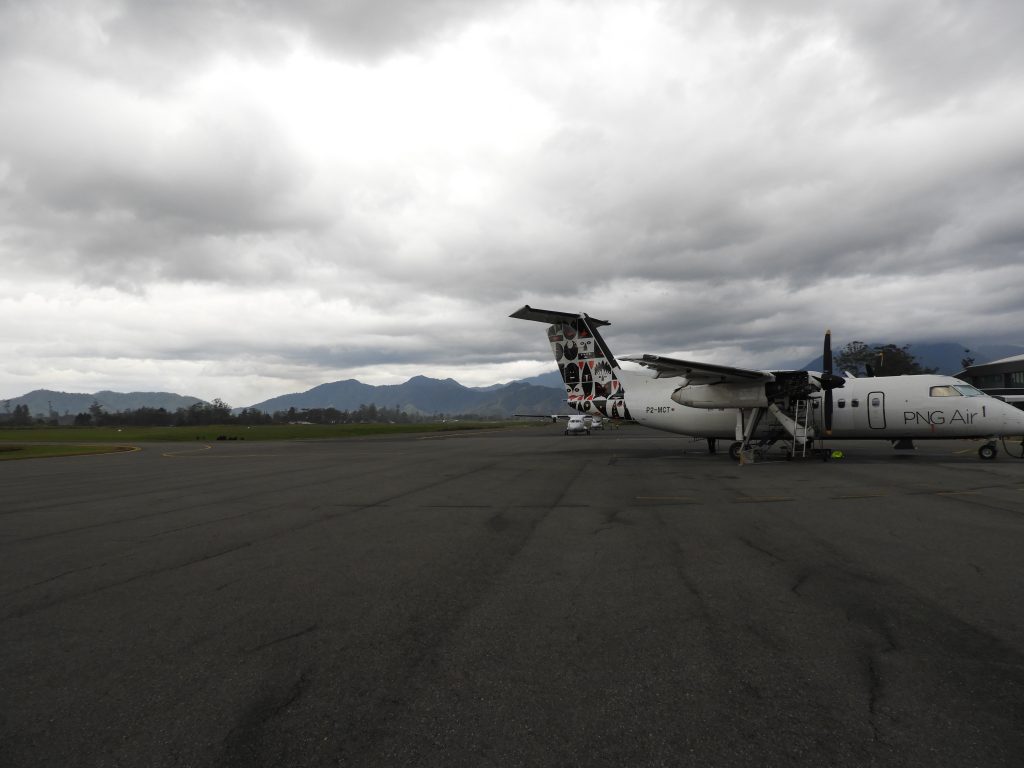 We enjoyed a leisurely breakfast with the remaining trekkers, before departing back to Brisbane, Australia. The flight allowed me to reflect on what I had accomplished, and even as I write this I don’t think it has sunk in that I have completed something that no-one else has done until now. I have always loved being outside, exploring and I love knowing that the happiness this brings me hasn’t yet left. Although hiking can be tough at altitude, the views and experience always win out.

It fills me with excitement knowing that I have completed one of the volcanic seven summits and I look forward to completing the other six volcanic summits in the years to come. Papua New Guinea will continue to hold extraordinary memories for me and will continue to have a new adventure when I next return to explore some more of her beauty.