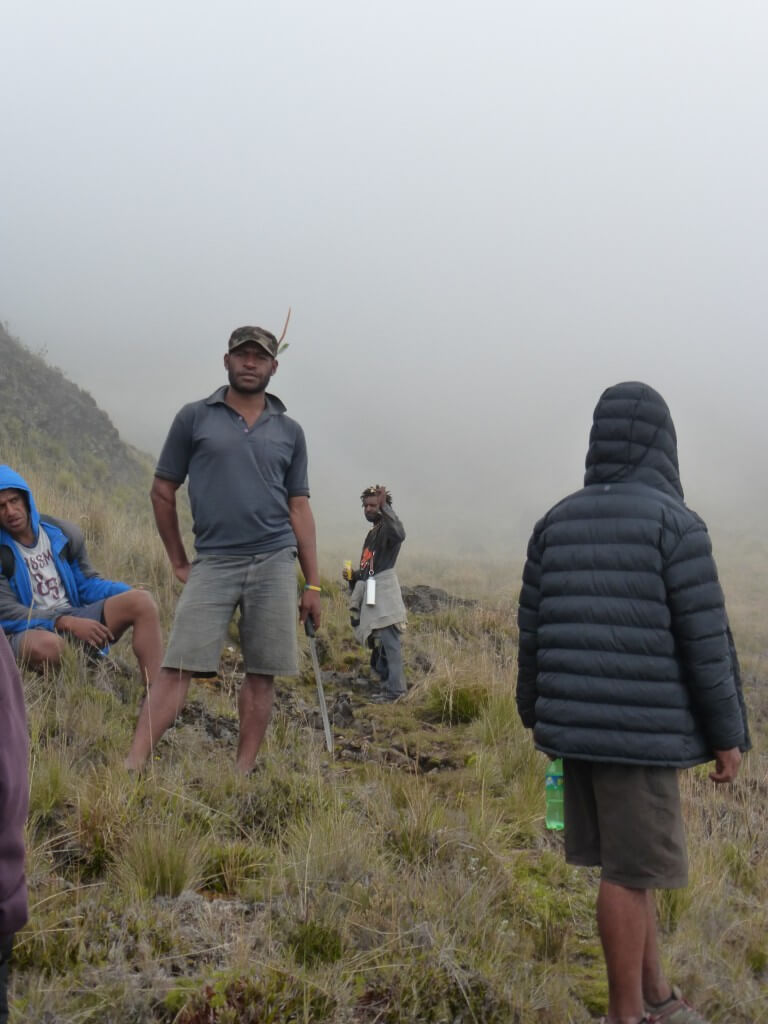 I spent a week in the Papua New Guinea Highlands climbing the country’s second highest mountain and Australasia’s highest volcano. Although Mt Giluwe has been summitted previously, this was the first recorded traverse of the mountain. Traversing a mountain is when you start your journey on one side, climb to the top and come down the other side. This was confirmed by the villagers we met on the way out who have never seen a tourist walk in to their village from Mt Giluwe until now.

Most of the trek was spent above 3700m in high alpine grasslands, however, the untouched forest on the descent is one of the most magical places I have ever experienced.

Papua New Guinea (PNG) is beautifully rugged and is largely untouched by tourism. It would appeal to anyone with a healthy sense of adventure. Whether you are a hiker, diver, or interested in culture and World War II history, there is something to capture your interest. With over 800 languages spoken, Papua New Guinea is often viewed as one of the most diverse countries in the world and has some of the friendliest people you will meet.

After a long flight from Toronto to Brisbane (Australia), I hopped on a “short” 3 hour flight to the Papuan New Guinea capital of Port Moresby. Due to a delay leaving Brisbane I was able to arrive at the same time as the rest of the group. The heat and humidity upon landing was quite a shock and certainly had me looking forward to getting into the highlands and altitude where it would be cooler.

Having previously been in PNG 5 years ago, to trek Kokoda, I was glad to see that the airport and streets of Port Moresby had received much needed upgrades, after hosting the 2015 Pacific Games. The evening was spent meeting the other trekkers, eight of us in total. We had a quick briefing about what to expect in the days ahead and dinner before heading to bed for the early flight the following morning.

We were up at 4am for the last shower of the week and a bite to eat before heading to the airport for our internal flight to Mount Hagen. This marked the beginning of the journey into the highlands. The view from the plane window made it easy to see why so much of the country is rarely visited. The rugged nature of the mountains makes PNG a challenge to navigate. Surprisingly the airport in the Western Highlands Province city of Mount Hagen was spotless. Hagen was a very dusty city and the roads were in an unbelievable state of disrepair. Part of our team, from the Hagen area, were there to greet us and load all our gear on the bus before hitting the grocery store for our provisions for the week ahead.

Landing at 8:30am we had hoped to be on the road and commencing day one of trekking by lunchtime. However, it was one of those days where everything was running on “Papuan” time, taking longer than anticipated. We did not leave the city until after 1pm. Roads in varying states of deterioration meant the drive was slow going navigating around the potholes. The mountainous drive was beautiful. Many people on the side of the road waived as we are passed by. A small roadside market offered a much-needed stretch of our legs, and a chance to buy some of the most delicious strawberries I have ever eaten.

Unsure of the village we were looking for to commence, we stopped a passing army vehicle to ask for directions. We were turned around and drove to the village of Malke. We negotiated with the village to spend the night, rather than starting our trek into the jungle as night was falling.

The villagers appeared from all directions and seemed fascinated in everything we are doing. It didn’t take long for their shyness to disappear and they were happy to interact with us any way possible: playing ball games, talking, and being asked for photos.

Our actual first day of trekking turned out to be a huge day, gaining elevation of approx. 1100m from the village of Malke at 2600m to our first camp at 3700 m. I awoke to an unusual sight, seeing the feet of people everywhere from the door of my tent. The village had turned up early to observe everything that we were doing. Departing the village was slow-moving as we had to pack up everything, disperse the loads amongst the porters and say our goodbyes to the people of Malke. We were finally on our way! A short stint through fields of tall grass before commencing a gruelling 4 hours – straight up through the jungle.

Although there was a trail, the heat, altitude and concentration needed to walk over the tree roots made for some slow walking. The jungle was covered with numerous ferns, mosses and orchids. I was relieved when we popped out of the tree line, into the alpine grass and intense sun.

We had porters from three different villages travelling with us, many of whom haven’t undertaken this style of work before, which made it interesting to try to coordinate everyone and to know who had what food and tents in their packs. By the time everything arrived, the rain had started to come in, but luckily wasn’t falling too heavily before everything was set up. It was incredible to think of the amount of ground that we had covered in one day, especially considering the altitude gain. I was just beginning experiencing how beautiful the highlands are!

Our second trekking day really showed how magnificent the highlands are! After a hard slog straight up a spur we were walking along a ridgeline, getting our first views of the glacial valleys on either side of us and the jagged peaks in the distance. A spur is a long finger of land that comes from the ridge down to the valley floor or river below. It is estimated that the glacier once covered an area larger than 100m2 and was up to 150m thick in some areas. In the valleys below we were able to see numerous kettle holes left over from the glacier, some as deep as 10m that still freeze over in the winter months.

Despite being in a country that is known to be hot and tropical, the terrain made it very easy to imagine the valleys filled with glaciers. A scramble down to a kettle hole for lunch allowed us to check out a nearby cave that would have been comfortable sleeping quarters for a few people – plenty of room to sleep and have a fire. The walk into camp was fairly easy, along the ridge and past a large lake.

Although we found flat ground to set up our base camp, the area was covered in alpine grass tufts and needed to be cleared away before it was suitable for the tents. It was incredible to see how quickly our porters were able to clear the space with their machetes and use the excess grass to pad out the area to make sleeping more comfortable. Base camp was located near some trees and the locals were very quick to set up their own shelters from the branches and vines that they found nearby to cover with a tarp, rather than use the tents that were supplied.

After dinner, we were to witness negotiations taking place to extend the time we required some of the porters for. Luckily, we were able to come to an agreement without too much of an issue. This can be quite a touchy subject asking certain people to remain, that does not always fit in with the hierarchy in their village.

I awoke with excitement for the day ahead and clear weather for our summit attempt of Mt Giluwe. After saying goodbye to some of the porters that were heading home, we were off up the spur to begin our ascent. Although a pretty tough climb due to the altitude, the views over the valleys on either side were well worth it!

From this angle, the nearby un-named and un-climbed peak that we were considering exploring was looking even more menacing than the previous day. The last few hundred vertical metres were quite challenging, as we zig-zagged through the grass on very steep slopes with a considerable vertical drop below.

Before we started the scramble to the summit, three members of the group turned back as they were uncomfortable with the drop below. My bag was carried for me as I started the first scramble, with assistance from the group to secure footing and to ensure we stayed on the mountain. It felt safer to hold on to the grass rather than the hand that was offered for me in some sections. Another scramble of approximately 4m over wet rocks and we were able to see the rocky summit. A 3 hour climb, an elevation increase of approximately 600m and we were standing on the summit of Mt Giluwe (4367m) looking down into the cloud filled valleys.

View from the Top

There wasn’t much room on the summit, only a surveyor pole marks the highest point. It was comfortable with all of us on it to take our photos, admire the views and have a bite to eat. Without the help of the Papuans we would have really struggled to find a safe route to the top as some of the climb was pretty sketchy and most likely we should have been using ropes. The timing of our descent was perfect as the clouds started to roll in obstructing all views, making scrambling down less daunting.

Descending Back to Camp

Halfway back to camp one of the Papuans realised he had left his shoes on the summit and one of the others went back to collect them for him. He still beat us back to camp. They are so much quicker and more agile than we are! Lunch was quickly followed by an early dinner at 3pm due to the clouds creating confusion on when night was falling. We spent the evening looking at the original maps the Leahy brothers created after being the first westerners to explore the area in the 1930’s and reading some of their diary extracts from the experiences they had.