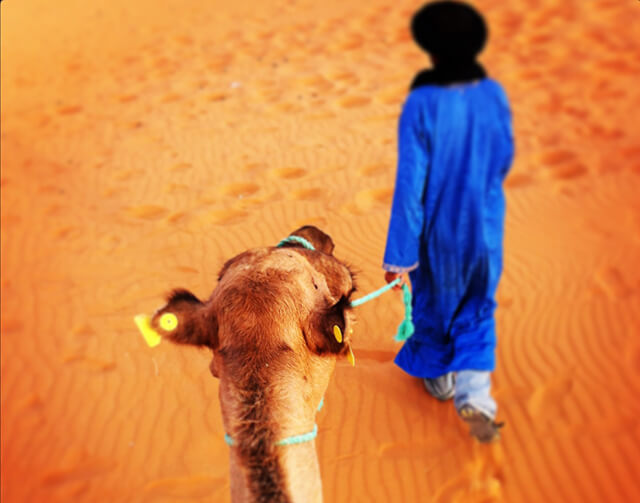 I took an early morning flight to Casablanca and just three hours later after I departed Charles de Gaulle airport I landed in Morocco. It was a little overcast and rainy when I arrived and I missed my train stop from the airport, but no worries I just grabbed a taxi to my hotel.

With my map in hand, I was determined to explore around the city and find the Hassan II Mosque. I managed to walk through the Old Medina, which is like the Grand Bizarre in Istanbul and then walked to the mosque. I managed to get on the last tour of the day and was amazed with the architecture. It first opened in 1993 and according to our guide it’s the third largest mosque in the world, after Mecca and Medina.

The mosque on the inside can hold up to 25,000 people for prayers and another 80,000 could fit in the outlining courtyard. The mosque was built with 2/3 of the building over the Atlantic ocean and it has a retractable roof which would be amazing to see the sun shining into the house of worship. It also has the highest minaret in the world at 210 metres. Look it up on Wikipedia and you can see this incredible mosque.

The next morning the sun was shining bright and it was time to explore around the beachfront area surrounding the biggest shopping mall on the continent of Africa. The mall was called Morocco Mall and had a giant aquarium inside, a children’s amusement area, an ice skating rink and many of the high fashion designers such as Prada, Gucci, Miu Miu and Dior.

From Casablanca my tour took the train to Rabat, one of the four imperial cities of Morocco. Rabat is the current capital city of Morocco and is very much a government city when it comes to employment. We took a tour of the city and saw the Royal Palace, but unfortunately our invitation got lost in the mail to have tea with the King.

Then from Rabat it was back on the train to Meknes. Meknes was also one of the four imperial cities back in the day. A couple of locals I met went exploring that evening for some cheap and good local food. We found this yummy place around the corner from my hotel that had some delicious traditional Moroccan food. I was so impressed with the food, I thought I am definitely going to look up some Moroccan restaurants in T.O. when I get back home!

From Meknes, I journeyed to the ancient site of Volubilis. This site reminded me of Ephesus, but on a smaller scale and not as many ruins put back together. The detailed mosaics were impressive and it gives you a good idea of the layout of the city. After visiting Volubilis, we arrived in Fès, the oldest of the imperial cities. Fès has been my favourite city in Morocco so far. The souks (markets) are massive and many little lane ways where one could easily get lost. This place kind of reminded me of an Indiana Jones movie. Cue music… 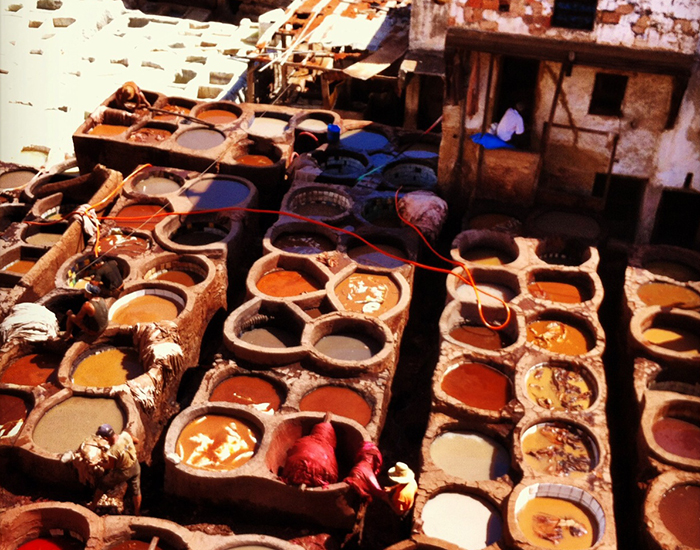 On my last night in Fès, I tried pastilla, which is a traditional Moroccan dish. It is a phyllo pastry and is filled with chicken, onions and various spices and on top of it is sprinkled with cinnamon and icing sugar, delicious! I discovered on our tour of Fès that traditionally it was made with pigeon…but I am confident they served us with chicken. I kept repeating to myself, “it was chicken, it was chicken”. In any event it was delicious.

Our tour around Fès took around to some of the historic sites and a great vantage point of the entire city from an open air mosque. We walked through the souks and saw the “Tanneries”, where they take the skins of animals and put them through the process of preparing them for leather goods and dying them. It was very cool to see this process, despite the strong odor. We also saw some pottery and textile making shops.

After leaving Fès, it was off to the desert driving through the Middle Atlas Mountains. I was impressed by the grandiose size of the mountains in Morocco and the winding roads along the cliff’s edge. My tour arrived in Merzouga, which is a small town near the edge of the Sahara desert. The golden sand dunes rose high above the ground in the blistering heat. I wrapped my head with a scarf just like the locals, to prevent sand from blowing in my face and to protect from the heat.

That evening I was rewarded with an amazing sunset while trekking on a camel. My camel’s name was Omar Sharif and he was a large animal to carry me through the desert. It felt like a scene out of a movie, listening to the sand blow against the dunes and no one around while only two of us approached the high dunes.

We came to a stop and got off the camel to watch the sunset and I played the classical piece “A Night on Bald Mountain” as the sun disappeared over the horizon. The colours in the sky were spectacular with reds, oranges and yellows and no other sounds around just total silence in the vast Sahara. The camel ride back to the hotel in dusk was peaceful and the night sky was perfectly clear with all the night stars clear and the moon shining bright. It was great to see the natural beauty of the evening sky without any light pollution around.

After the desert, it was off to the mountains again and explore around the Todra Gorge. The dramatic cliffs of the gorge rise vertically to leave a narrow pass through the river and where our day trek took place. The peak we climbed was 1900 metres under the scorching sun was out to beam upon us. I was ahead of the group most of the time, but when others arrived at the top I cheered them on for their success. I thought to myself I really need to do some more hiking around Toronto, as it is something I really thoroughly enjoy. We did more driving to small villages in the High Atlas Mountain range and we were taken through the Tizi n’ Tichka, the highest vehicular pass in all of Morocco. The drive was spectacular with many a-ha moments.

We also explored around the souks (market) where the locals would buy everything from produce, sheep (live & dead), get their haircut and get some teeth pulled out (both by the same guy) and many wonderful spices. It was quite the experience to walk around and explore, and away from the tourists. The day ended in Imil, which is a small village in the mountains. In the winter, the peaks of the mountains would be covered in snow, and at times even the ground. You could notice a big difference in the temperature in the evening once the sunset. For our last dinner I had the best chicken tagine ever – the flavours were delicious! 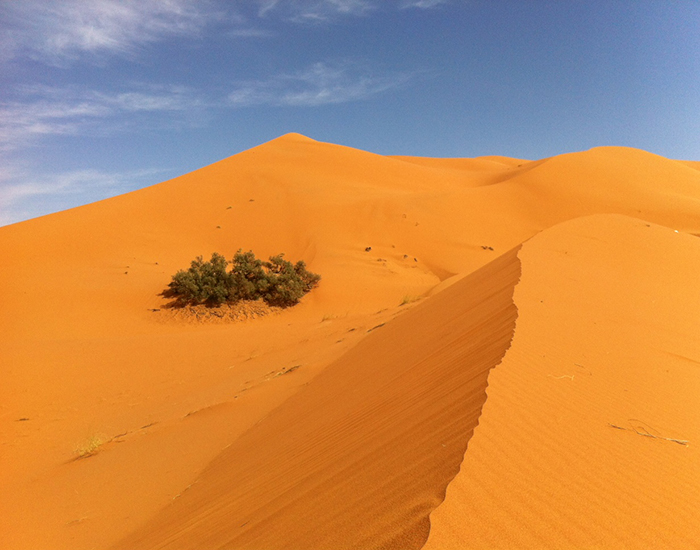 Then we headed to Essaouira, which is a small (former Portuguese) fishing village right by the Atlantic Ocean. I was excited to to try some fresh seafood and some swimming in the ocean. I enjoyed the beautiful ocean views while I read for a couple of hours in a restaurant, and craving to have a beer. It’s hard to find any alcohol in this Muslim country, but no big deal; I enjoyed an ice cold coca cola and the views for the rest of the afternoon. This city has many charming characteristics, like the fisherman returning to the habour and selling the fresh catch of the day, and the medina which was the perfect size (I didn’t feel lost in a maze), and the cats walking everywhere looking for scraps from the fisherman. Essaouria is very much a beach culture, with a long sandy beach just off of the medina. I spent most of my afternoons here watching the many locals playing soccer and surfers riding the waves. It was hot and beautiful while we were here and a perfect time to finish one of my books.

After Essaouria, it was off to the mystical magical Marrakech. I’ve been waiting to spend my last five days in Morocco here in this former imperial city. Marrakech is such a vibrant city especially with the main square of the city called Jemaa el-Fna. This square is a UNESCO world heritage site for all the animated experiences one can have in this area. There are snake charmers, locals holding monkeys who want to put them on your shoulder for a photo, entertainers from singers and acrobats, ladies doing henna, plenty of food stalls that come out at night, and more stalls of vendors selling anything and everything. I found there was a huge contrast from day to night here in this square, with my preference for the evening hours.

I visited the Jardin Majorelle, which was designed and conceived by an artist with the last name Majorelle. The bright vibrant colours in this garden with plant species from every continent (except Antarctica) were then bought by famed French couture fashion designer Yves Saint Laurent in the 1980′s. It was such a peaceful and relaxing place to visit away from the hustle and bustle of Marrakech. I give a big thumbs up recommendation for anyone visiting this city.

My explorations also took me to the Saadiens tombs and the Bahia Palace. For the most part, my visit in Marrakech consisted of people watching in the main square and some relaxing by pool; much needed after a busy couple weeks traveling all over this beautiful country.

On my last day, I decided to try out a hammam spa. It was a different experience from the Turkish bath scrubs I experienced last year. It was relaxing and a good way to end my adventure in Morocco. Just beside my hotel was the Koutoubia mosque and I could hear the call to prayer which played from here. This is the largest mosque in the city of Marrakech and unfortunately I was not able to go in, as it is only open for Muslims to pray and no tourists.

Morocco is a great country with the great people who are willing to show you around. The country has amazing dishes to tempt your pallet and beautiful scenery to turn your neck around every corner.  I would strongly recommend a vacation in this beautiful part of the world.