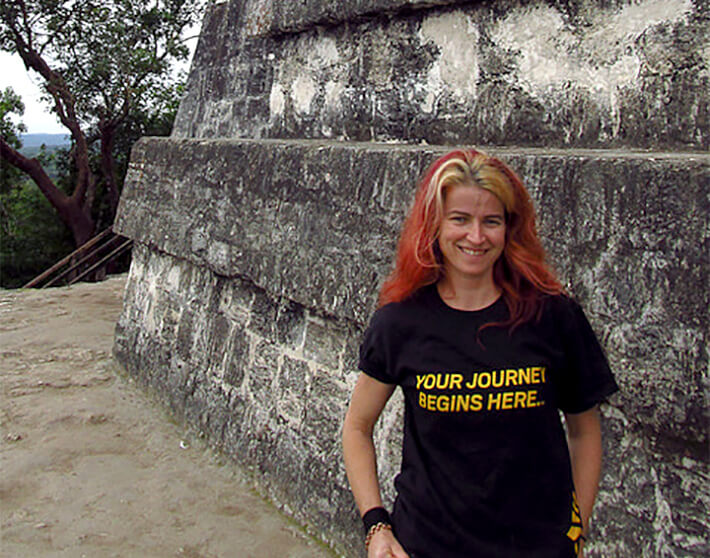 Mid January was the perfect time to leave home and head on an adventure to Guatemala, Belize and Mexico. I joined 11 other people on a group tour that featured travelling from Guatemala to Mexico over a 13-day trip.

When I saw views of mountains and volcanoes flying into Guatemala City, I already knew I should have booked more time. My first stop was the pretty little city of Antigua. It’s close to Guatemala City but a world apart. Antigua is full of colonial style churches, colourful buildings, and bright flowers which made walking around the city a lot of fun. Antigua is also a UNESCO heritage site and has a very relaxed atmosphere. 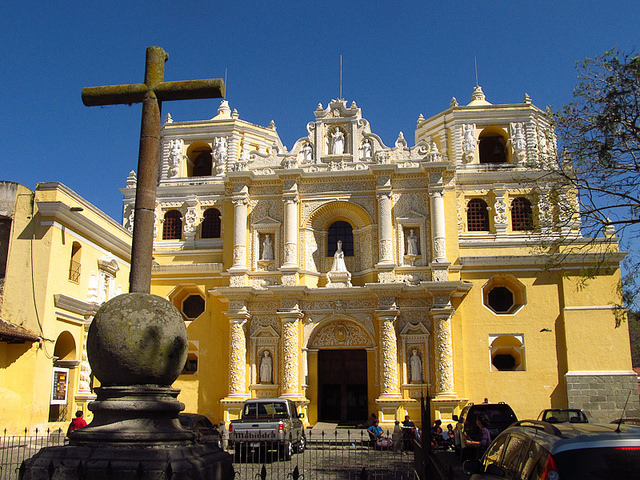 Again, I wish I had arrived a few days earlier so that I could sneak to the lake district, or hike the active volcano that are both fairly close by… but since I only had one full day, I stayed in town. It was beautiful and relaxing and well worth my time. Others in my group did the hike to the volcano, enjoyed a chocolate and coffee tour, and a couple of people decided to do a 28km tour around on cobble stone roads! Great start. 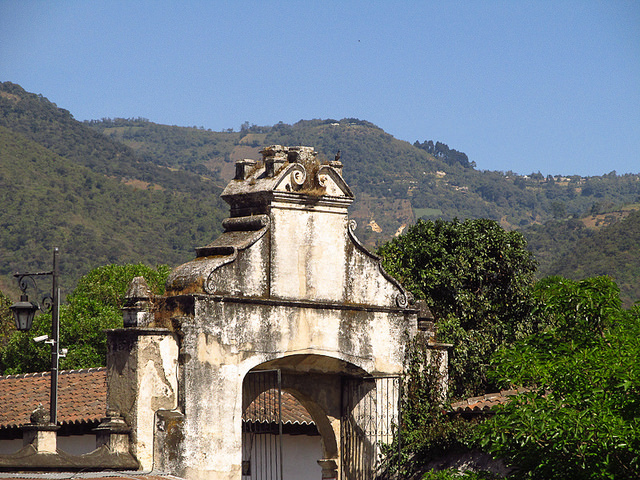 From there my next highlight was the Mayan ruins of Tikal! Amazing structures, which were hidden from the modern world for centuries. I love how they have only unearthed some of the ruins, and sometimes only half of them to show how they were hidden in the jungle for so long. The structures they did unearth tower over the jungle and are truly a work of art. We had lunch on the tallest structure overlooking a carpet of tall trees. The ruins that were covered up must have been so easy to overlook at first because they just look like regular hills with trees growing from them. I really loved this area and walking through the jungle with its crazy vines, colourful mushrooms and seeing so much green in January was such a treat – I took massive amounts of photos. 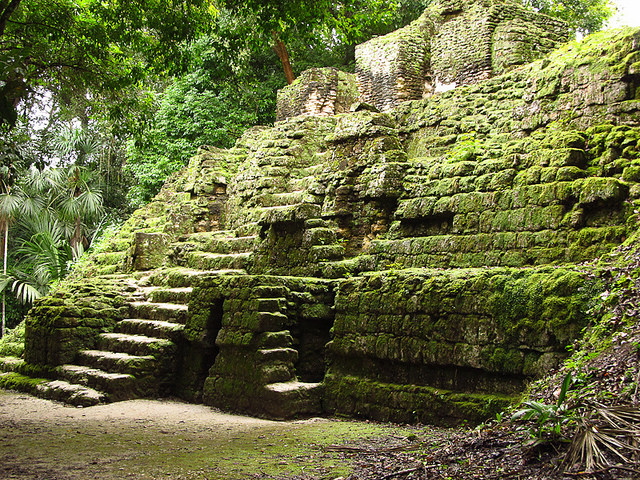 Flores is an attached island with cobblestone roads, a huge cathedral and tons of shops and restaurants. It was a fun place to spend the day and wander. I was sad to leave Guatemala but the next stop ended up being my favourite part of the entire trip. It was easy to instantly fall in love with Belize. I love caves and I’ve climbed, crawled, and squeezed myself through many in this world, but ATM (Actun Tunichil Muknal) is the first one I have ever had to wade through chest high water to get to. We actually had to cross through a river 3 times before even reaching the cave entrance. Once we arrived we had to wade in with our hard hats with head torches, and (mandatory) shoes and socks. The cave had amazing formations including waterfalls, shields, columns, and colours from the various minerals. I loved it! We walked through water, climbing along rocks, and swimming through sections in the wet portion of the cave. Then we reached a full-length metal ladder that we had to climb before heading to the dry section of the cave. This is the portion that has been featured on National Geographic and a number of articles.

Once we all reached the top of the ladder it was time to remove our shoes and wear our socks into the archeological section of the cave (socks help to protect the cave from our natural oils and sunscreen). Archeologists believe the Mayans had rituals there every 20 years. They discovered 13 bodies in the cave as well as many ancient pieces of pottery. The archeologists never moved any of the remains and after centuries the skeletons have become a part of the cave. We did see a few of the skeletons with traditional flattened skulls, the cave slowly swallowing them up.

No one is permitted to bring cameras (or anything at all) into the caves anymore after a tourist lost his footing and dropped his camera on one of the skulls, leaving a hole in it. Not bringing a camera is a bit of a mixed blessing. I would have loved to take photos, but dragging it in and out of a dry bag would have been a nuisance… This was the highlight of my trip, and anyone interested in caves or archeology will love it.

From here we were off to Caye Caulker Island, just a lovely boat ride away from Belize City with the second largest reef in the world. I had somehow left Central America behind me and was now in the Caribbean: bright blue and turquoise waters and white sandy beaches. We spent a few days here just soaking up the sun, enjoying good food and snorkeling. I snorkeled for two full days and swam with sharks, rays, turtles, and some pretty cool fish. I have never swum with sharks but I counted while I was in the water and there were 20 nurse sharks within my visual range! Woohoo! 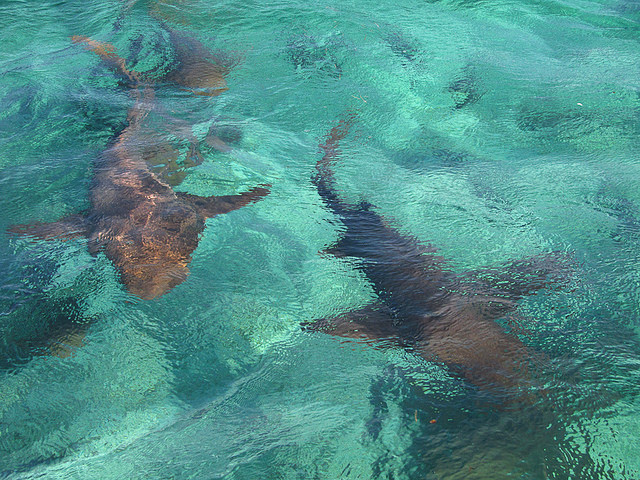 Last stop was Mexico to see the ruins of Tulum. Tulum is probably one of the smallest Mayan ruin sites, but because it is right on the ocean, it’s very popular and beautiful! A group of us walked to the site while the rest rented bikes. I really enjoyed it, but once I saw that white sand beach I stopped wandering around and headed down to the beach. The water was amazing and clean. When the tiny beach at the ruins started to get busy we all left and headed to the public beach that was a 5 minute walk away. The rest of the day was filled with well deserved beach time and fruity drinks. 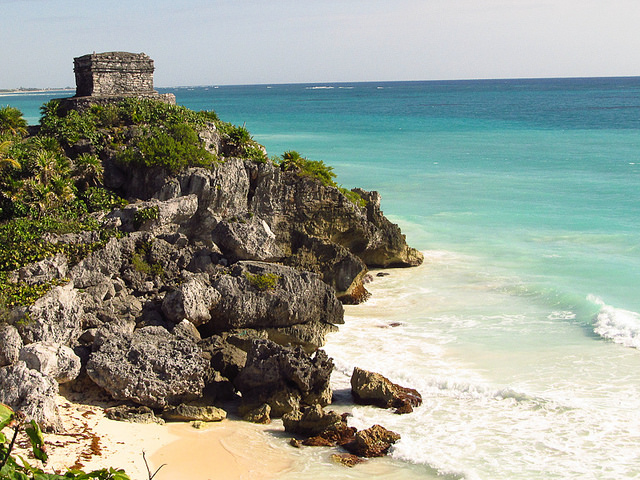 From here it was off to busy Playa del Carmen for a night before heading to Cancun airport.

I had a fabulous time in Guatemala and Mexico and I’m so glad that I went. Now I’m back to the snow and already plotting my next adventure… Galapagos here I come!