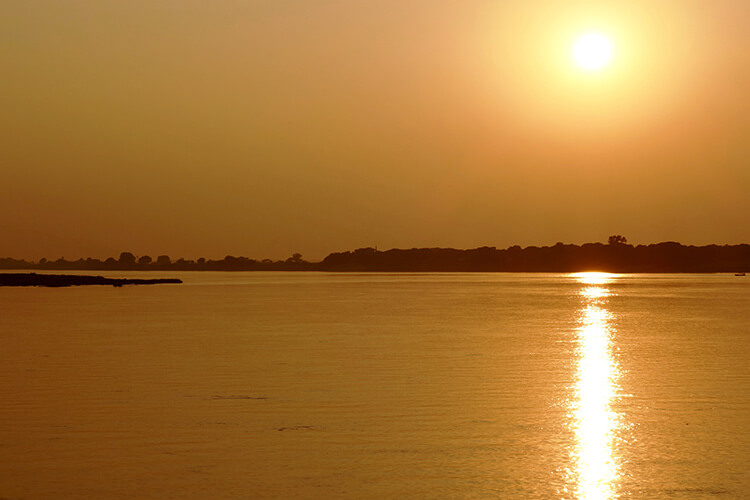 As the sun rose over the Irrawaddy we had a quick breakfast and Sanda lead us onto a smaller boat to take us to Elephant Island and the village of Sin Kyun. Located in the middle of the river, Sin Kyun floods every year so all the houses are built on stilts. In a demonstration of Buddhist values, a neighbouring village takes care of the animals while the villagers switch their bicycles for boats for a few months.

This village sees few westerners and gives us a firsthand look at local Burmese life. Leaving the island, we head for the unfinished temple of King Bodawpaya at Mingun. This colossal pagoda would have been over 150 metres high if completed. Today, it sits cracked by earthquakes and unfinished, a reminder of the grand, ancient Burmese civilization of old. Just down the road is the Mingun Bell, the largest cast bronze bell in the world. After lunch and relaxing on the deck we watched a Longyi tying demonstration (a type of sarong) and received our very own traditional Burmese Longyi.

The village of Pakokku was our first stop this morning and the gateway to the ancient city of Bagan. The local market has more sights, sounds and smells than you can imagine. Bees buzz around palm sugar candy, wicker works are carried in huge stacks, teas, vegetables and all sorts of local goods are bartered and haggled over. Sanda introduces us to Thanaka paste for us, a white paste that can be seen on the majority of women and children’s faces to protect them from the harsh sunlight. After a cooking demonstration onboard our boat Ananda, with a local chef, we headed for Myinkaba village to visit a high quality lacquer workshop.

Later, Sanda picked us up by horse-drawn carriage for our first glimpse of the temple plain of ancient Bagan, an open air museum of temples and pagodas from Burma’s longest reigning dynasty. The city of Bagan was the height of ancient Burmese civilization. We were fortunate to see the stunningly red sunset dropping between the temples and enjoyed the total silence as the horses pulled up at the foot of one of these great temples. 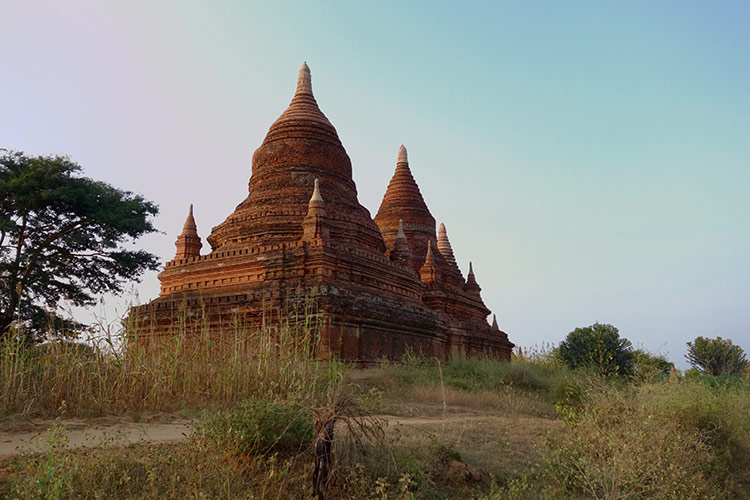 Today as a gift to my wife on her birthday, we rose at 4am to go hot air ballooning over Bagan. After a bumpy ride on a pre-world war two bus to an open field, the giant balloons carried us up above ancient Bagan. Floating high above the temples you really get a feeling for how large this city once was. Some champagne on the ground capped off a fantastic morning.

Next stop was the temple of our boat’s namesake, Ananda. Regarded as the most beautiful temple in Bagan, Ananda didn’t disappoint, having recently resorted bringing the white temple walls back to their former glory. Leaving the temples behind, we drove into the foothills of Mount Popa, featuring a monastery on a hill, the path to which is patrolled by troupes of monkeys who are more than happy to borrow your food or camera if you let your guard down. Instead of making the hike up, which must be done in bare feet as it is a religious site, we drove up to opposite hill for a lunch overlooking the monastery. That night, Ananda had a treat in store for us. When the Irrawaddy is low, lots of sand bars are exposed and the crew had set up a BBQ dinner on the sand. Anchored off the sand bar, we were ferried over and had a candle lit dinner under the stars. 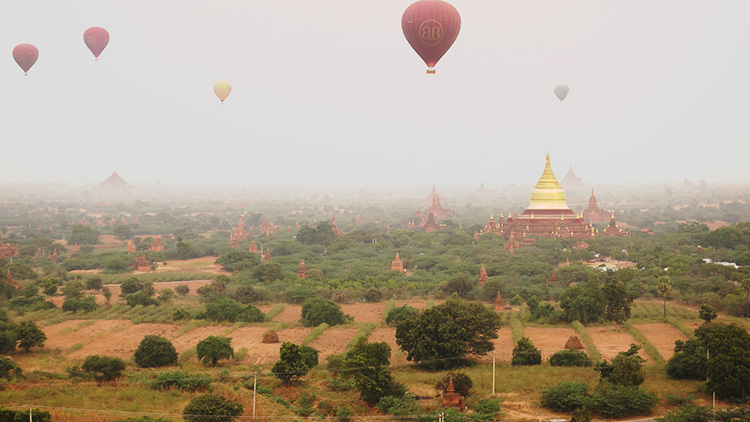 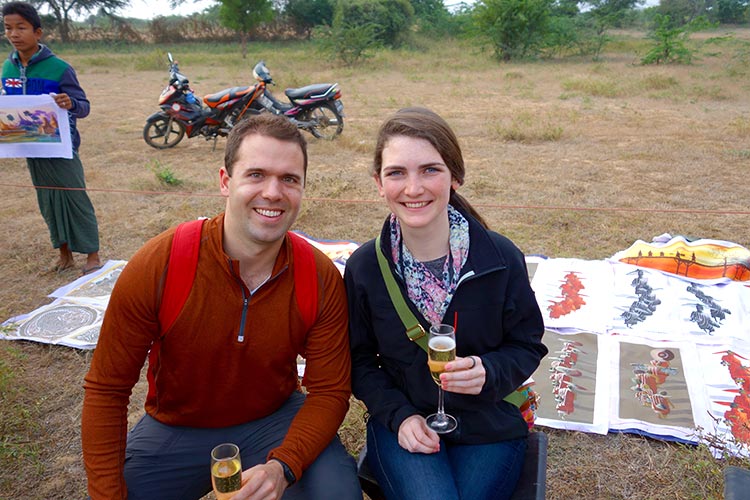 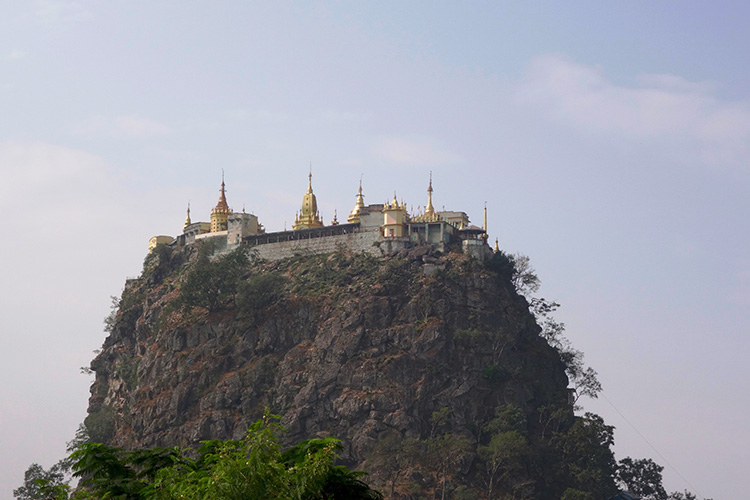 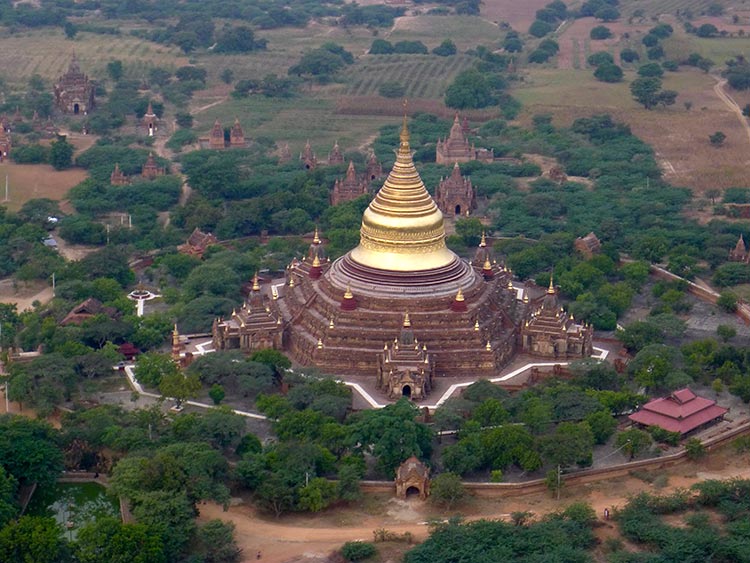 The final day of an adventure is always bittersweet and this was no different. A&K picked up our bags early in the morning, we had a quick breakfast and then disembarked Ananda for the last time. Catching a quick flight from Bagan airport to Yangon (none of our flights were more than 90 minutes), we returned to the hustle and bustle of Myanmar’s biggest city.

After lunch, we had a quick visit to the National Museum of Myanmar which features amazing antiquities of ancient Burma and relics of modern Myanmar. From there, we headed into the very centre of colonial Yangon to Sulé Pagoda, the site of protests throughout the country’s tumultuous history and now a chaotic roundabout that would put Paris to shame.

An interesting fact about Myanmar is that while the country drives on the right hand side of the road, most of the vehicles are right hand drive. This makes turning a particular challenge and boarding a bus with the door open into traffic a harrowing experience. 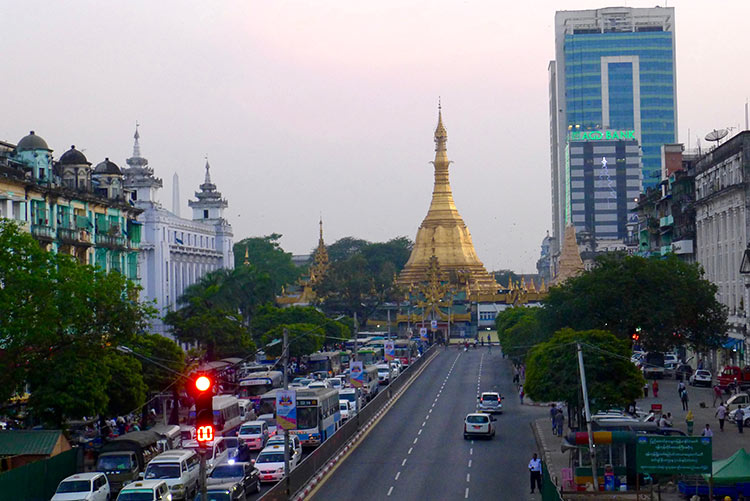 A stroll in the Yangon heat is mercifully broken with a stop at The Strand Hotel, a colonial landmark. When we returned to the Shangri-La Hotel, we said goodbye to Sanda and the rest of our group. Sanda and Abercrombie & Kent took such good care of us over the entirety of our wonderful trip. Sipping a beer and reminiscing about our trip, we know that we’ll be back to this amazing country with extraordinarily generous and welcoming people, fantastic food and unbelievable landscapes that absolutely took our breath away.