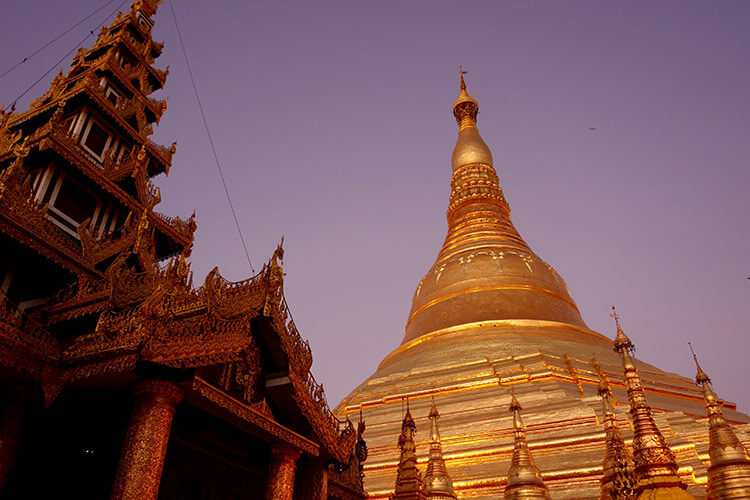 We flew into Yangon International Airport, from the massive Bangkok International Airport and and were met by our Abercrombie & Kent guide. The 16-km drive into central Yangon where our hotel was, took over 90 minutes because of traffic and construction! After arriving at the Sulé Shangri-La, we went in search for dinner. Our tour didn’t begin until the next day, so we had the night to ourselves to explore Yangon. Our driver had directed us to Feel Myanmar, a small chain of restaurants featuring amazing local recipes. We washed that down with Myanmar Beer, one of the only beers in the country and then headed to bed to rest up before our adventures began the next day.

Sanda (our guide) met us in the lobby bright and early. We headed out for a walking tour of downtown Yangon, starting in China Town. Turns out, every city in the world has a China Town, no matter where you are. Streetside markets, bartering and the sounds of a growing city are all over. Trucks try to fit down narrow streets as stray dogs weave in and out of the tight squeezes in the side roads. After strolling out of China Town, we stopped by Musmeah Yeshua, the last synagogue in Myanmar, still tended by its founder’s children.

After lunch, we visited the Reclining Buddha at Chauk Htat Gyi Pagoda. The scale of the 213 foot statue needs to be seen to be believed, particularly when you see its intricately detailed feet depicting the life of Buddha. As the sun sets, we removed our shoes and entered Shwedagon Pagoda, a 2,600 year old Pagoda, and the most sacred Buddhist site in Myanmar.

Boarding a Russian turboprop at Yangon’s domestic airport with our hand written boarding passes was a uniquely rustic experience! A couple of hours later, we touched down at Heho Airport; gateway to The Shan State in western Myanmar. The name Myanmar is the newer name for the country, with the old name of Burma coming from one of its indigenous peoples. Burmese people are the predominant peoples of Yangon, but Heho is dominated by Shan peoples.

After seeing how traditional paper and umbrellas are made by hand, we started the couple hours’ drive to Inle Lake, stopping at a couple of pagodas and monasteries along the way. The scenes along the side of the road was constantly changing and people’s traditional dress of colourful jackets and Longyis dotted the small communities along the road to the lake. After a quick lunch of traditional Shan flavours, we boarded our long tail style boat and headed out onto the lake. The last stop of the day was at a floating pagoda featuring monk trained cats – before heading to the Inle Lake View Resort. Set way back from the banks of the lake, this tranquil resort was our home for the next two nights. 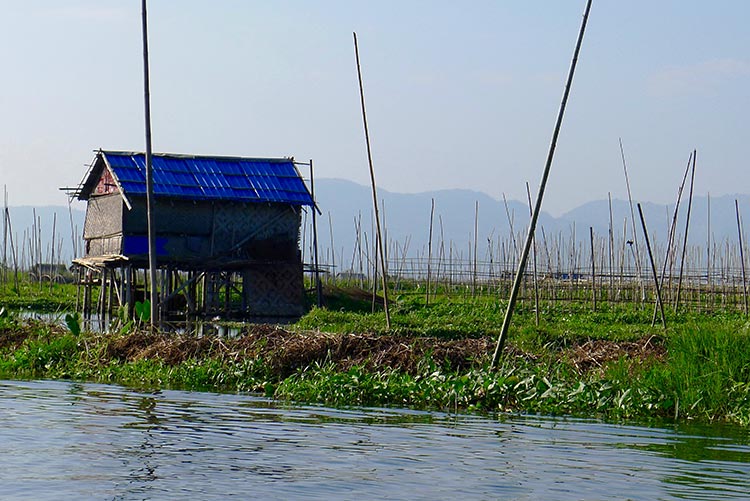 Watching the lake come alive is magical. Fishermen stand on the bows of their small boats, balancing on one leg as they cradle an oar in another, using their hands to pull fishing line or baskets out of the shallow water. They might catch a couple dozen fish and make the equivalent of 4 or 5 US dollars each day. 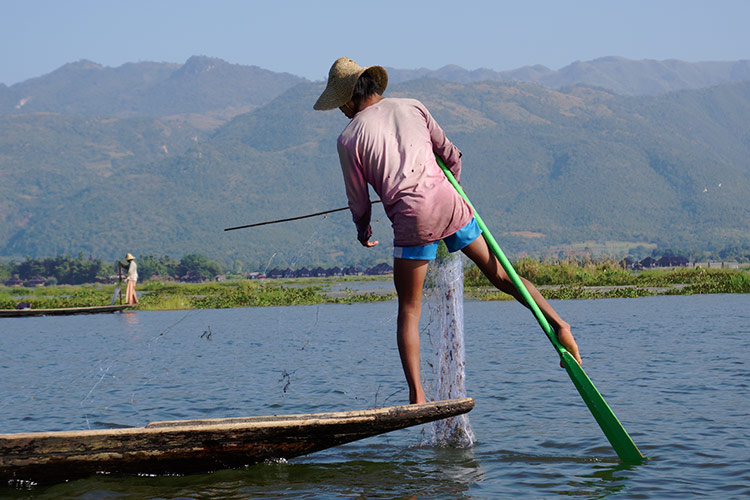 We headed for a moving market, which packs up every day and changes location on the lake so that locals do not have to travel too far for their shopping. The “tourist” market is a couple of small stalls, which include chickens, vegetables, homemade tofu, tea leaves, clothes and children’s books. As we smiled at vendors who speak no English at all, the smiles we received in return are heartwarming and welcoming. 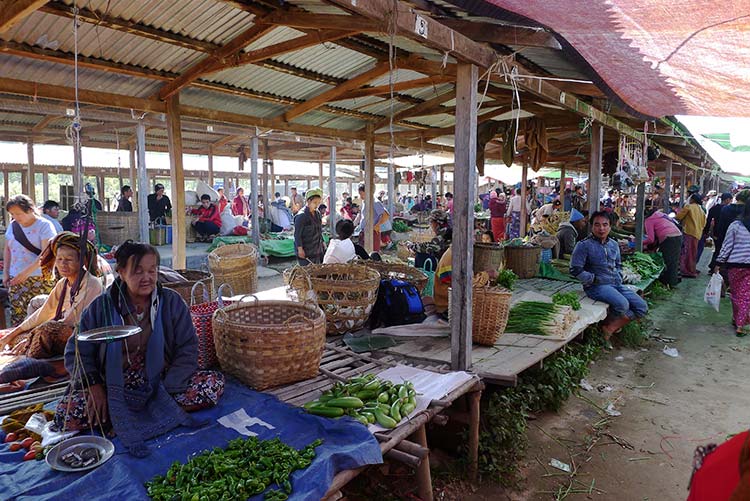 Myanmar has recently begun to accept visitors and those lucky enough to get a visa are met by incredibly generous people who balance their increased exposure to the world, with their traditional Buddhist values. It’s like a postcard; watching families go about their lives, piling into their small boats, from their houses built on stilts on the lake. The floating gardens and fields are a marvel of simple engineering that allow these people to live entirely on the water. We are fortunate to be given the opportunity to watch and participate in a traditional Intha dragon boat, foot rowing race. With no thanks to me, our boat was victorious, but I’ll leave the foot rowing to the Intha. 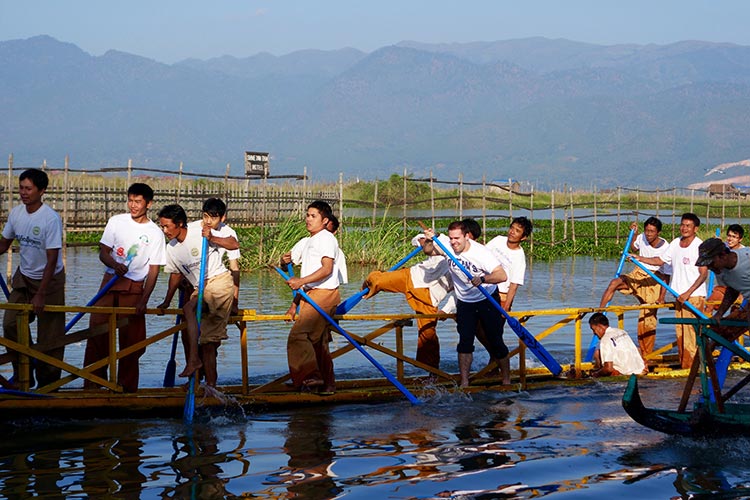 The sun rose on day five and it was simply magical. Steam rose off the lake and the silence of the night slowly broke as we had breakfast overlooking the water. While on the lake, the heat was somewhat tempered and the altitude of the lake itself made the nights a little chilly. But this being south-east Asia, as we drove back to the Heho Airport and farther towards sea level the heat was turned right back up.

We were on a tight schedule, so flew to Mandalay. Shortly after we saw the Mahamuni Pagoda where the men in our group placed a gold leaf at the foot of a statue of Buddha, which is said to have been cast in the presence of Buddha himself. At lunch time, we boarded the luxurious Sanctuary Ananda, our home for four nights. After a quick lunch the boat moseyed down river to drop us off at Sagaing, home of the densest population of Monks in Myanmar. Visiting a monastic school on the way to Amarapura, we were stuck by the number of young girls flocking to education and were inspired by the work that the monks and nuns are doing to educate so many.

As the sun began to set, we boarded a small and colourful boat underneath the U Bein Bridge. This three-quarter mile bridge crosses Taungthaman Lake and sees hundreds of commuters a day. As we enjoyed a sundowner and watched the sun set behind the bridge, I couldn’t help but smile and add this place to my list of “most beautiful places on earth”. 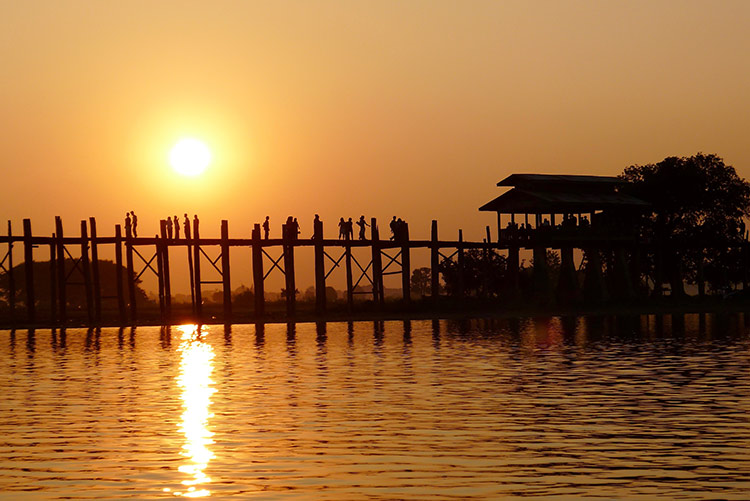 Look out for Part 2 of Jason’s trip to Myanmar!