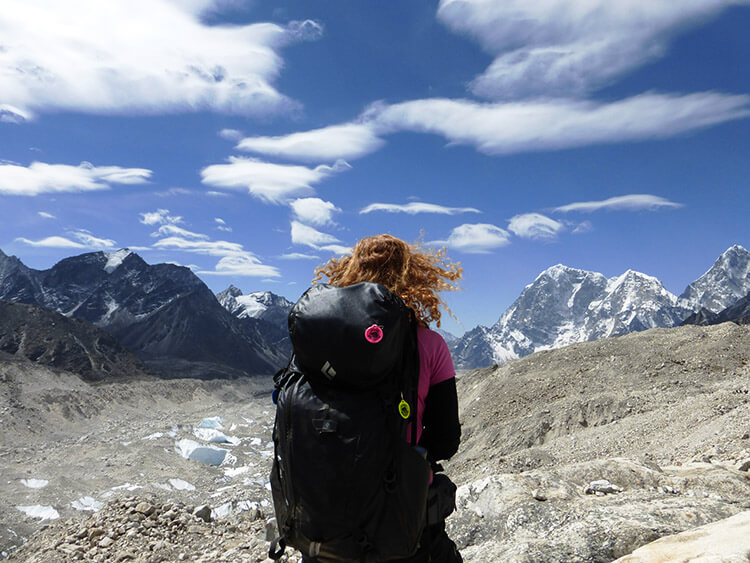 Trekking to Base Camp and summiting Island Peak

I have hiked a fair bit throughout my travels, many being day hikes and my longest being a week in Papua New Guinea, but the time had finally arrived for me to embark my longest adventure of trekking and climbing. I’ve had my sights set on the Himalayas for quite some time, so I jumped on the long flight to Nepal to get amongst some of the highest mountains in the world. Deciding which trek was a hard task, but since this was my 30th present to myself, I decided a challenge was in order. I was going to trek to Everest’s Base Camp and summit Island Peak in 17 days.

I landed in Kathmandu and it was a little difficult to take in at first.  The busyness of the streets, the bikes, horns, dust and pollution was overwhelming – but the city grew on me after a few days. It wasn’t long before I started noticing the little Buddhist stupas and Hindu temples lining the roads, down alleyways and in doorways. Some areas (but not all) still have significant earthquake damage, but it’s easy to see the grand scale and beauty some of these stupas and squares once had, along with the restoration work that is slowly starting to take place.

After a couple of days exploring Kathmandu, getting fitted for mountaineering boots and down gear, along with purchasing last minute supplies for the trek, I woke up early with the anticipation of flying in a small aircraft into Lukla. Lukla is considered to be one of the world’s most dangerous airports, partially due to the close proximity of the mountains and also due to the fact that the runway is technically a little too short, so it is built on a slope to assist with take-off and landing. Unfortunately, after sitting in the airport for the whole day, the flight was not going to happen due to poor visibility in Lukla.

The next morning, the smog was so heavy in Kathmandu I anticipated that we would be spending another day waiting in the airport, but to my surprise our flight was called at 7am and we were on our way in the twin otter to Lukla. Although a little bumpy, we were soon climbing out of the smog and soaring above the clouds. Soon I was to see my first glimpses of the gigantic peaks of the Himalayas. The ridges of the smaller mountains started to appear through the clouds below and next to me. It was clear why a pilot needed to trust his eyes rather than rely on technology.

After sorting out our bags for the porters and a cup of tea, it was time to start trekking. The first day was fairly easy, it was mainly downhill and before the altitude really kicked in. The track was pretty dusty, but it was nice to be out of the city, walking amongst the trees, small villages, porters, mules and yaks and in the mountains again.

After the first day we spent the night in a tea house, which was quite comfortable given the basic accommodation, but I knew that the time had come to get into the longer and more strenuous trekking days. 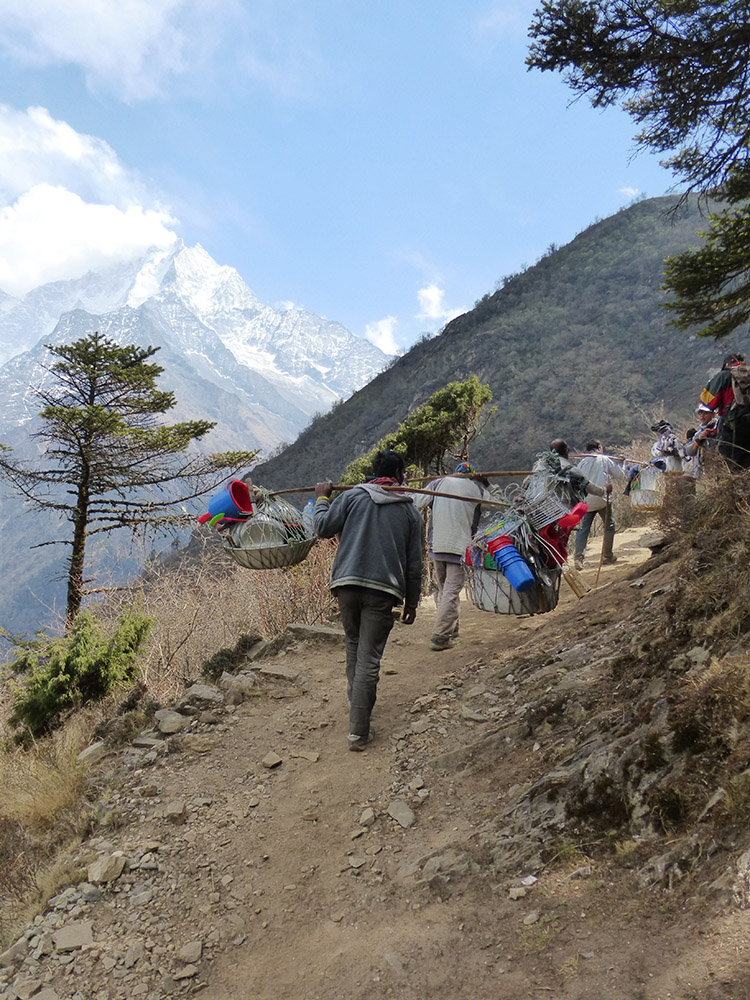 Although we would gain 3500m in altitude over the coming weeks, it was not all walking uphill – of course there is a lot of that too. In the first couple of days heading into Namche, there are a lot of river crossings, including over the dancing (suspension) bridges, so what goes down must go up. The trails are quite a mixture of Himalayan flats (a little up, a little down), long valleys and steep sections (especially on acclimatisation days).

Generally, the trails are dusty, rocky stairs or loose rocks and scree, with some areas having some pretty sheer drop-offs. Even on the long slogs, it wasn’t long before you were at the top or taking a tea break and admiring the views. With the difficulty in breathing and slow going, one of my favourite things about hiking at altitude is it makes it perfect for plenty of stops to absorb the surroundings and take a few pictures. 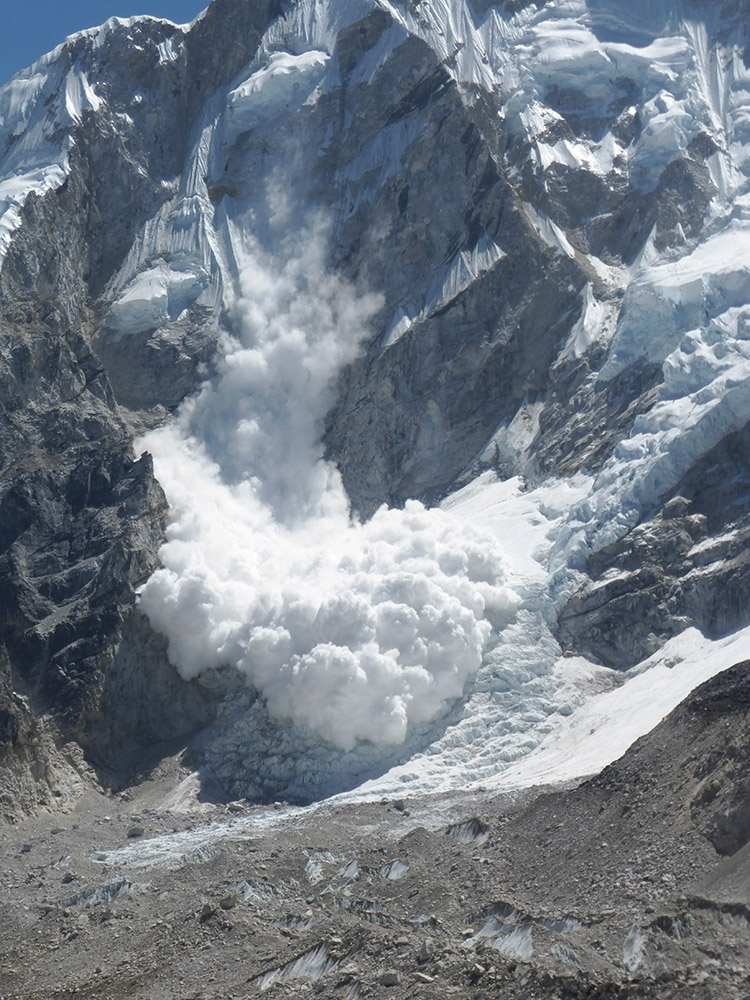 I knew the porters would be strong, but some of them seemed superhuman, carrying anything up to around 100kg! From looking at some of the loads, it seems the porters are carrying more and heavier amounts than the yaks and mules. It certainly started to make me look at everything a little different when you know everything has been brought in on the back of a person, including all the food (meat included that’s not kept cold or protected from the sun and dust), materials for the tea houses and bridges. Very little is transported in with a helicopter due to the cost. 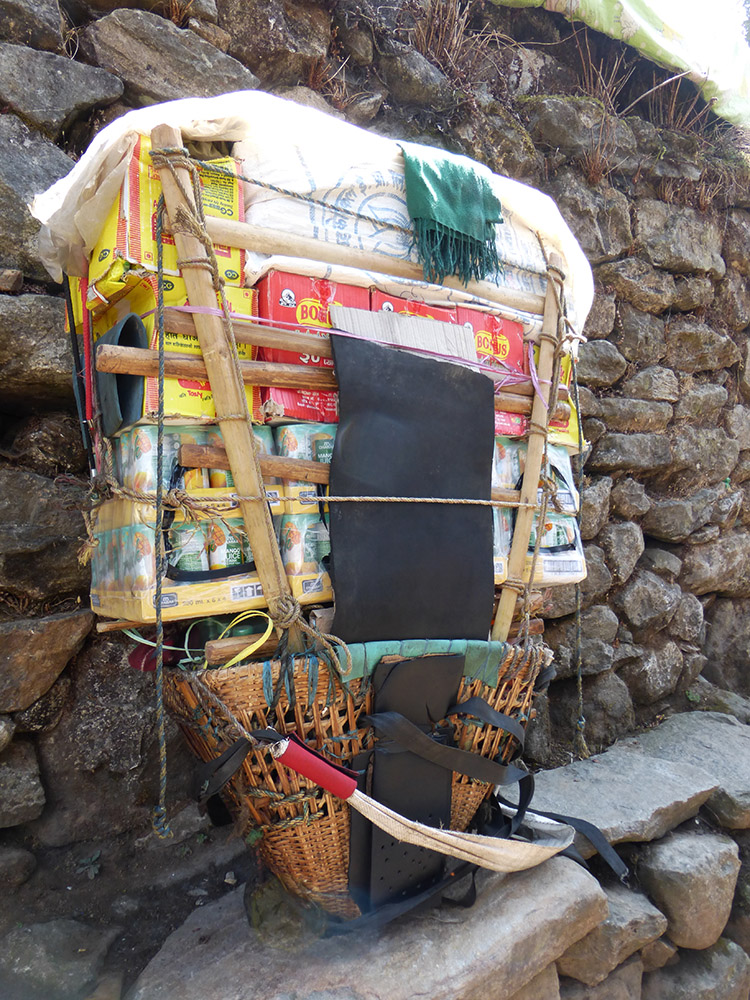 Getting closer to Everest Base Camp, the number of people on the trail increased, however it was far less than I expected and not overwhelming. There were smaller base camps set up at various mountains along the way that are part of acclimatization process for the climbers.

I’m glad I was there during the climbing season, as you could feel the anticipation in the air from the climbers, which I’m sure is heightened as Everest hasn’t been climbed the past two years due to avalanches in 2014 and the earthquake in 2015. The climbers were on their way, the small tent city was under construction and there was some excitement in the air on the Khumbu Glacier. I was surprised to learn, not only how quickly the glacier is retreating and changing, but also that the tents need to be re-positioned every few days due to the movement of the glacier. 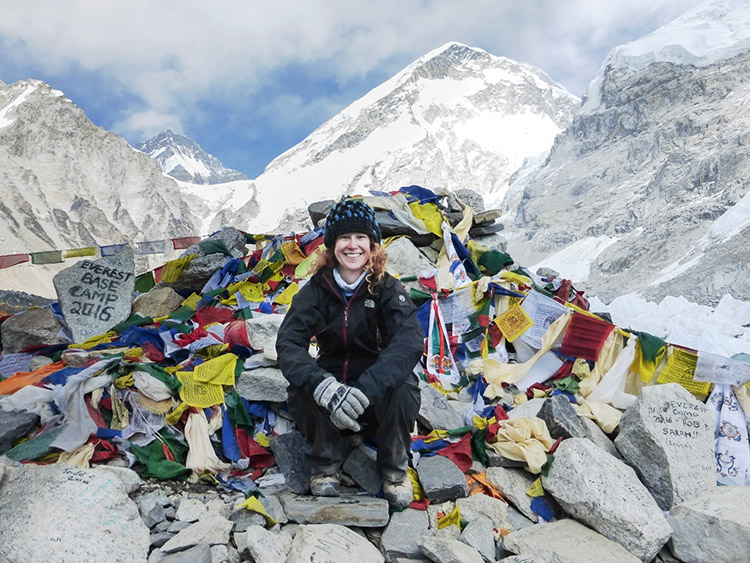 After seeing how the experienced expeditions prepare and live, it was time for me to walk back to Dingboche and along the valley to Island Peak in a snowstorm. The first evening was spent warming up from wind and horizontal snow, relaxing in the tent waiting for it to subside. The following morning the weather was perfect for our climbing clinic. With the direction of our climbing guide, we tested out gear to ensure we were comfortable and understood how to use the jumars, belay ourselves and also learnt how to best position our crampons on the ladders. After our instruction, we were ready to tackle Island Peak the next day. 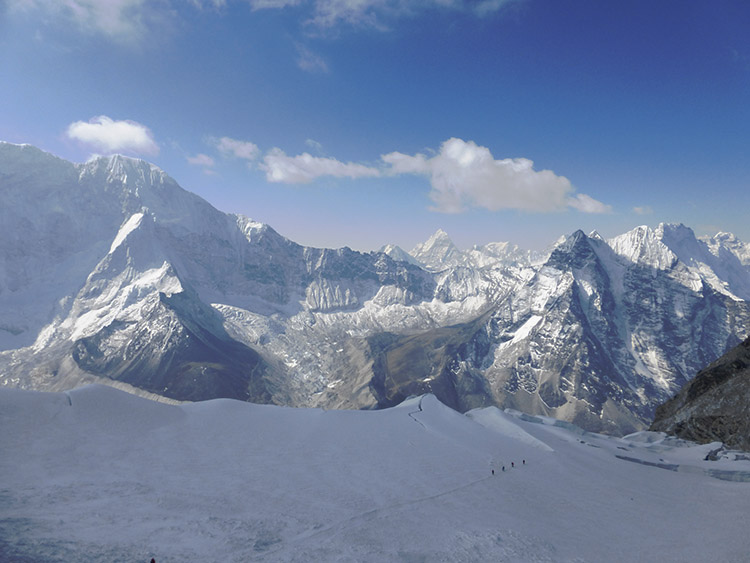