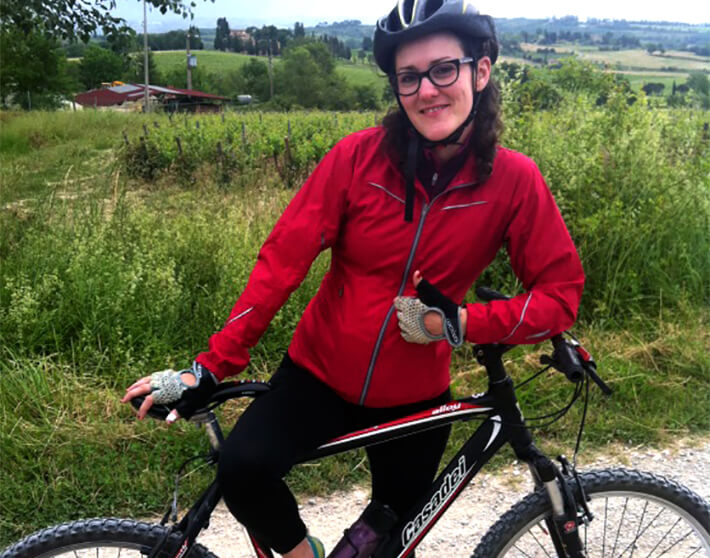 This past May, I embarked on my first cycling trip through the rolling hills of Tuscany. I was intimidated initially because I haven’t been on a bike for almost a year (my bike was stolen, car is so convenient, etc. ) The trip started in Rome where you could spend just one night before heading on the train to Tuscany, but I decided to arrive three days prior and re-acquaint myself with my favorite European city. I went to High School in Rome, so it’s always a treat to revisit my favorite Piazzas, eat gelato at the Trevi Fountain and splurge on an indulgent lunch on a side street trattoria.

Because the members of our 16 person group arrived at all different times, we didn’t get to sit down and meet one another until after we had arrived at the Agriturismo just outside the quaint, Southern Tuscan town of Chianciano Terme (remember in Italian CH sounds like K, and CI sounds like CHI). As we went around the room introducing ourselves, it turned out that almost everyone felt a little intimidated at cycling the notorious Hills of Tuscany! I felt a little bit better about my insecurities after that…and a few glasses of red wine. 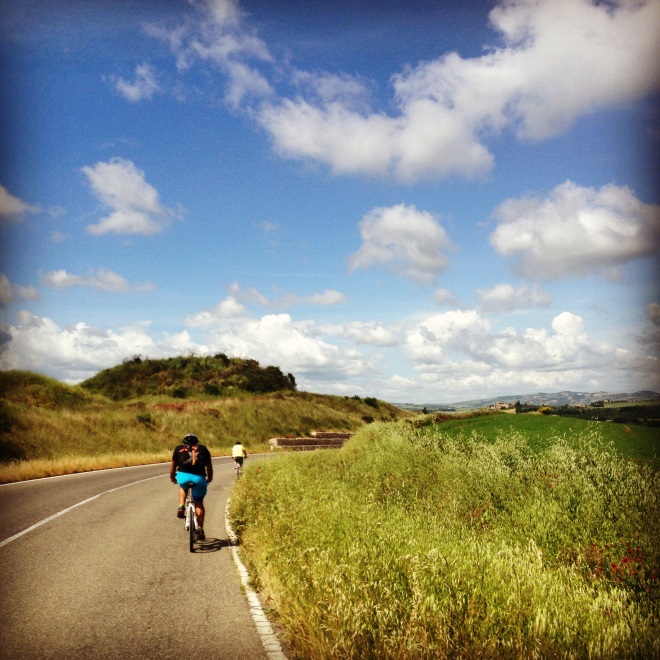 An Agriturismo is a farmhouse that has been converted to what we equate as a Bed and Breakfast style accommodation. The meals served are made from local ingredients; some from the farm itself and others sourced close by. The owner of our agriturismo, Stefano is passionate about local, organic produce and his passion was reflected in the simple, delicious meals he served to us. Every morning there was a spread of meats, boiled eggs, cheese, and fresh baked pastries including my favourite cornetto (basically an Italian croissant) still warm from the oven. There were fresh juices; pear, peach and apple, and of course cappuccino and espresso.

For dinner, we were served four course meals: Antipasto which is usually something small like bruschetta or prosciutto and melon. Primi, a pasta with or without meat. Secondi, a meat dish with two sides normally potatoes and vegetable. Finishing with lovely dessert, strawberry mousse, lemon tart etc. All washed down with the superb house made red wine. Lunches were taken in the town being visited that day. I normally would buy a panino with meat and cheese and to counter act the sleepy effect of the bread, a gelato for dessert. 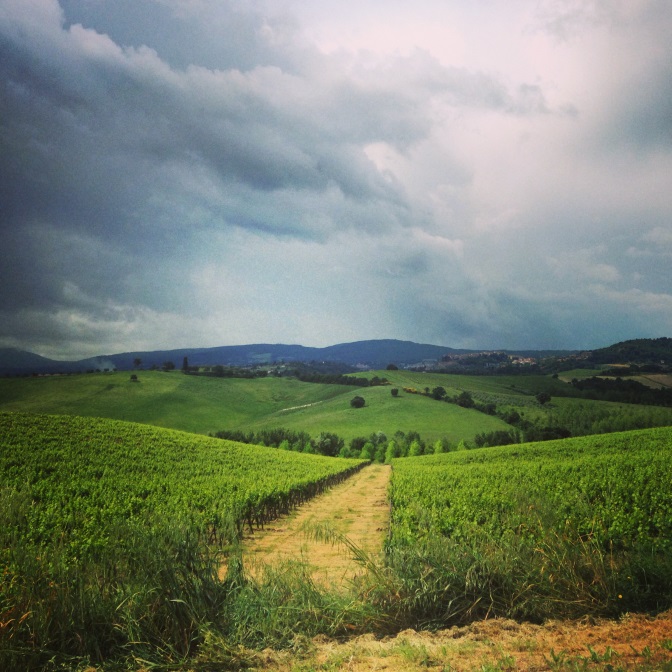 We spent four days cycling in the areas surrounding the agritursimo. I really enjoyed the fact that I only had to unpack once, came back to the same and familiar settings every day but still saw so many different places.

The first day was a rather challenging ride to the Renaissance town of Pienza. The views en route of the Val D’orcia and vineyards dotted with Siena coloured villas were stunning; so quintessentially Tuscany.

The second day we rode to Montepulciano. The second day is also the day where your butt is going scream and ask you “why are you doing this me to again!?”, but shortly thereafter it’ll get over it. We stopped first at a pig farm about 1 km away from the agriturismo where they raise a breed of pig called “cinta” found only in this part of Tuscany. Seeing the farm was inspiring; little piglets running free, mom and baby pigs socializing, outside, in the sun. Ultimately, they were going to be turned into delicious prosciutto, but at least they enjoyed life before being food. The rest of the ride took us through vineyards and farms. It was a little rainy that day so the landscape looked dramatic with beams of light breaking through the clouds. 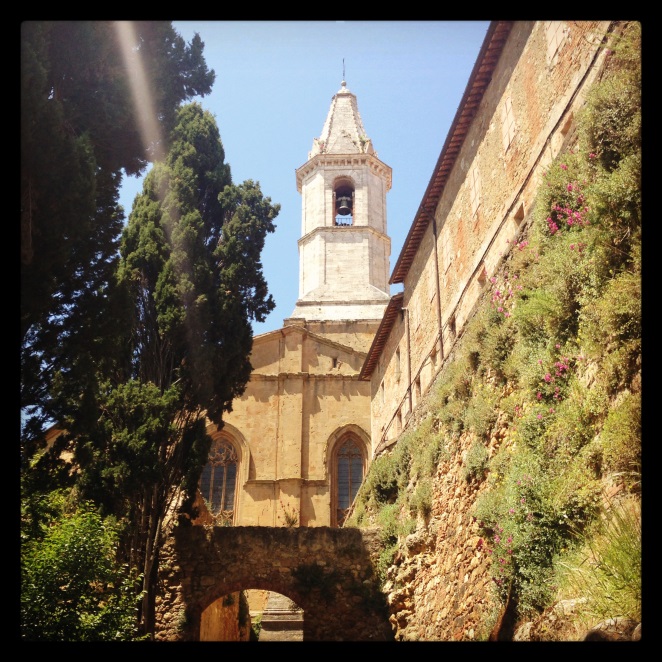 We returned to the agriturismo, freshened up and headed to a wine tasting in town that evening. For me, this was the highlight of the trip. We first tasted olive oil and learned about the different types of oil produced, how the oil is graded and how to taste it. Then out came the bread, cheese and meats to accompany the wines. Most tastings I’ve been to mean you get a one ounce taste of the wine. But here, the whole bottle was available to us! The more bottles that were opened the louder and louder we got, our laughter and voices filling the stone cellar to the ceiling. I walked back to the agriturismo with the sun setting behind me through a vineyard;perfect ending to an amazing day.

On the third day we rode out to the Tuscan Lakes, which was a very welcomed flat ride after two days straight of ups and downs. That being said, as difficult as the up hills are, the down hills are exhilarating! The ride to the lakes featured one of my favorite parts of being in Italy in the Spring: poppies. There were swatches of red in the wheat fields and everyone in the group couldn’t resist jumping in and taking pictures surrounded by poppies! 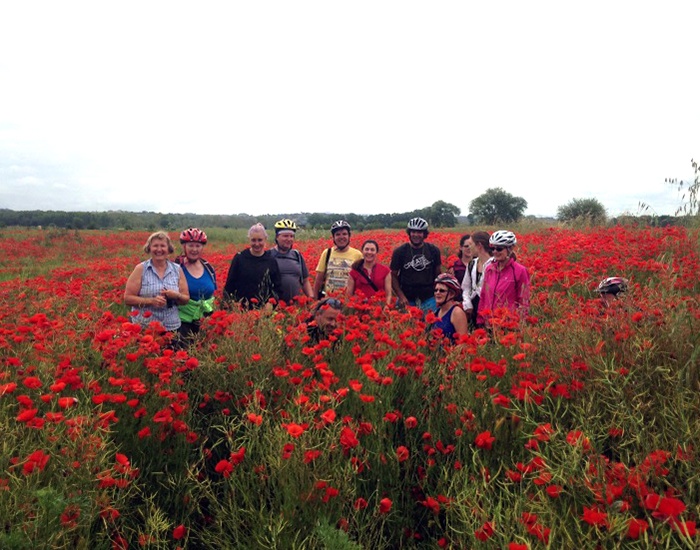 The fourth and final day was the longest, but well balanced in terms of up hills, down hills and flat. We rode to the small spa town of Bagno Vignoni. Many parts of Tuscany feature natural hot springs, but Bagno Vignoni ‘s historical significance sets it apart. There is a rectangular 16th century tank, which contains the original source of water that comes from the underground aquifer of volcanic origins that sits in the center of town. From the tank there is a small canal that drops over a cliff face creating a lukewarm water fall that feeds a turquoise pool at the bottom the hill. Following my guides lead, I tossed off my shirt and jumped under the waterfall, cycling shorts, sports bra and all! It was a soggy ride home but worth it!

This trip was one of my favorites for so many reasons. I loved seeing a side of Italy I hadn’t seen before, after living there for three years and going back to visit twice, I wasn’t sure I could be impressed by a country I already love so much – and I was! Being challenged physically was extremely rewarding and freedom of being on the bike, exploring the back roads, whizzing down the asphalt hills taking the turns as fast as I could – there’s no feeling like it! It’s a great trip weather it’s your first time in Italy or your 5th and you want to be challenged and indulge at the end of the day guilt free! 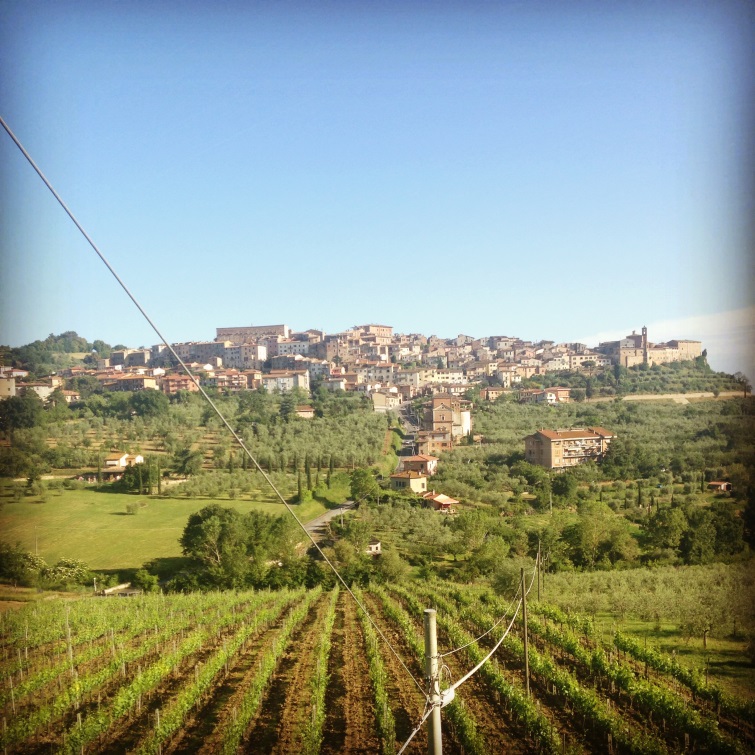