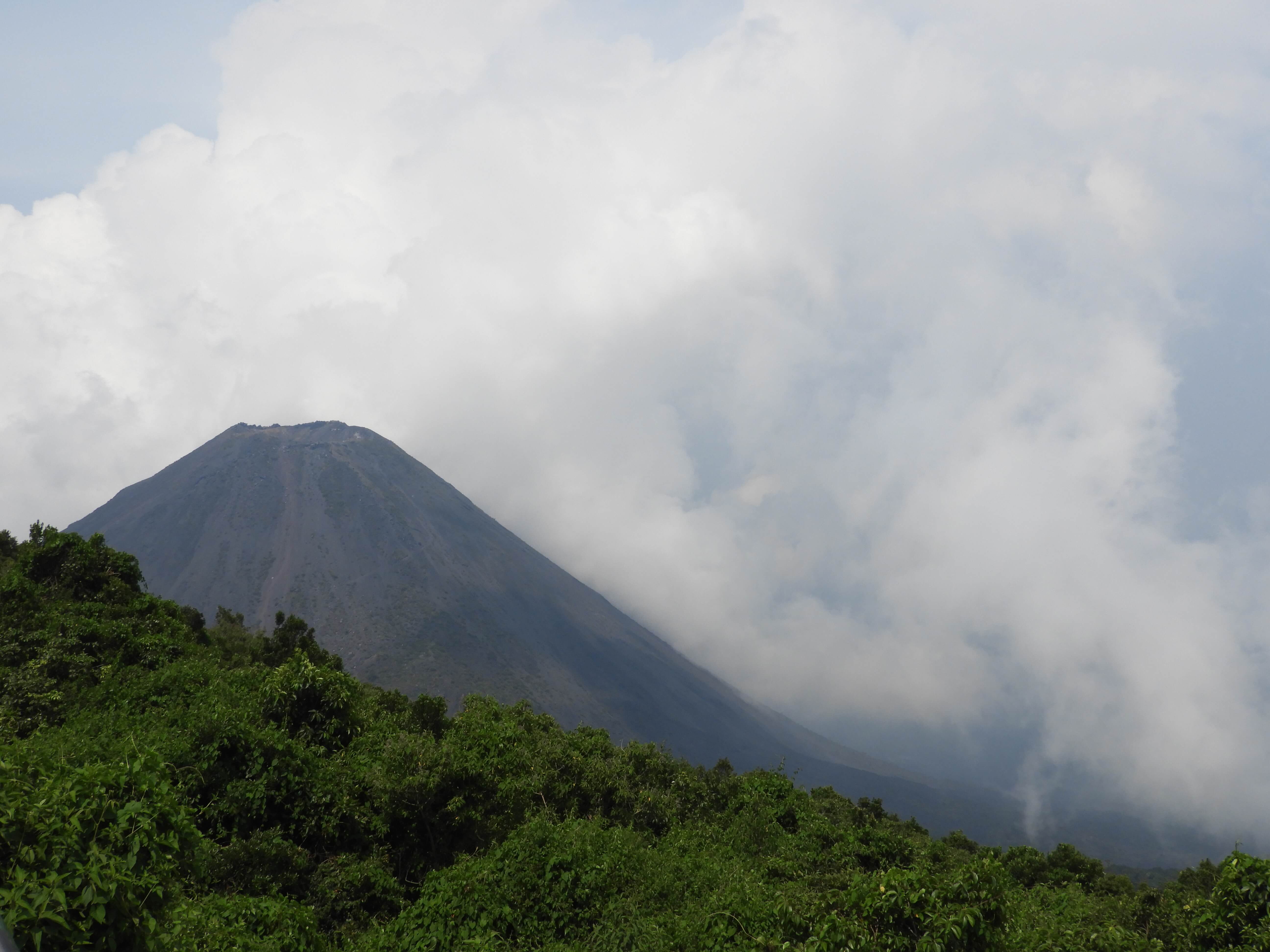 When Googling travelling in El Salvador you get two responses; it’s dangerous don’t go or it’s a hidden gem in Central America. A little research and my interest was piqued. I decided to check out this hidden gem for myself on an extended layover on my way home from Costa Rica. The more research I did, the more I wished I had of been able to spend more than three nights in the country. Of the limited time that I did spend in the country I found that the external image of the country isn’t entirely correct. For me, El Salvador is a country of Volcano’s, vibrant greens, pupusas, colonial towns, churches, tropical fruit, street art and wonderfully warm people.

San Salvador airport is located quite away from the city (45mins in good traffic) surrounded by jungle greens. After paying my entry tax (USD$10), I was surprised at how calm leaving the airport to get a taxi was. Certainly not like any other airport/bus terminal I have experienced in Latin America where everyone is trying to get my fare. My taxi driver wanted to chat the entire ride, but my Spanish can only last about 5mins before silence settled in. As soon as I exited the airport I was surrounded by the jungle with mountains and volcanoes stretching to the horizon on either side. Upon entering the city of San Salvador, I was surprised how much American fast food lined the streets. The city has very few road signs which resulted in my taxi driver getting lost and needing to call for directions. I had two full days to pack in as much as I possibly could.

Up until two days before my arrival into El Salvador I had been debating whether to spend my first full day taking a free walking tour of San Salvador and seeing what the city had to offer or climbing Volcan Santa Ana (2,381m), an active volcano and the country’s highest. Although initially booking in on the free walking tour I made a last-minute switch to climb Volcan Santa Ana instead, and I was glad it did! The volcano last erupted in 2005 forcing some of the villages to be moved, however it only threw rocks and ash out rather than streams of lava. Although there is a very well-maintained path, visitors are currently only able to ascend in a group at 11am with a guide and armed police escort. There hasn’t been any trouble in the area, however the police and military are everywhere to protect and provide safety. I was told if police or the military can be seen it means you are in a peaceful and safe part of the country.

The heat, humidity and lack of recent trekking made the hike a little more challenging than I would have liked it. It’s a 6km trek each way, taking an average of 4-5 hours in total to summit and descend. May is the start of the wet season which brought hazy skies for me. On a good day I was told you can see to the Pacific Ocean which is approximately 100km away. For me, it was mainly clouds and a whole lot of imagination. Just before reaching the crater rim the sulphur smell became quite noticeable, but nowhere near as strong as other volcano’s that I have been on.

Santa Ana is famous for not just being the tallest volcano, but for having a crater lake that is an incredible shade of green due to the high sulphur content. This green was unlike any colour that I had previously seen in a lake of any kind. Looking closely into the crater I could see the lake bubbling away on one side, while the other side is said to only be 30-40c. It is not possible for the public to hike into the crater, however volcanologists descend into the crater every three months to take readings and learn a little more of the activity of this volcano.

Arriving back into San Salvador it was time I tried the country’s traditional dish of pupusas. Pupusas are thick corn tortillas stuffed with savoury fillings, generally consisting of a combination of cheese, meat and beans. Luckily, I had a pupuseria only a minutes’ walk away. I had been advised to try pupusa revueltas which included meat, beans and cheese and they were delicious! Made to order, very hot and a meal I would happily eat on a regular basis. The best part, dinner including a drink only cost me US$2.10!

My second full day I hired a guide to see La Ruta de Las Flores in the western region of the country and one of the main coffee producing areas. It turned out that my guide (Edwin) had previously lived in Toronto and when he moved back to El Salvador he decided to start a company to show people the beauty of the country. Edwin was easy to chat to and was happy to talk about any topic – the good and bad sides to El Salvador and its history.

Nahuizalco was the first stop of the day, starting with a mural that explains the history of El Salvador, from the Nahuatl until more modern times. In Nahuizalco there are still people that descend directly from Nahualtl and this can easily be seen in their dress and stature. I certainly felt very tall during my visit! Arriving into the main square I was given a very quick El Salvadoran history lesson from the invasion of the Spanish, independence, volcanic eruptions, civil war until the present day. It was also revealed to me that the church was designed by a ship builder and it’s interior really looks like a boat turn upside-down, complete with port holes for windows.

A walk through the market revealed displays of beautiful fruit, vegetables and, surprisingly, racks of meat with no flies in sight. We stopped to purchase alguashte – a powder made from ground pepita seeds with some other spices added before proceeding to a fruit vendor. The lady cut up a green mango and added alguashte, salt and hot sauce into the bag. It was delicious; however, I prefer my mangos sweet and just as they are.

Juayúa was the next stop on the route. I certainly wasn’t expecting to be put into a tuk-tuk as soon as we arrived into the main square. With three of us squeezed into the seat we were hurtled off down a rough and dusty road to reach Chorros de la Calera, a nature preserve containing seven waterfalls. The water was incredibly clear and cool making this spot the perfect swimming hole for many locals. Every weekend Juayúa becomes a food festival with food vendors lining the street surrounding the main square. Some of the best BBQ chicken I’ve eaten was on the menu for lunch served with rice, beans, tortillas, tomato, avocado, salsa, salad and pasta. Certainly, more than enough to feed a few people all for just USD$3.

Concepcion de Ataco, at the foothills of the coffee growing region, was the third and last major town that I would visit for the day. In 2004 the town entered a government competition where the residents made over the city which resulted in nearly every building being painted, covered in art and murals. I happened to be in Ataco just after Ascension Day where the churches were still proceeding with the traditional ceremony and procession through the streets. Ataco was very peaceful to walk around, visit some artisans, enjoy the backdrop of the mountains covered in coffee farms and admire the colourful murals throughout.

Of course, no trip to the coffee region on El Salvador would be complete without a visit and taste test at a farm. We stopped at Café Entre Nubes to try some of their Pacamara blend which is said to have notes of chocolate in the aftertaste, for me it just tasted like coffee. The café is a beautifully set up in a garden full of various flowering plants, including dangling from the ceiling. The coffee that is grown at this farm, like so many others in El Salvador, remains in the country and is not available for export.

Ending my day back in El Salvador, although not at all hungry, I headed back to the pupuseria for one last meal of the tortilla delights and trying the loroco. Loroco is an edible flower that is commonly grown and used in the country. It’s a flavour that is very difficult to describe and one that any visitor to El Salvador must try!

Things and Places to See and Visit Next Time!

When I return to El Salvador I look forward to visiting the town of Suchitoto, seeing what San Salvador has to offer, pre-Colombian and Mayan ruins including Joya de Ceren (the Pompeii of the Americas), the Pacific coast beaches, and of course climbing more volcanoes and eating my weight in pupusas!

I hope you enjoyed reading about my short time in El Salvador! If you enjoyed it and haven’t already, read about my experience in Costa Rica, please have a read!