Ecuador is so much more than the Galapagos! 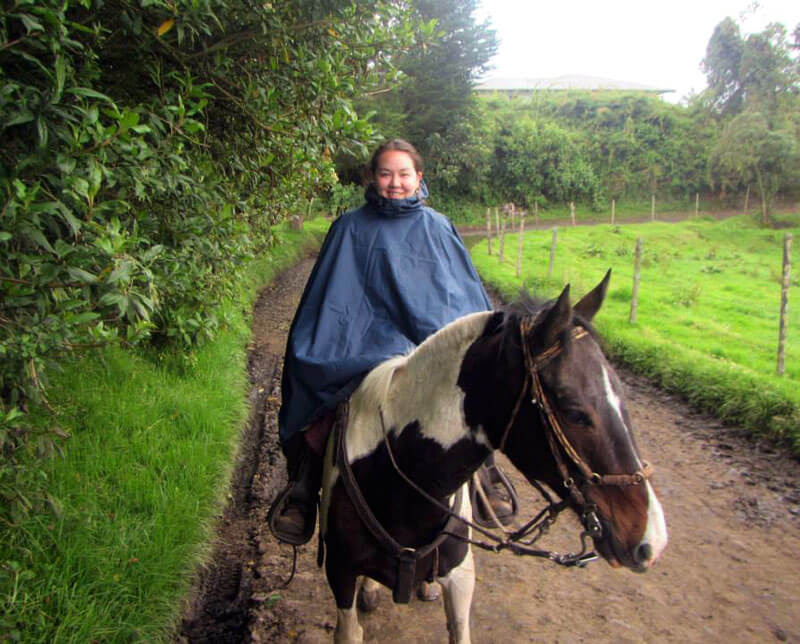 I was lucky enough to visit Quito and the surrounding area when we took a tourist train from Quito to Machachi—a market town a few hours south of Quito. While on the train we saw Gauchos on their horses traversing the countryside. I was immediately jealous that they were out there and I was on a train. Exploring the old colonial city and sampling the amazing food just cemented the idea in my head that I had to return at some point. 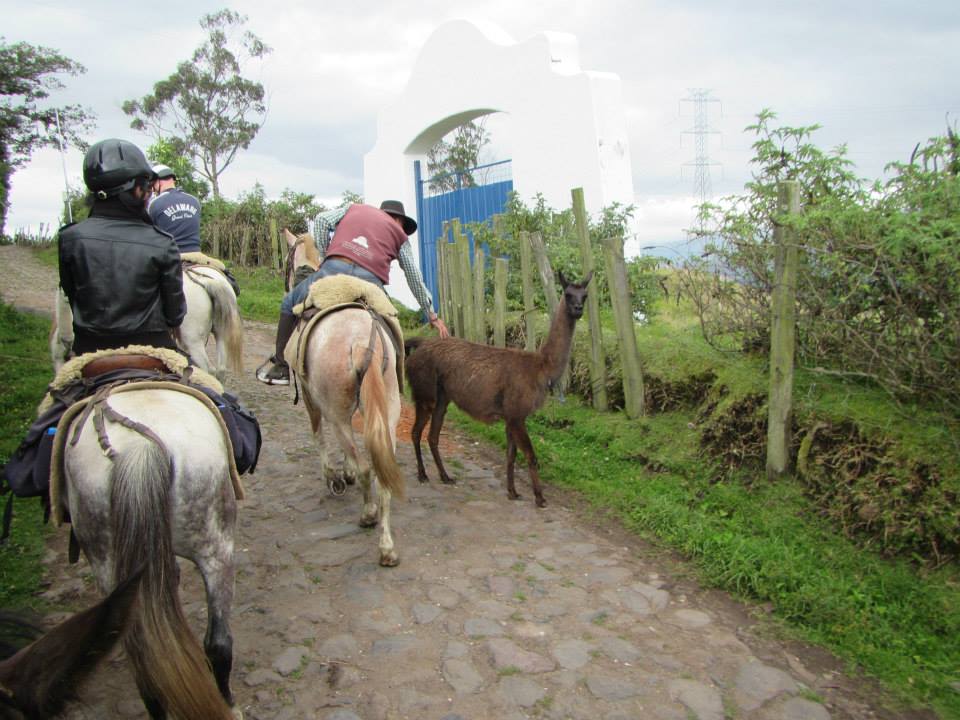 The opportunity came sooner than expected and I found myself on a Copa flight to Quito in March! My main reason for heading back to Ecuador was to visit the infamous Galapagos Islands, but I couldn’t shake the image of those Gauchos in the Andes, so I set out to find a place to ride. 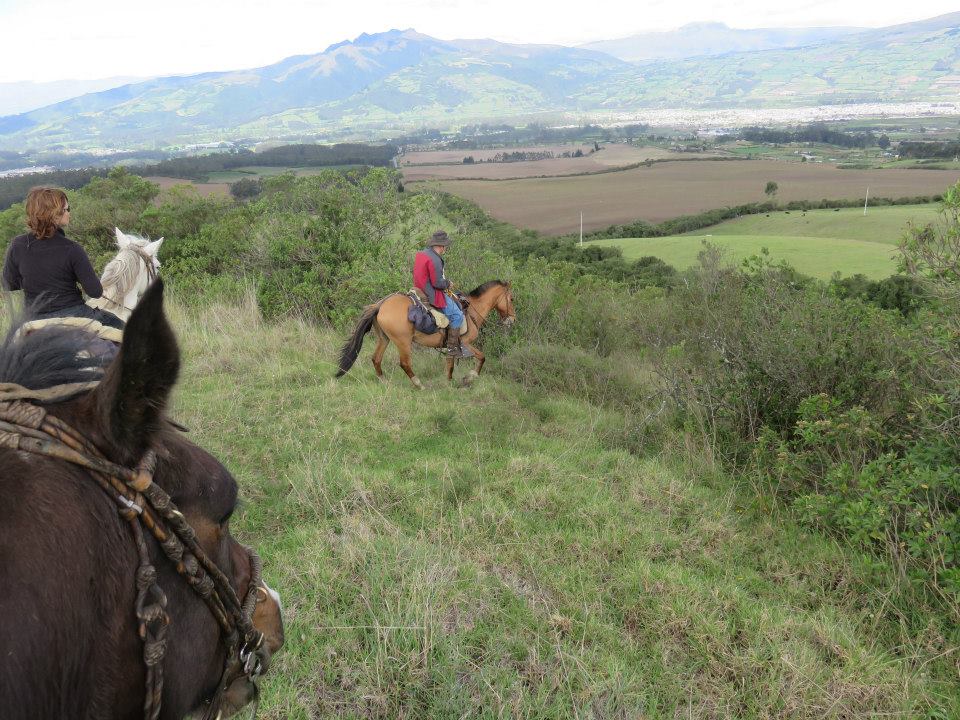 I did some intensive research and decided that the Avenue of the Volcanoes as a perfect spot for me to spend a few nights. It is only about an hour south of Quito, but far enough into the countryside to feel completely authentic. The scenery didn’t hamper my decision either. 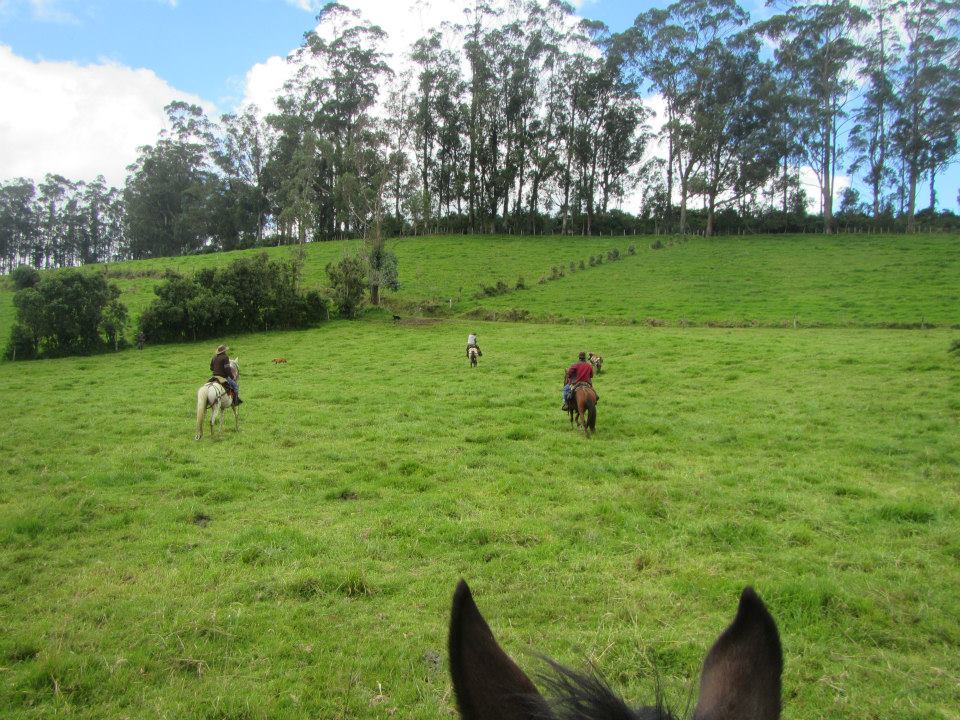 Gabriel at Hacienda La Alegria was my host and riding partner in the Andes. The hacienda has been in his family for 102 years and is still a working dairy farm. It is surrounded by rolling hills, wild roses and tons of locally owned and operated farms. They have quite a large herd of horses, and after some discussion about my preference in horses, he was able to find me a perfectly matched mount. Comanche was my partner in crime as we rode through neighbouring farms and up into the foothills of the Volcanoes. On my first day at the hacienda we ended up retrieving a wayward cow from an adjacent farm. It brought me back to my cow chasing days in Australia; a good cow horse is too much fun! 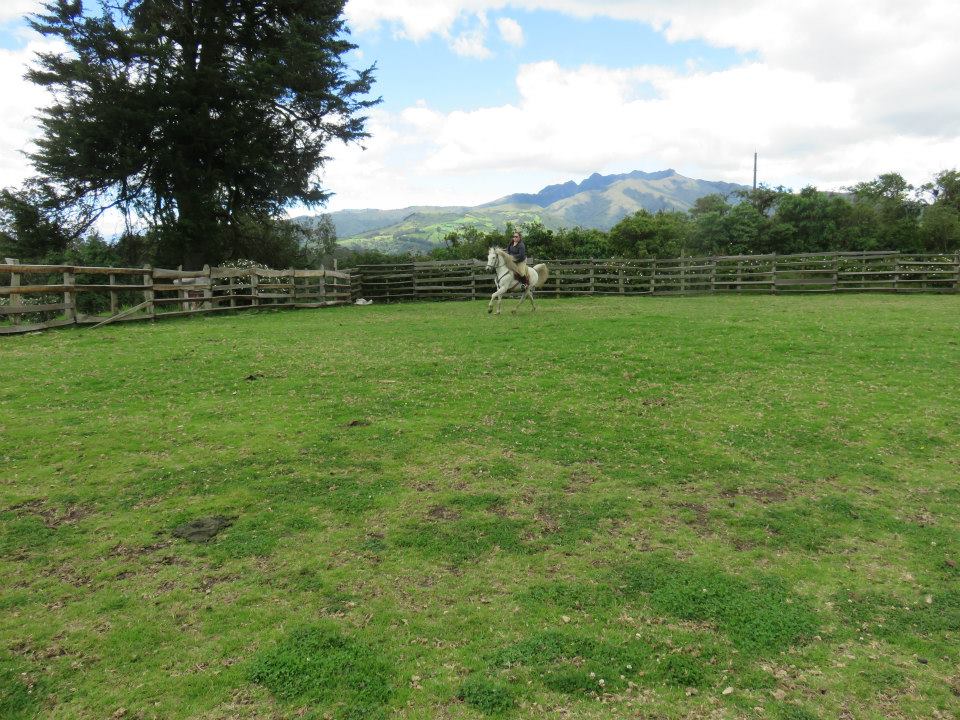 I was treated to some amazing Ecuadorian food as well as some delicious Argentinian wine and ice cold beer after my long days in the saddle. Dinner was always served in the main part of the house, and by the time I got back to my room someone had started a fire in the fireplace to keep the chill at bay. My room faced a lush lawn with the volcanoes in the background—a pretty spectacular view to wake up to. 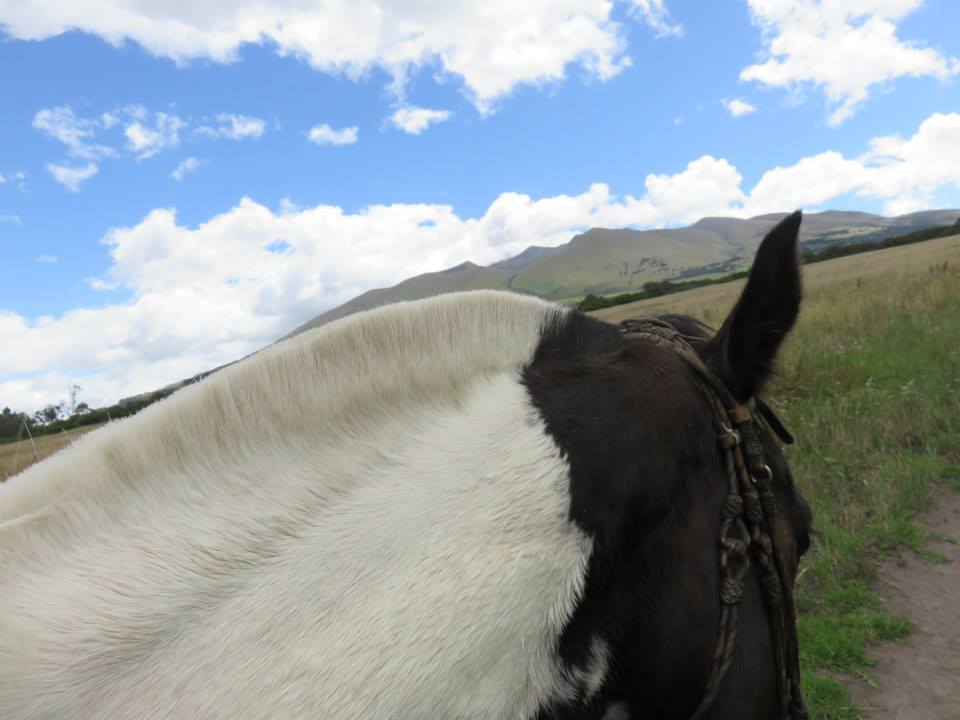 My stay at the hacienda was not long enough, and after two short days it was time to head into Quito to meet the group that would be my shipmates on G Adventures’ Estrella Del Mar. We had the customary welcome meeting and headed out to my favourite restaurant in Quito—La Gloria. Turns out they are closed on Sundays, so we got to know each other over some sushi. Our flight to San Cristóbal departed early the next day so we all called it a night shortly after the last piece of maki was eaten. 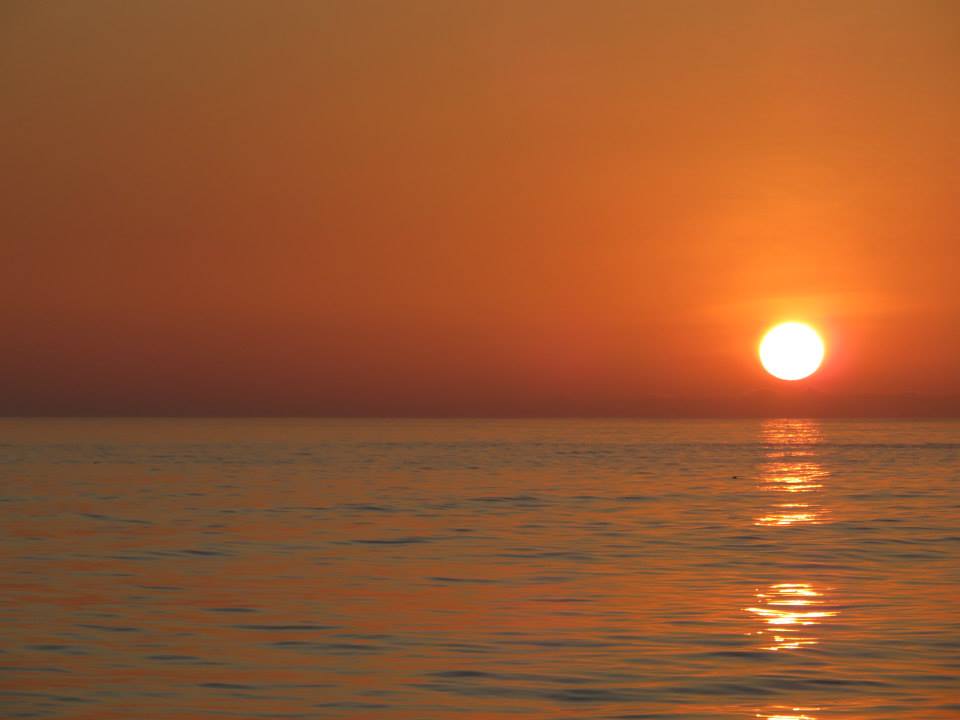 The Estrella is G’s newest and smallest boat. It was refurbished in 2014 and is comfortable but not luxurious. Like many of the other boats in the G fleet, there was room for 16 passengers, the crew of 7 and our naturalist guide, Pedro, on board. The level of service our crew offered meant that everything from chasing dolphins in the bay, to making two separate birthday desserts was not out of the question. 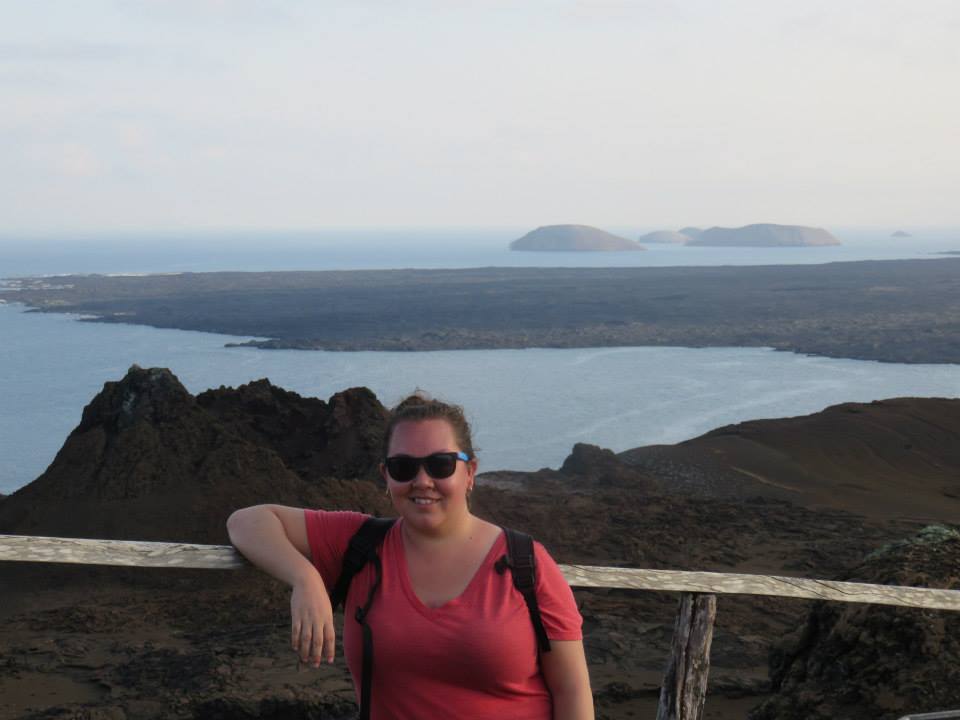 Being on a smaller boat meant that the whole group was able to hike, snorkel, eat and lounge together. It also allowed us to get closer to the islands. We, of course, used pangas to get to shore and to snorkel from, but it was lovely to be able to see the islands from our yacht. 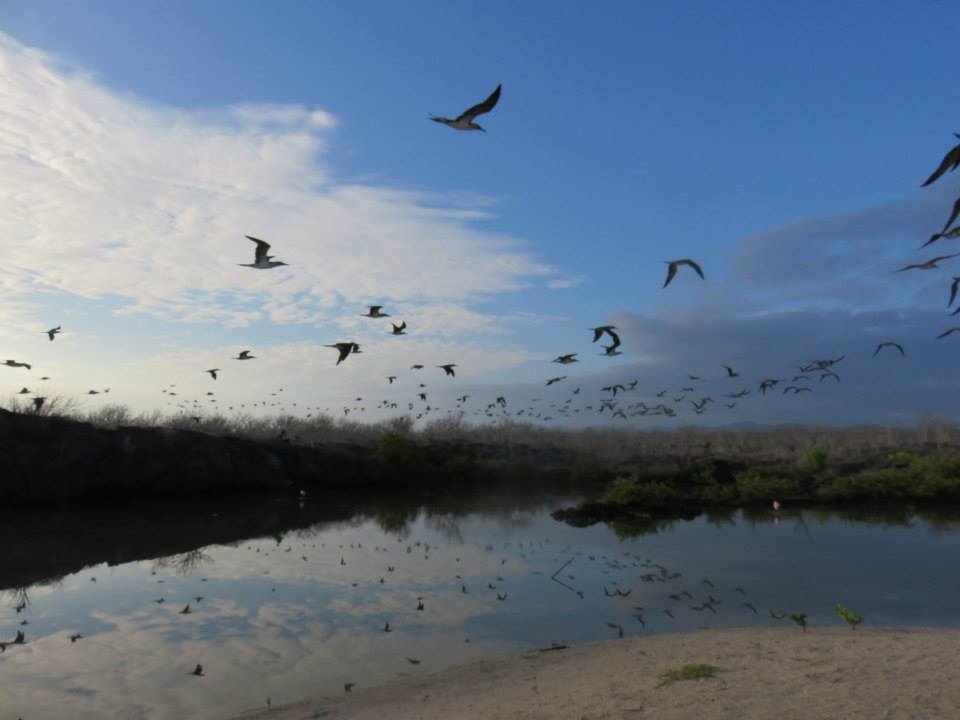 About three quarters of us were on a 10 day itinerary (7 nights on the boat), and the remaining passengers were on the 7 day (4 nights on the boat). Half way through, the 7 day itinerary passengers disembarked the Estrella and new passengers embarked. We visited a total of 8 islands in the North, Central and South region of the archipelago. Most days we would have two hikes and two snorkel sessions with downtime on the boat in between. The hiking was never overly strenuous but snorkeling against the current might be a bit daunting for those who are not strong swimmers. 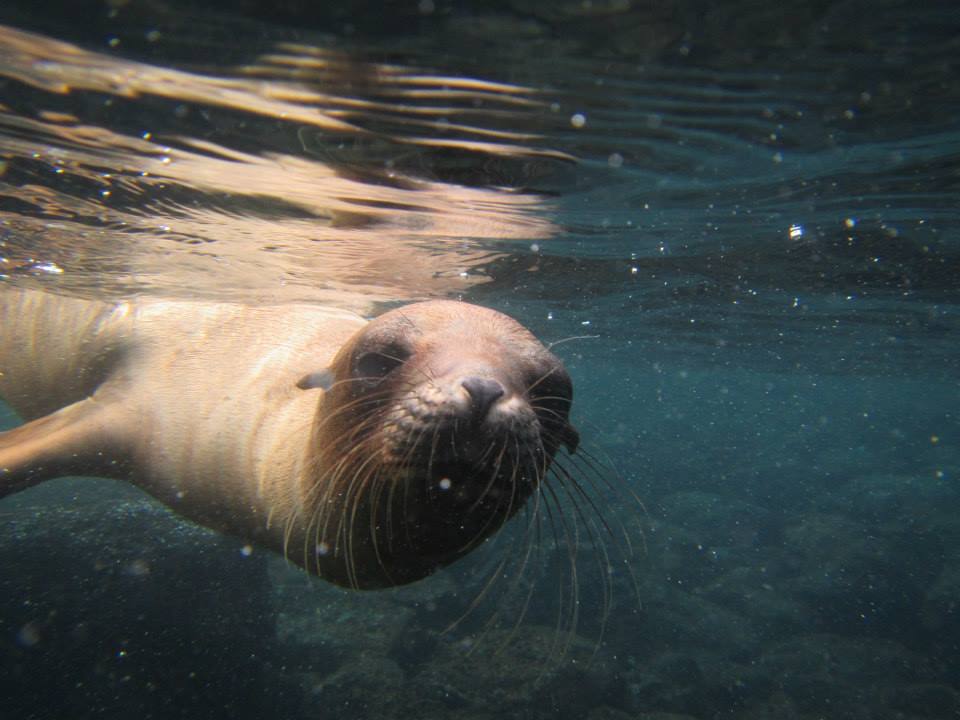 March is generally considered one of the best months for snorkeling in the Galapagos because the visibility is quite good and the water is relatively warm. I wore a 3mm full wetsuit and was perfectly comfortable. Three major currents converge in the Galapagos making the waters nutrient rich and densely populated with aquatic life. This also means that although the visibility is good by Galapagos standards, it is not nearly as clear as one might expect after having been in the Red Sea, or parts of the Indian Ocean. The currents and visibility didn’t stop us from seeing an astounding array of wildlife in the water. We swam with sea lions, hammerhead sharks, dolphins, turtles, penguins and rays to name a few. I am an avid diver and was quite disappointed to learn I would not have enough time to dive, but the snorkeling was fantastic! There are some great live aboard dive operators in the Galapagos which just means I will have to make a second trip to the islands. 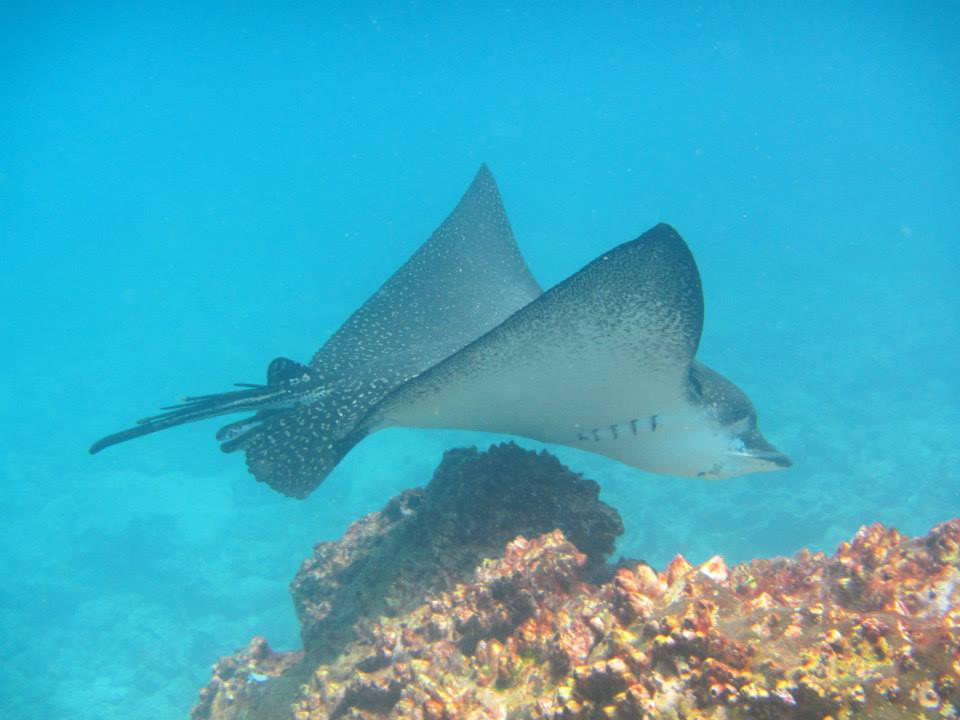 Although my interest was mostly in the underwater happenings of the archipelago, many people came to see the flora and fauna on terra firma. Many people assume that the islands will be lush with greenery, but many of them are quite barren due to their volcanic origins. A huge draw for everyone coming to the Galapagos is the endemic nature of many of the animals. The residents of each island were perfectly suited for the climate in which they lived. They are also completely unfazed by our presence which was great for photo ops! At times we had to walk over sea lions and giant multicoloured marine iguanas lying on the foot path. There were Magnificent Frigatebirds nesting within an arm’s reach making the males’ unusual red throated mating dance easy to observe. We saw four of the six types of boobies and their fluffy chicks. Spotting the Short-eared owls on Genovesa were pretty much the only animals that were hard to spot. Their mottled feathers blended perfectly into the lava fields in which live and hunt. The animal encounters were numerous and intimate, something that might be unique to this UNESCO World Heritage Site. 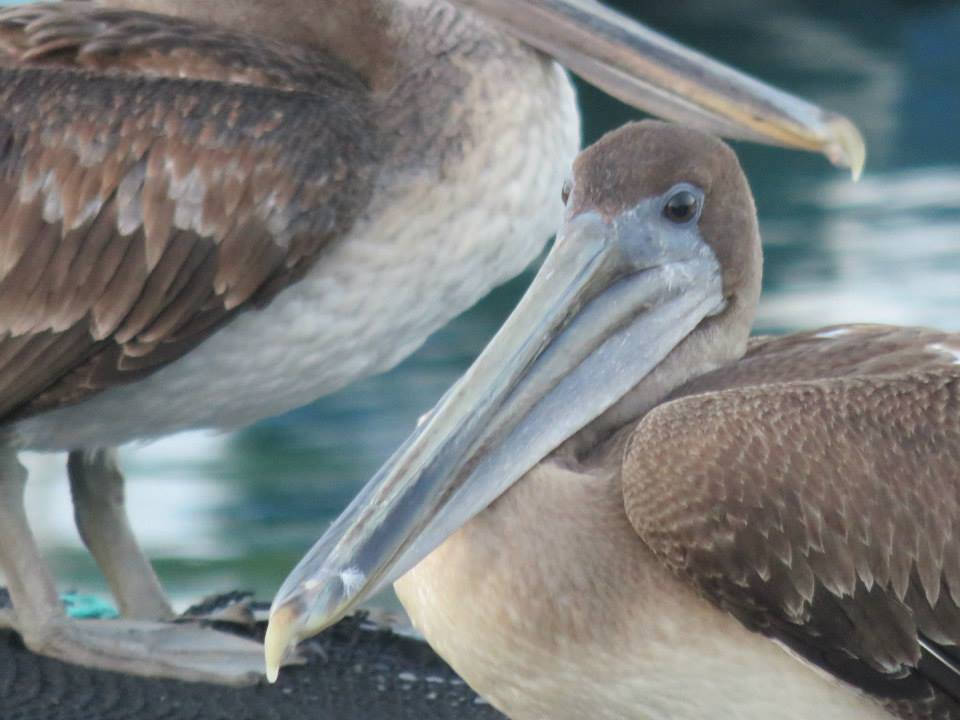 Cities have never interested me much. If I am to spend time in the city, it helps to have beautiful colonial architecture to look at; the historical centre of Quito more than takes care of this requirement. I am happiest on the water, in the mountains or in the desert. Ecuador and the Galapagos offer all the outdoor activity anyone could wish for, but also has a rich culture and interesting history. Many people arrive in Ecuador and head straight for the Galapagos, however the mainland has so many interesting things to experience. For such a small country, Ecuador really has a ton to offer: The Andes, a cloud forest, colonial cities, great food, a vibrant art scene…the list really goes on. Instead of heading straight to the islands, consider checking out the little gem of a country for a few days first.