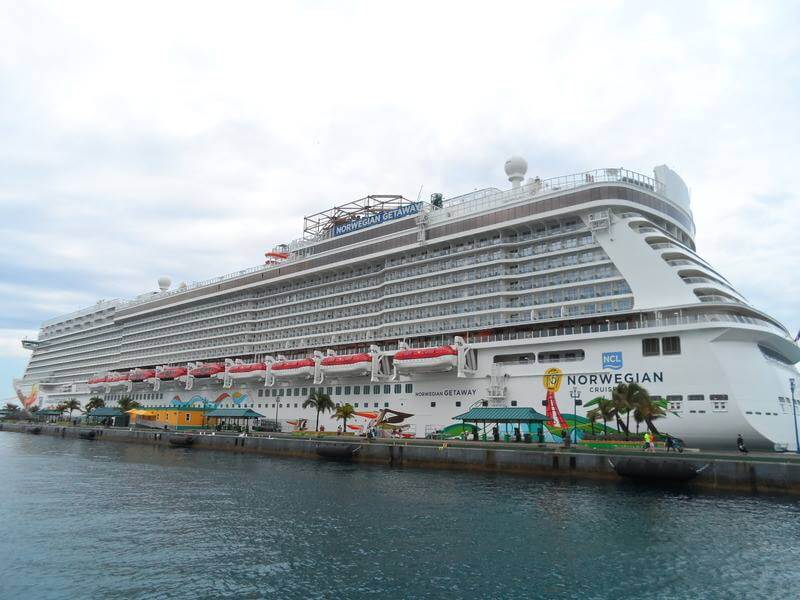 Arrived at the cruise ship without any trouble, I met my mother there who had travelled from Fort Lauderdale. I was amazed at the overall size of the ship and how many people I would be travelling with for the next 7 days. The balcony suite was amazing, I really enjoyed having a balcony to take in the views, and we had some wine to start off our vacation. That night my mom and I met with the other Merit Travel cruisers for supper at Teppanyaki. This restaurant is all about the communal atmosphere where you witness skilled chefs slice and dice the food right in front of your eyes. It was great meeting the Norwegian Cruise line hosts here as well. 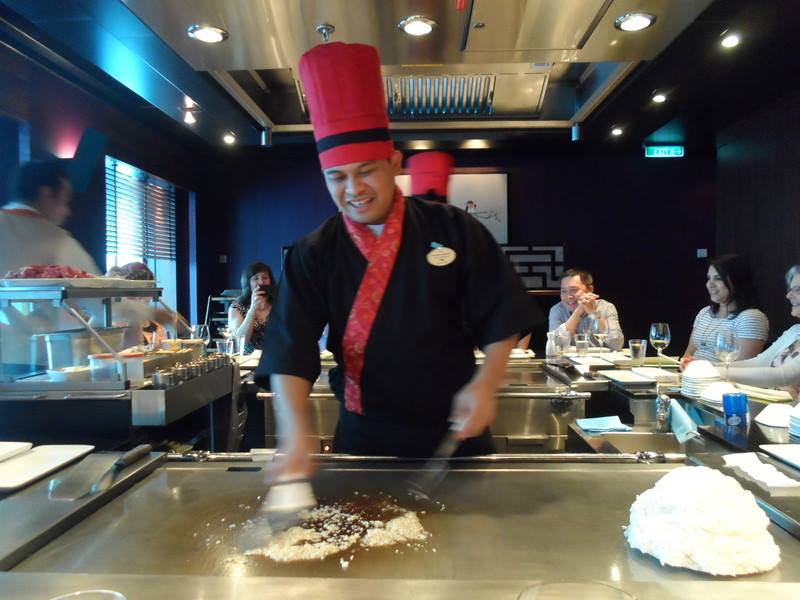 We started the day off at a seminar to learn all about how great Norwegian Cruise line is, and their different itineraries and ships. We watched a videotape from the ship to Pharrell’s ‘Happy’ and that was definitely the song of the cruise that week; it played many times throughout the sailing. We decided we would enjoy the ship and see all that it has to offer.

Being an avid (albeit newbie) rock-climber, I went rock climbing a few times on the wall. With the other girls I went down the big freefall waterslides over and over again. Now this waterslide you walk into at the top, a clear door closes around you, you wait for a countdown and then the platform you are standing on drops out from beneath you. From there, gravity takes over until you loop around and land at the bottom. The scariest part is the waiting and the countdown! But highly recommended!

For dinner we ate at the Brazilian Steakhouse. This is a restaurant in which you have a marker for each person that says ‘yes please keep coming’ or ‘no I’m finished’. They come along with skewers of different kinds of meat, come along and cut it table side right onto your plate. Being somewhat of a meat connoisseur this is my type of restaurant. My first experience with a restaurant like this was Carnivore in Kenya with lots of exotic meats, but having just experienced a steakhouse in Mexico I knew to ask for Picanha. Picanha is a Brazilian cut of meat in which the fat is not removed until the steak has been cooked. It is delicious, you have to try it!

After dinner it was time to go to one of the shows on the ship. We went to see ‘Burn the Floor’ which is a Latin inspired dance show. It was truly amazing. The dancers are so very talented. Throughout the week the dancers can be found on the ship performing at dinners and giving dance classes

That night was a dance party at the H20 outdoor bar on the top deck. There was lots of oldies, 90s, new music, salsa inspired music, etc., and I danced until I was literally one of the last 2 people on the dance floor. 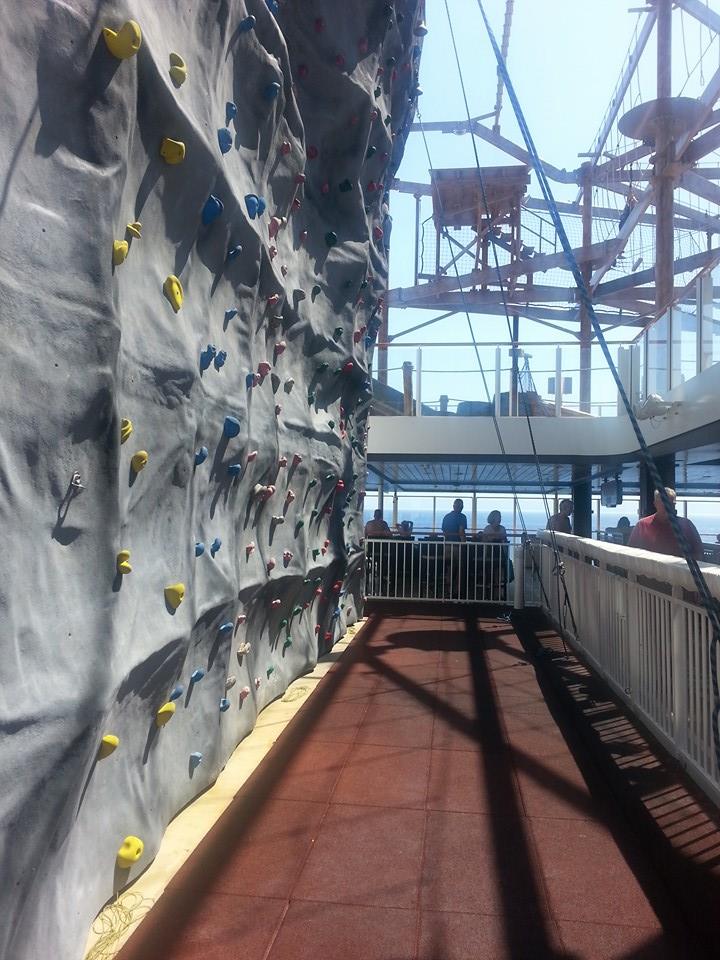 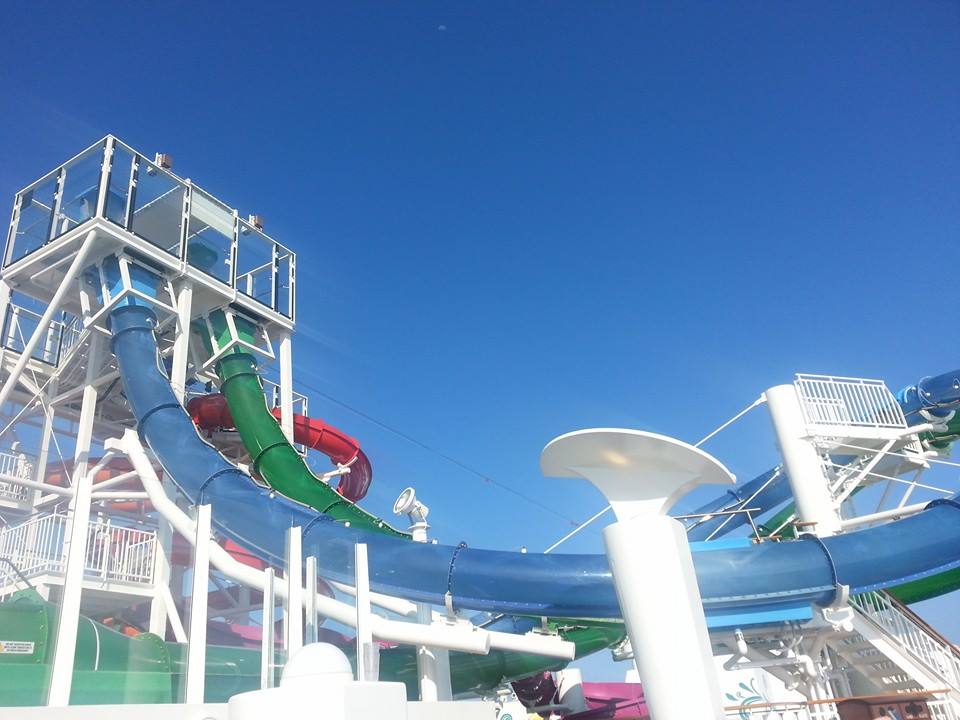 Today we were at sea as well. There was a cruise seminar but it was in the afternoon so we had time to relax in the morning. We enjoyed the sundeck on one of the top decks, the waterslides and the rope courses. The ‘plank’ which is a small wooden plank that you walk out over the ocean was closed as it was too windy. I could have lived on those rope courses, I thought it was so fun. I guess it’s different if you’re afraid of heights.

This evening we all got together to go to the Svedka/ Inniskillin Icebar. This is a bar that is kept at 17 degrees Fahrenheit, or -8 Celsius with three dimensional ice tables and chair. Being Canadians we were joking that it was about the temperature of Winnipeg in the summer time! You are given a parka to wear and there is many yummy specialty drinks there. Even though we are Canadians normally when you’re in that temperature you are not in sandals and it made the toes quite chilly! After the Icebar my mom and I enjoyed a drink with some of our hosts at the Sunset bar on the Waterfront of the ship. That night we ate at Taste, one of the included restaurants onboard. 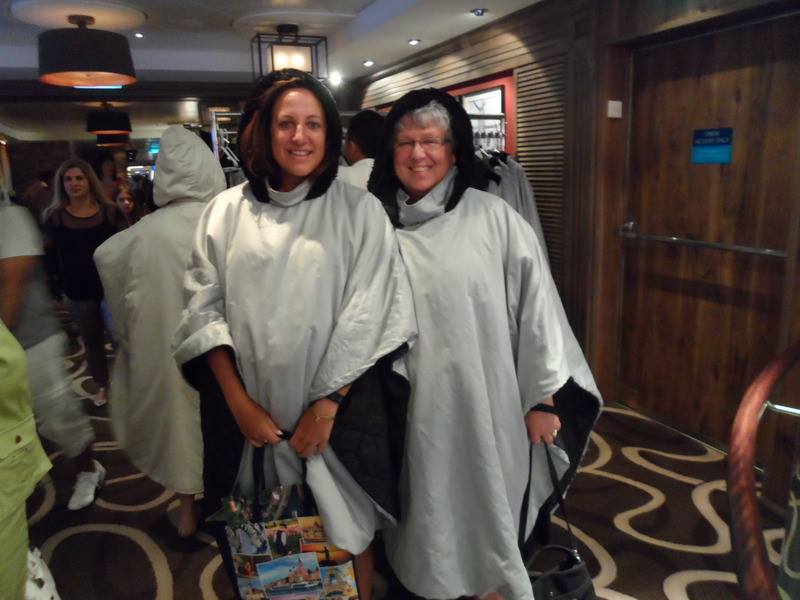 We’ve hit land! Today we docked at St. Thomas of the US Virgin Islands. I was itching to get off the boat and into the water so I had prebooked an excursion entitled ‘Kayak, Hike and Snorkel St. Thomas’. It was an early start to the day, and I met up with the 14 other people on the excursion outside the boat and we took a bus about 20 minutes into the island. I was very happy that it worked out that I had my own single kayak. It was kayaking through the bay and by mangroves.

We stopped for a short hike and learned about some dangerous trees such as the ‘Caribbean death apple tree’ which is fatal to touch, to burn, to really have any contact with at all. We had stopped at a hermit crab village, and if you stop and look you will see hundreds of these crabs running about. We even took part in a hermit crab race, it was very fun.

Snorkeling was near mangroves and over lots of fish. Then I looked down a few feet and there was a shark! It was very rounded in the front and by the fin I thought it had to be a shark, and it was! It was a lemon shark. That was quite the experience!

After the excursion, I went up the gondola to a restaurant high up a mountain with spectacular views of the port of St Thomas.
That night my mom and I went to see the ‘Dueling Pianos’ which my mother was very excited about. There are two pianos and a drum set and you request songs throughout the night. My mother of course went to hear Elton John, but because of the nature of their show it’s never the same from night to night. 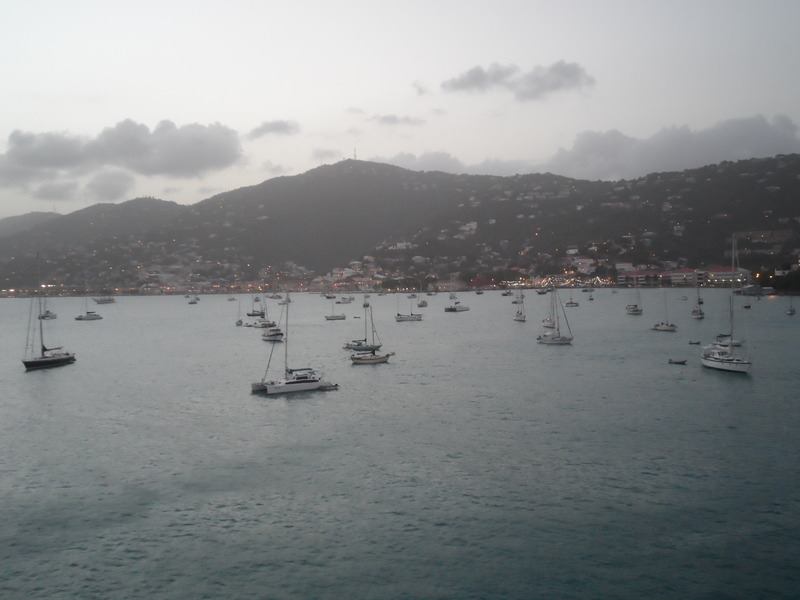 This is another port stop day! We landed at Tortola, British Virgin Islands. My mother and I opted for an excursion entitled the ‘Tortola Party tour’. It was actually great, we were taken by bus around the island, while passing around a bottle of rum and drinking rum punch. We were taken to a beautiful beach that did not have many people on it, and were given a very tasty Caribbean lunch. We also stopped at a more touristy beach where my mom and I enjoyed each a coconut.

That night on the ship my mom and I partook in some comedy which was quite hilarious as the comedian was talking about marriage, his wife, and her adventures in heels and spanx. After comedy there was ‘Dancing with the stars’ in which members of the cruise staff did some dancing with fellow cruisers to win a prize. The dancing they did was hilarious and very over the top. This night was a very comedic night all in all. 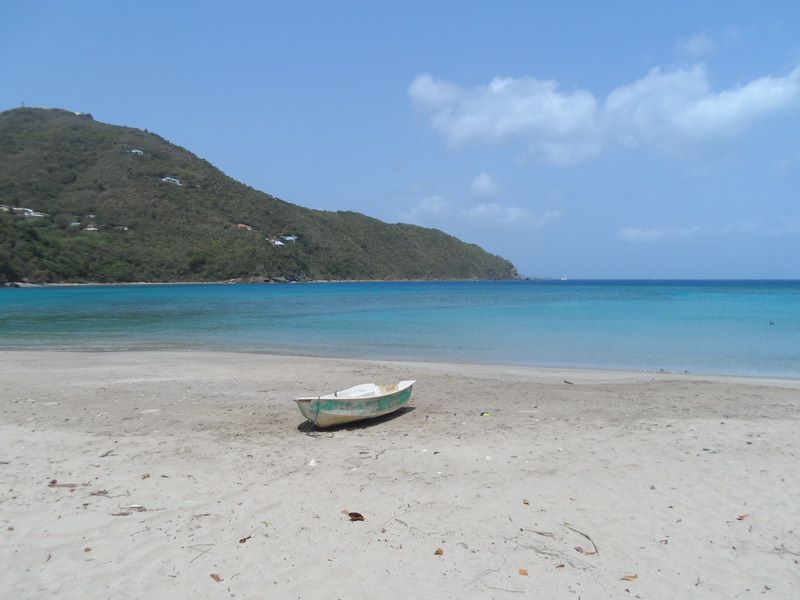 Another day at sea to play around the ship. This day I took the National Accounts Manager of AMA Waterways Morgane and my mom down the freefall waterslides. My mom went on it no problem and Morgane went down as well, but I’ll always remember the look of horror on her face as the door closed on her. She was trying to scratch her way out of the slides but then the platform drops and gravity takes over. I did the rope course and was the only one to walk the plank over the ocean.

In the evening our lovely Norwegian Cruise lines hosts had one final cocktail party for us at the Flamingo bar and grill. It was nice to have everyone together for this. Then most of us headed to the Legally Blonde Broadway show that night. 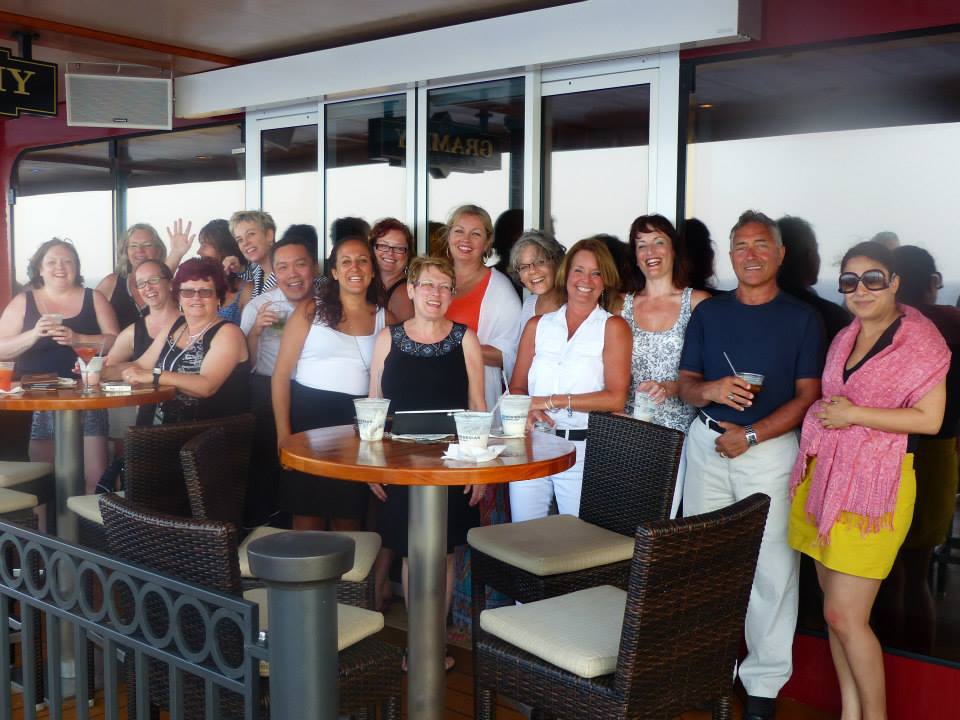 Our last port! The weather was not really cooperating with us but it was nice to sail into Nassau with views of the great Atlantis Paradise Island resort. This resort of course is huge and on the property there are dolphins, water parks, marine habitats, golf, spa; lots of activities to take part in!

My mom and I went with another Merit agent and her mom around Nassau to the shops and to the straw market.

That night my mom and I ate at another one of the specialty restaurants, Le Bistro. This restaurant is of course the French restaurant and it had the best food that I had on the cruise. I had Coq au Vin, some nice red wine and of course chocolate for desert. I would say to definitely not miss out on this restaurant if you are on this ship. 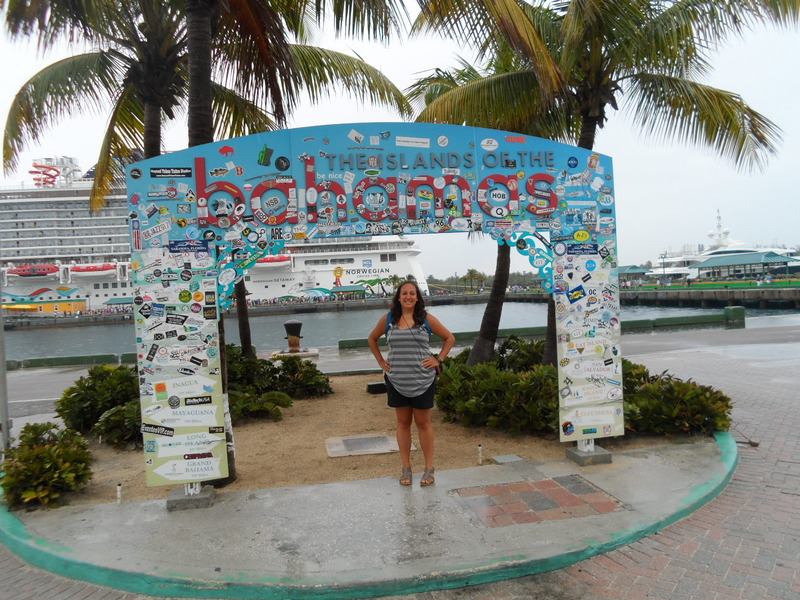 Today was disembarkment day. I had an early flight out of Miami for Toronto, but my mom had a much later flight out of Fort Lauderdale and did a hop on hop off tour of Miami before going home. It is easy to organize these tours with the cruise line and baggage storage is available. I said bye to the Merit ladies in Toronto!