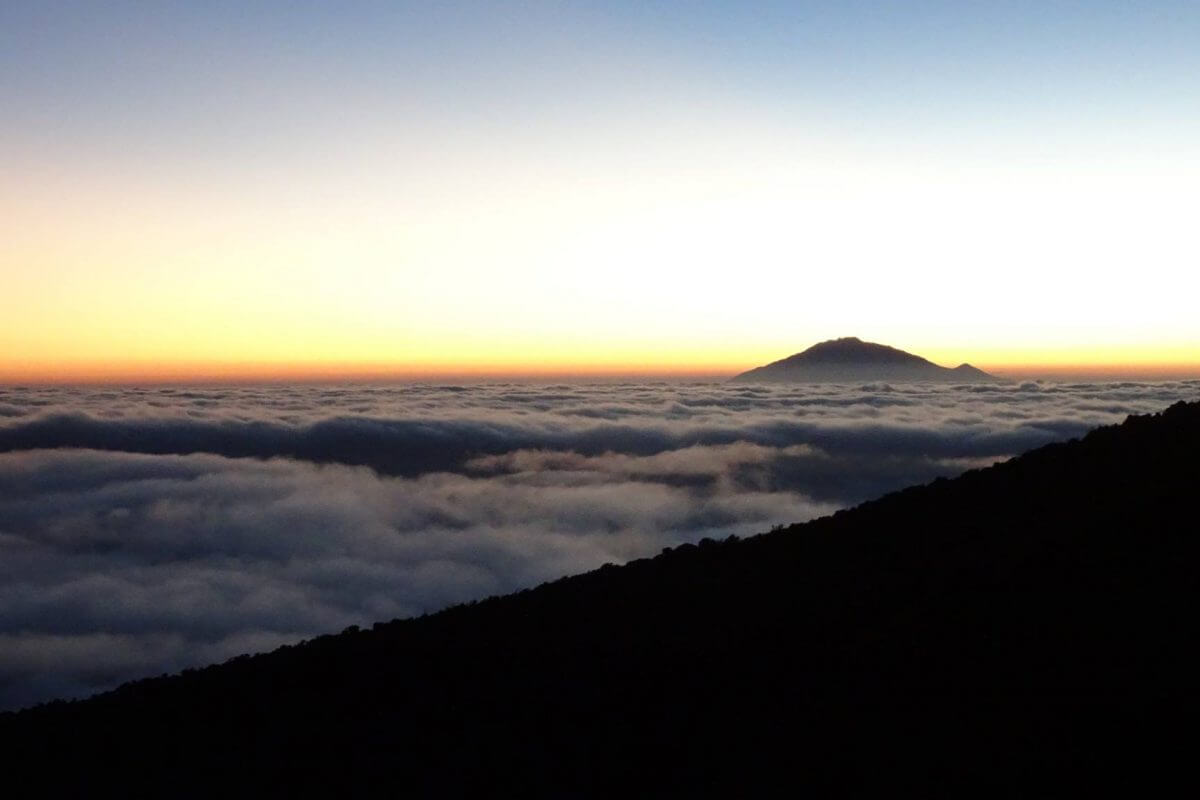 We only had a few hours’ sleep before waking up at 11pm with tea and biscuits for our summit day. As it was a full moon a few days earlier the mountain was beautifully lit by the moon when we set off, bright enough to barely require the head lamps that we had. Someone’s thermometer indicated that it was -10c when we set out, but with so many layers on in preparation for the cold I was actually sweating through everything. After a rock scramble to get out of camp we were slowly, slowly on our way following the line of lights ahead of us. I have always fared well at altitude and never really experiencing the effects aside from loss of appetite. I had chatted frequently with the group in the booking and lead up to the climb about the effects and how a lot of it is sheer will and mental determination to push through it. Kilimanjaro proved to be the mountain that would really challenge me mentally as not too long out of camp I began to feel nauseous and started vomiting. Initially I felt better once it was out of me, but the feeling returned and remained with me until the summit. Spending seven hours vomiting on the side of a mountain makes it very tough to keep going. There were moments where I could barely keep my eyes open and would need to stop at every switchback in the scree.

At some point during our ascent our group split into three small groups of two with one guide each and a spare should one of us need to descend. I was surprised at how many climbers seemed to be on their own as their groups dispersed with everyone’s different paces. I was certainly glad to know that I had someone keeping an eye on me and that the rest of my group were able to trek at their pace with a guide. Feeling retched is bad enough, but if I felt that I was either alone or slowing my group down it would have magnified that feeling. Peter, our guide, was extremely kind and patient during our ascent. He stopped every time I needed to and would start again when I was ready. He would hold me up when I was being sick, rubbing my back and would cover it once I was done like nothing had happened. I never once felt pressured to continue, nor did I feel he would have let me continue if I wasn’t well enough to. Many people were being physically helped to the summit which is something that I don’t agree with. I had contemplated whether I should turn back, but a little tough love from my brother kept me going. Being told that I love the punishment that I put my mind and body through, that I would be devastated if I quit and that it would be very hard for my clients to continue if they saw me come down was exactly what I needed to hear to keep pushing through. Although I didn’t notice the sunrise, which was something that I had really hoped to see, once I realised the sun was on me I started to feel encouraged that I might actually make it to Stella Point – the first official point on the summit. For the last hour a lot of the guides started singing and chanting, which although I wasn’t able to enjoy it was quite nice to be around. Just having something else around me to stop me thinking how retched I felt every step certainly helped. Once I spotted the crater ridge for Stella Point I was on a mission to get to the top to be able to sit down and rest. The last hundred metres or so I set off at quite a pace which my brother couldn’t keep up with me. Initially reaching Stella Point all I could think of was sitting down and nothing more. After a cup of tea and homemade granola bar I was back to life, able to appreciate the view and realise that I had made it to the first official point of Mt Kilimanjaro. Tanzania Parks recognises that you have reached the summit if you make it to Stella Point (5756m) and Uhuru Peak (5895m), the highest point.

Once I had gained some strength back and began to feel alive again it was time to take some photos and continue around the crater rim to Uhuru Point, admiring the view into the crater, or the glaciers, Mt Meru and the cloud below.

After reaching Uhuru Peak a little before 9am I was certainly glad that I had been determined enough and encouraged to continue. It really is beautiful up there and we couldn’t have asked for better weather. Although the temperatures dropped to -20c before sunrise, there wasn’t a wisp of wind the entire time.

It took close to nine hours to summit; the decent was much quicker – it took just under three hours of jumping down the scree back to camp. Even in the bright sunshine Barafu Camp was still very desolate and uninviting from above.

I was happy that we would be having a rest, lunch and then continuing further down the mountain for our final night. We were greeted in camp by our fabulous crew with snacks and drinks at our tent while they dusted off all our gear as we removed it ready for a rest. Although we broke into separate groups on the final ascent, all six of us made it! We were happy to share our stories and experiences over lunch as camp was torn down. As a group we had elected to stay at Millennium Camp – the first camp that would come to on the way towards Mweka gate. It was only a few hours walk to Millennium camp, but the day had clearly exhausted us. We were certainly less chatty that we had been, and were slipping and tripping on our way down. As the fog engulfed us we arrived into Millennium Camp (3950m). We were to be provided with a spectacular sunset over the clouds our final dinner was called. We were all pleased to be settling into our tents for a rest before our final night in Kilimanjaro.

After a long and well deserved sleep, we were up early for the last five hours on the mountain. We knew having elected to stay at the high camp that we would have to be up early as our transport would be waiting for us at Mweka gate. The trail to Mweka camp was a challenge at times on weary legs with some large steps and small scrambles, something that would have created great frustration if we had of walked this the day before.

Before we knew it, the vegetation changed quickly and suddenly to a wide and well-maintained path through the rainforest with birds and monkeys playing in the trees. Everyone began to pick up their pace when the end was in sight. We stopped suddenly a few metres from the end as there was a Colobus monkey perched beautifully on a low laying branch over the path. At all camps we had to sign in and we had finally reached the moment to sign out of the park before we could be on our way. The drive back to the hotel was approximately 1.5hours back to the hotel with lunch provided en-route.

There was plentiful hot water for our much-needed showers. Clean and fresh, it was time to receive our certificates acknowledging that we had all successfully summited Kilimanjaro to Uhuru Peak (5895m). We thanked our crew and enjoyed a few beers with the porters as a thank you for all their efforts – we certainly would not have been successful if it wasn’t for them. Our porters and guides sang for us the Kilimanjaro song, which is modified for every climb depending on the camps you stop at and Hakuna Mata (not the lion King version) before our final farewell.

For the six of us, it was early and quite dinner before calling it a night around 8pm to prepare the next day – either heading out on safari or the long plane ride home.

You can read about my Safari & Zanzibar soon!