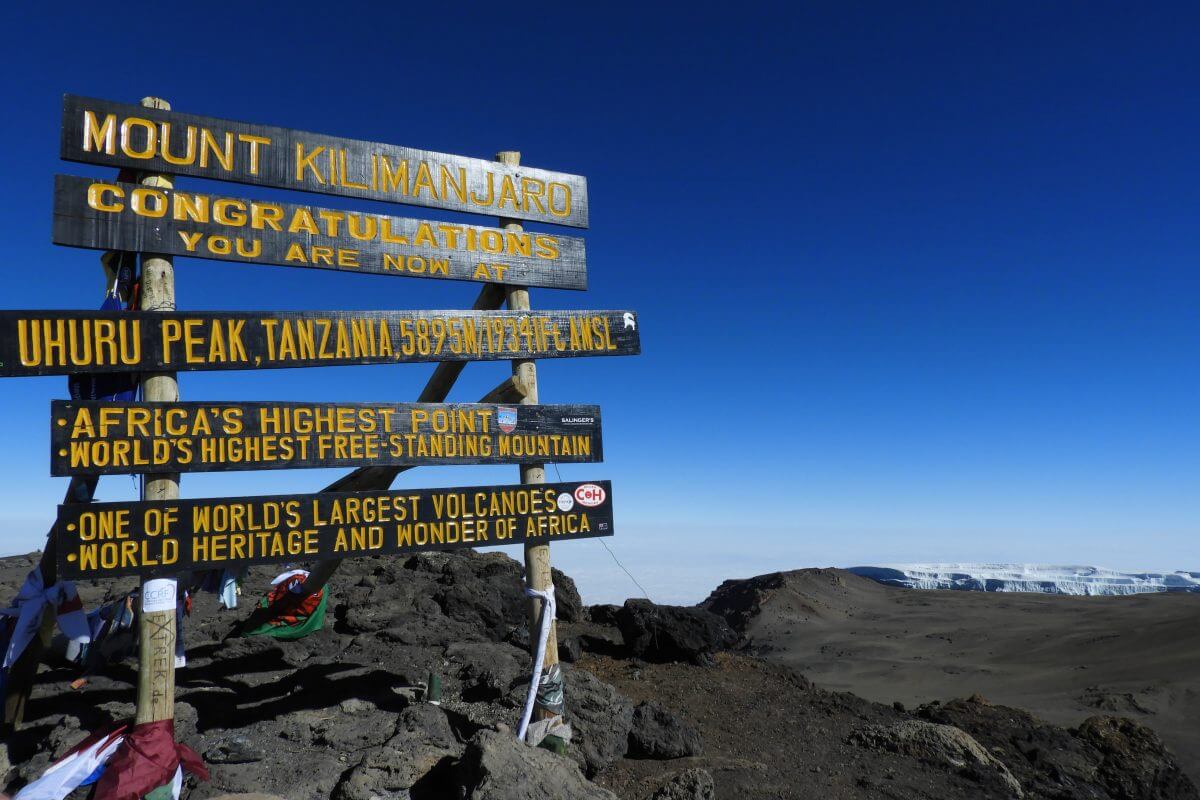 This past September I was fortunate enough to visit Africa for the second time accompanied
by five fabulous clients looking to take on the challenge of climbing Mt Kilimanjaro. After completing my first of the volcanic seven summits, Mt Giluwe in Papua New Guinea earlier this year, I was excited to be undertaking the challenge for volcanic summit number two – this time in Tanzania!

I was hoping to catch a glimpse of the mountain flying into Kilimanjaro airport but unfortunately, I was not only sitting on the wrong side of the plane, but the mountain was also covered in clouds. It’s best to side on the left side when flying in and the right side when departing if you’re hoping to see Kilimanjaro alongside the plane when flying to/from the north.

Although the arrivals process is fairly simple, it can be quite time consuming as there are only a few immigration desks available – obtaining your visa in advance rather than on arrival greatly speeds up this process. After a ninety-minute drive on a surprisingly good road with dusty landscapes, it was a pleasant surprise to arrive through the gates of Marangu Hotel to well-manicured gardens filled with green spaces and flowers.

Marangu Hotel was once a coffee plantation. Once the world coffee prices dropped, it turned into one of the earliest Kilimanjaro climbing operators. The attitude and attention of the staff at the property and on the mountain, was a clear indication that they have been running this operation successfully for quite some time. Along with the manicured gardens, the property is well spread out with small houses throughout serving as guest rooms. There were plenty of shaded spots dotted around to peacefully relax and mentally prepare for what lay ahead. Made to order eggs for breakfast and four-course dinners it was certainly an ideal way to start the trip.

We had a day to rest and prepare, before beginning the climb. We began with a briefing from Seamus about what to expect on the six days ahead. This briefing was far more detailed than any I had previously encountered. Almost two informative hours were spent being educated and chatting about each day’s trekking, where the challenging parts would be, the food we would eat, how to walk, how the altitude would affect us and which symptoms are considered “uncomfortable, yet normal” and the severe cases involving pulmonary and cerebral oedema which would cause a climber to descend rapidly without discussion on the matter. Although it sounds like a long briefing, it was very well organised and the time flew by with all of us feeling a little better and well informed for what we were looking to accomplish. Seamus’s descriptions proved to be extraordinarily accurate in the days ahead. During the briefing we also learnt that our team would be a grand total of 22! Including four guides, a cook, waiter and sixteen porters to carry all the gear. This may sound excessive, however the weight of the porter’s bags are heavily monitored with weigh stations at the start of the trek as well as at each camp site. Having a large crew meant that the loads were reasonable for the porters. Having four guides would turn out to be a great advantage later in the climb.

After our briefing, we were each visited in our rooms by Dora. Dora had a check-list and not only ran through this will each of us, but also inspected all our gear to ensure it was adequate for the trip. If there was something that we were missing or that we felt would be beneficial we were able to borrow it from the hotel. They had everything imaginable to borrow: sleeping bags and liners, water bottles, rain gear, gaiters, boots, clothing and walking poles. We spent the afternoon with a small tour of the local village and surrounding area. It certainly felt good to stretch the legs after such a long travel day. Our tour consisted of seeing one of the co-op farms where they grow coffee and bananas, a beautiful hidden waterfall, a replica of a Chagga village including access to some of the tunnels that they used to use as protection against the Maasai when they would invade during times of drought.

Surprisingly our first trekking day wasn’t too early of a start – breakfast at 730 with our departure to Machame gate for 9am. Over breakfast it was interesting to observe how the porters bags were packed and arranged. It was all very quick, yet surprising to see that large metal boxes would be carried amongst our gear, all of which would be carried on their heads. 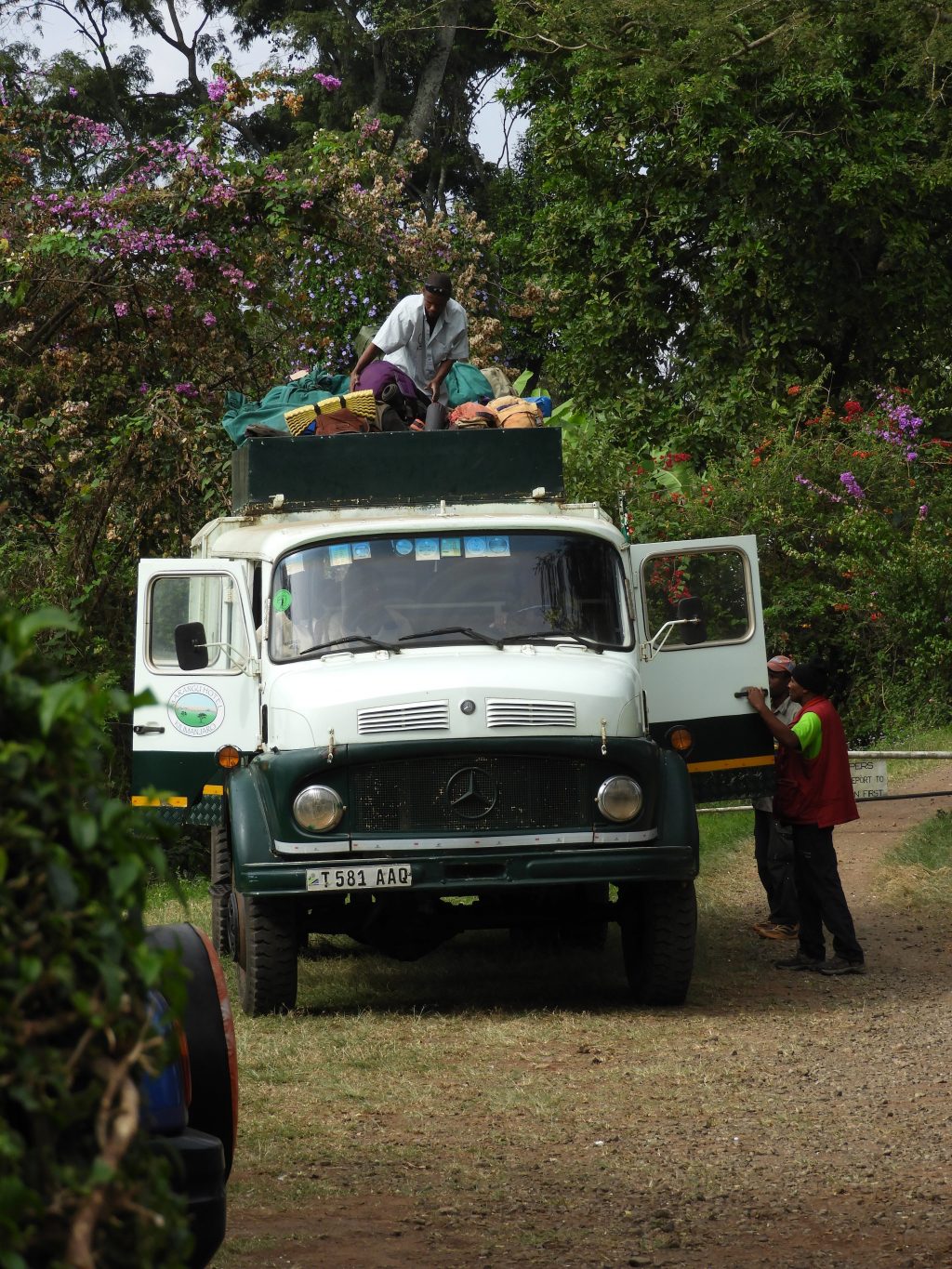 After a two hour drive to the gate we had a bit of a wait while we signed in, our permits were arranged and our porters bags were weighed. Once formalities were out of the way, we were off! Starting at 1743m it was all uphill, on a road that gradually narrowed into a very well-maintained path through the jungle. Although the areas below had been very dry and dusty our morning was quite damp, with vivid greens and moss growing all over the trees as we walked through the clouds for the day. After trekking slowly for close to five hours, all of a sudden the terrain changed dramatically from rainforest to alpine forest just before reaching camp for the evening.

The fog had well and truly settled by this time and we could barely see a few metres in front of us as we arrived in to Machame Camp at 2835m. A quick stop at the office to sign in for the day before finding our camp set and ready for us to settle in for the night. Our tents had been set up, with our gear already placed inside. Once settled we were each provided with a warm bowl of water for a quick wash before heading into the dining tent for pre-dinner snacks and tea, as would occur every evening.

Our meals on the trek consisted of oatmeal, cereal, eggs, bacon/sausages/pancakes, grilled tomatoes and fruit for breakfast with tea, coffee and hot chocolate available. A packed lunch that we would each carry contained fruit, sandwiches, cookies, juice box with hot tea made available. Afternoon snacks upon arrival into camp was popcorn with either muffins or a sweet bread along with the makings for hot drinks. Dinners always started with soup and bread, followed by a variety including roast chicken, potatoes, spinach, lasagne, curry, rice, chips, pasta, salad with fresh fruit for dessert each night. At every meal we always had plenty of food available with many left overs going back to the cook tent for the boys to finish off. We certainly weren’t left hungry!

As I was nicely snuggled up in my sleeping bag early the evening before I was wide awake well before I needed to be on our second day, enjoying the warmth of the tent listening to the birds and campsite slowly come to life. Our wakeup call consisted of a gentle good morning from our waiter or guide, accompanied with a bowl of warm water for washing and a cup of tea or coffee prepared at our tent door each morning – this has to be one of the nicest ways begin a day while camping and trekking! Throughout my travels I have seen some pretty horrendous bathrooms, however, some of the toilets on this trip were the worst I have encountered yet, and was not a pleasant way to start the morning. The clouds had lifted a little this morning, however we were still unable to see the summit of Kilimanjaro when we set off.

Occasionally throughout the day we were able the clouds below would clear and we would be able to see the beautiful views along the ridgelines below. The day was mostly uphill on a narrow rocky and dusty path, with a few rock scrambles to our second camp, Shira Camp at 3750m.

After settling in to camp we took a short walk to Shira Camp II at 3847m to assist with the acclimatisation. It was nice to finally have felt some sun on our bodies and enjoy the views of the ridges disappearing into clouds below while we were surrounded by an old lava flow. The vegetation had now changed to low alpine plants with not a lot of protection around the camp, which made for a much cooler night.

Day three turned out to be quite a taxing day. Our long day started before dawn under the light of the full moon. Finally the clouds had cleared on the summit and we were able to get our first views including the small glaciers that remain.

Although not terribly steep, the morning was consistently uphill to our lunch spot at Lava Tower (4600m). Along the way we were able to spot Mt Meru (4565m) peeking through the clouds and I enjoyed the views of the jagged ridgelines that reminded me a little of trekking in Papua New Guinea earlier in the year. With a little imagination the crater appeared to have a face complete with feathered headdress. Arriving into our highest point of the day at Lava Tower we all seemed quite happy not to be spending the night there as it was quite an open campsite to the elements – very windy and quite cold even in the middle of the day with the sun out. The white backed ravens that we had seen along the way seemed to fly around in large numbers in a very vulture-like way, waiting for crumbs, or what felt like us to not continue any further.

This was the first day where the effects were felt by most of our group. The afternoon was a downhill trek with quite amazing views back to Lava Tower. Before arriving into Barranco Camp (3900m) for the evening we walked through a beautiful path lined with giant groundsels.

The morning of our fourth day turned out to be a lot of fun for me. There had been some trepidation in the group about starting the day on the Barranco Wall – a 300m near vertical rock scramble to get out of the camp. Coming into camp the day before we had been able to see the
trail up the wall and it didn’t look too daunting, however from the camp it certainly looked fairly vertical.

For me, I have always enjoyed heights and climbing and had looked forward to this portion, however I knew this feeling was not consistent with the group as a few struggle with heights and rock scrambles. However, as with the days before we stuck together and helped one another to get to the top much quicker than anticipated. No one in our group froze or freaked out and everyone seemed to enjoy the challenge once it was completed. The remainder of the day the terrain was undulating aside from the final push into Karanga Camp (3995m) for lunch – what looked like a nice stroll around the ridge until we saw the river crossing, a long steep down and up before our only hot lunch would be served.

The afternoon was a steady climb back into the clouds to a very uninviting camp at Barafu (4673m) covered in shale and surrounded by rocks. The heavy fog certainly made the camp feel even more bleak and desolate than it was.

Read the rest of Kaithlyn’s adventure in Part 2 HERE!