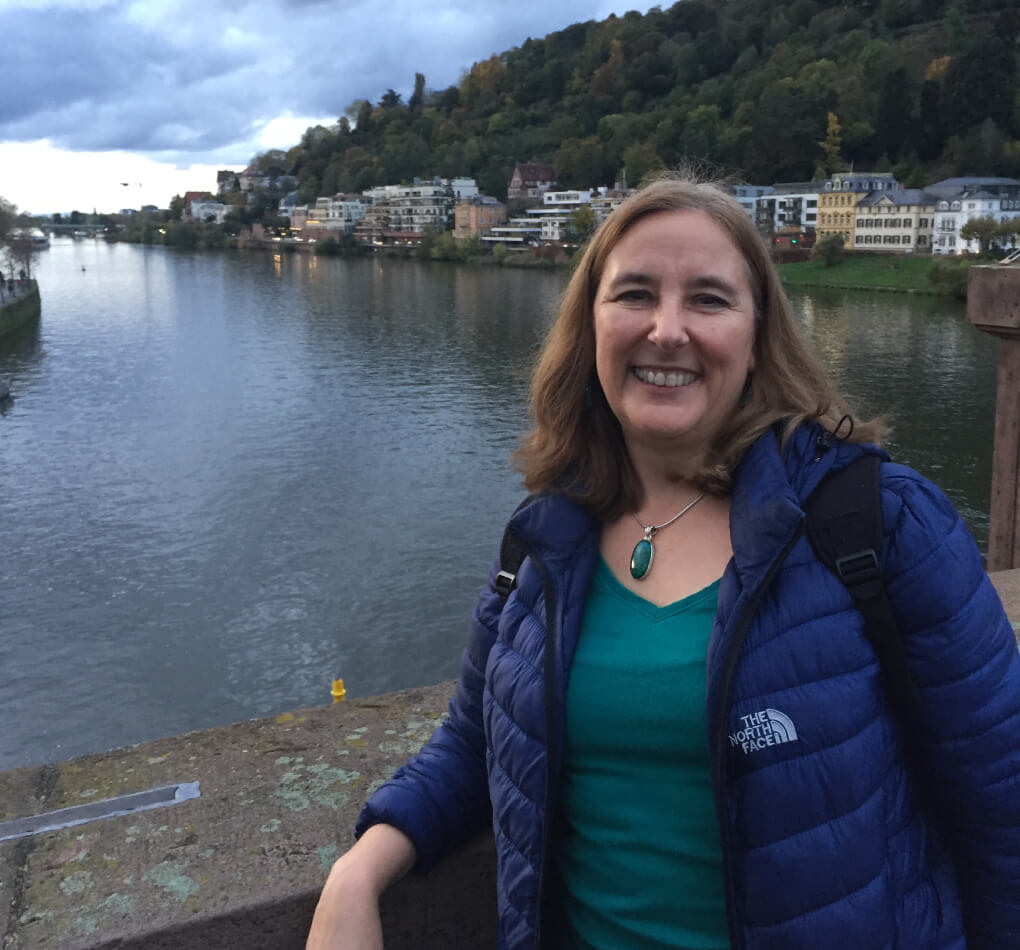 The Journey Is As Special As The Magical Destinations!

Imagine yourself floating down a river in style, through medieval landscapes – a winding gorge dotted with ancient castles.  This was the introduction to my first river cruise down the Rhine from Basel to Amsterdam.

Our home was the spacious Amadeus Silver 2 as we wended our way over 8 days through four countries – Switzerland, France, Germany and the Netherlands. The beauty of cruises is that you unpack once and let the destinations come to you.  I had a preconception that on river cruises you stay on board and watch the world go by.  While there is some of that, a river cruise offers far more interaction and exploring to be done at the numerous town and village visits.   Charming cobblestone towns each have their own character and architecture.  Some buildings erected in the 13th century are still in use!

River cruise boats, unlike ocean ships, are long, low and narrow.  They need to fit under bridges and through locks that are 38 feet wide.  Our boat was 37.5 feet wide to maximize the interior cabin space.  The restaurant and lounge were very comfortable to sit back, relax and view the countryside. Food and drink were plentiful.  Each day the menus featured local fare and wines of the region we were passing through.  Meals and snacks were flavourful.  With smaller portions and a variety of dishes to sample, we had a gastronomic feast.

I was surprised how fast moving the Rhine was at certain points in the river.  The captain maneuvered the boat deftly and smoothly to adjust to the perfect speed and passed through the many locks easily.  Upper floor cabins are best for the views and the size of the windows, while the swan view / lowest floor are darker as the smaller windows don’t open and wi-fi reception at the water level can be dodgy if you are someone who prefers more quiet to get to sleep or more sunlight during day hours when you are in your room. Before departing Basel, my fun and fabulous group of like-minded travelers and I walked through the old town to the cathedral square where a winter carnival was in progress, complete with ferris wheel, games and puppet shows for the kids. 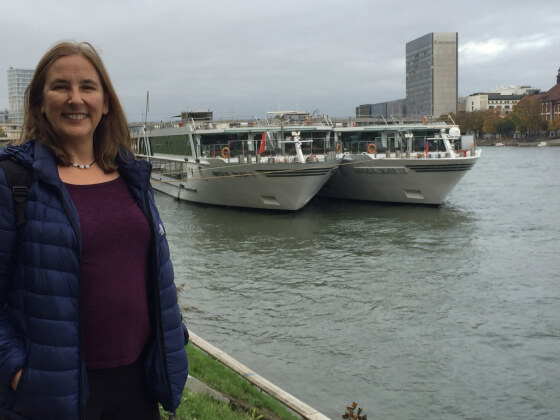 First stop was Strasbourg.  Currently it is French, and it has flip-flopped throughout history like a ping pong game between Germany and France.  Beautiful Tudor architecture and what history!  Did you know – The French hymn ‘Viva la France’ was first sung here outside the parliament buildings before it was presented and adopted in Paris?

Manheim is a lovely, cobblestone town.  From here we took a bus to the nearby hillside castle of Heidelberg.  As we wandered through, we learned from our wonderful local guide provided from our ship, of the deep love between Fredrick the Fifth, also known as the Winter king, and Elizabeth Stuart whose marriage created an alliance of the German and British royal families in the 1600’s.

In Speyer we counted the numerous church spires that dot the city.  If you have the time, the information centre offers a treasure hunt – an interactive way for you to explore the city on your own.  Or you can sit back, relax and watch the world go by while you sip some espresso, thick hot chocolate or gluhwein (mulled wine) while sampling delectable pastries.

In Rudesheim we rode open air gondolas above a vineyard to a hilltop war memorial.  From there we viewed the lovely autumn colours of the river valley below.  Afterwards we warmed up in a cafe with a taste of the town’s famous Asbach coffee, complete with brandy and whipped cream.  No wonder we had a spring in our step for our walk back to the ship. 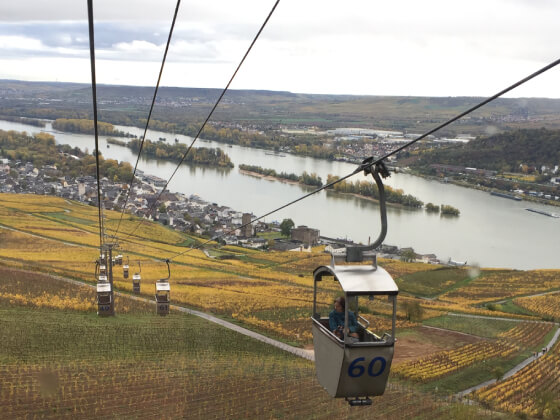 In Koblenz we were at the confluence of the Rhine and Moselle rivers.  The name Koblenz literally translates as confluence.  We detoured up the Moselle river via ship locks to Cochem, which is the last navigable town before the river gets too shallow and twisty for boats.

Cochem is a medieval village.  So many winding alleys to explore, and so many cake shops to sample.  Some of us decided to walk up the hill to the castle (to walk off some of the desserts). We took a tour and learned about some of its rich history and admired the unusual interior decorations that combined styles from different eras rather effectively.

Back on the Rhine we entered the gorge that stretches between Koblenz and Mainz enroute to Cologne.  This is the Mittel Rhein (middle of the Rhein). This is where the beautiful and mythical Lorelei sings and lures sailors to her rocky shores.  It’s where you will see more castles than you can shake a stick at.  Most hilltops are dotted with either a ruin or an ancient castle that is still in use.  In the middle-ages, kingdoms changed hands frequently and robber barons collected tolls from passing ships.

In Cologne I was lucky enough to meet up with a distant relative and enjoyed catching up over coffee.  The city’s large cathedral was damaged in World War 2 but withstood the onslaught much better than the rest of the town which is why the town looks so modern. The cathedral square hosts one of the largest Christmas markets in Germany.  Many visitors are drawn to the festivities, food, gifts and entertainment. 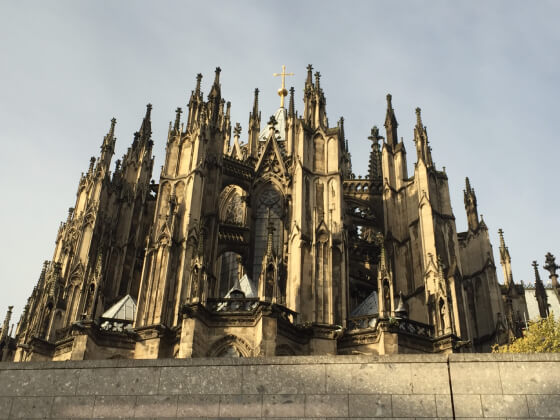 Upon reaching the Netherlands, we disembarked in Hoorn, which means horn or nook, referring to the shape of the harbour and what was home to the Dutch East India Company.  As great seafarers, the Dutch named South America’s Cape Horn after their own town of Hoorn! From here we took a bus to Amsterdam via Edam where we stopped to learn about cheese making.  My bags were noticeably heavier after sampling and purchasing various flavours of Gouda cheese (locally/correctly pronounced How-da), not to mention the chocolates, jams, jellies and spreads.  Everything was so yummy! 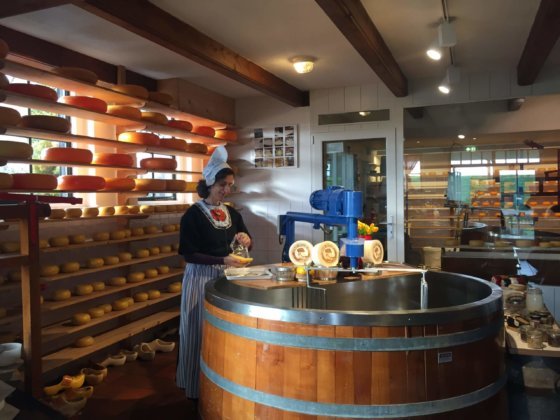 After a sunset canal cruise in Amsterdam we were sad to say goodbye to all our new found friends on the cruise. River cruising is a relaxing and fun way to explore the waterways that helped establish cities and kingdoms in olden times.  I now look forward to exploring other parts of the world through river cruising.